The design of Shaker

The difficulty presented by a sans serif design is how to evenly distribute the detailing which will give the font its overall personality and character.

No one letter should carry all the style, conversely too much style added throughout could result in a poor text type. Shaker began as a sans serif compliment to the Enigma typeface. Although being its own design, it needed to share similar proportions and carry enough visual reference to Enigma to convey a family likeness. 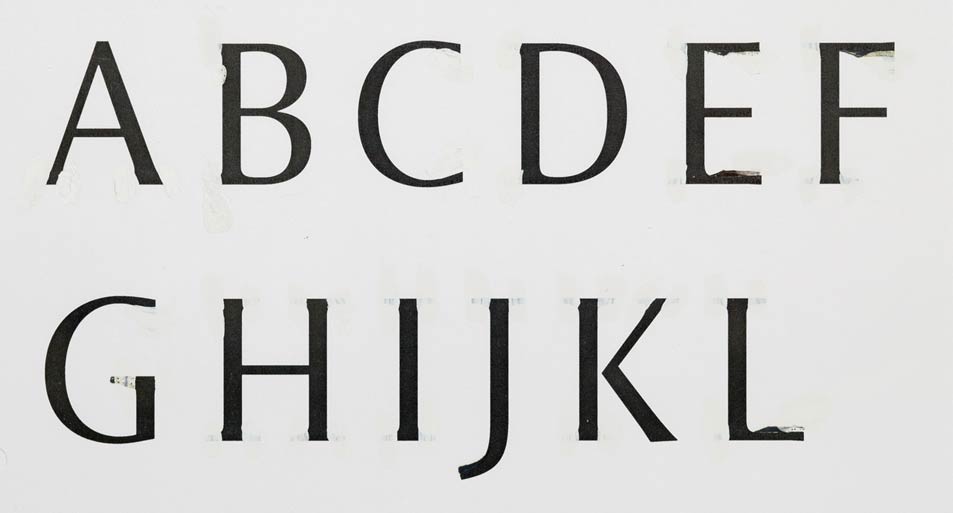 1. Painting out the serifs of Enigma and also a tentative look at the detailing of E, F and L 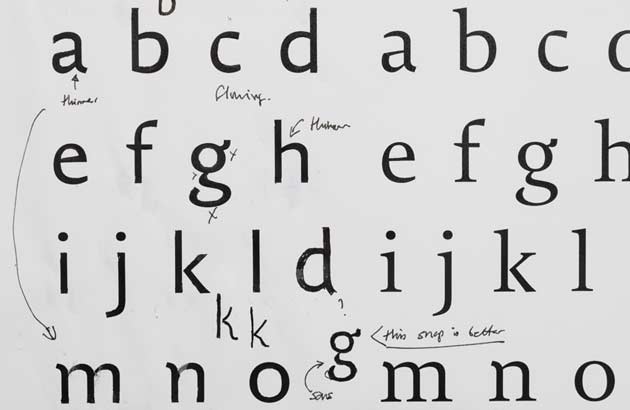 2. Serifs removed and a more even line inked over the Enigma letters 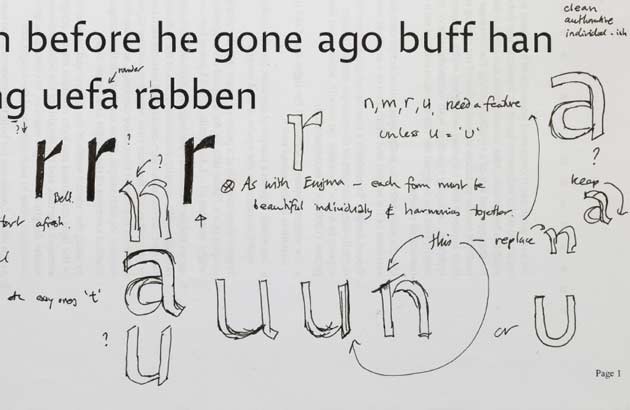 Initially serifs were removed from Enigma, and stem weights evened up [fig 1]. This is a rough and ready approach in order to get a quick impression. Originally a more monoline design was considered. However, trying to balance the visual texture seen in Enigma, created problems across the character set with a more even line weight [fig 2]. 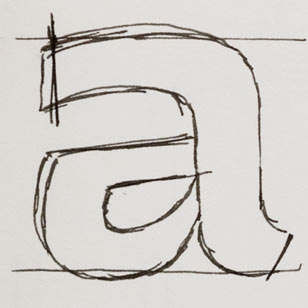 4. The bowl of Enigma a has a definite cut which appeared too aggressive in the sans 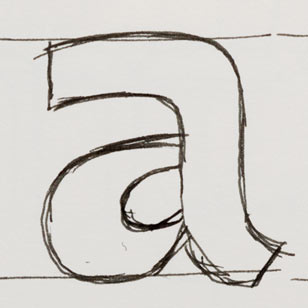 5. The softer, more fluid bowl of Shaker a

One of the core features of Enigma is the use of distinct cuts to the inside curve of several letters. These contribute to its visual texture [fig 2]. This cut feature has a calligraphic origin resulting from the movement of the pen as it travels along the ductus of the letter. Incorporating this as a definite, even exaggerated, thin point disrupted the consistency of the monoline when seen across a collection of letters [fig 3]. So to balance the typographic image, weight had to be removed from other letters in order to create an even rhythm. 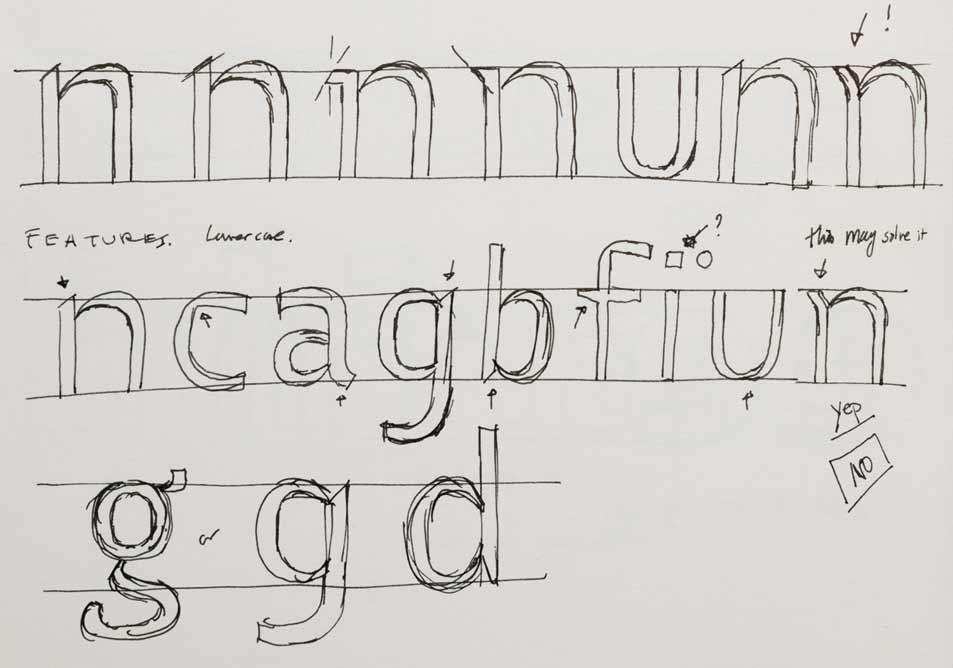 6. An early sketch looking at a variety of treatments to reflect the rotunda-style stroke seen in Enigma

Another core feature of Enigma is the pronounced rotunda-style lead-in stroke found on several lowercase letters. Various options for this were tried but proved too overpowering in some situations and jarred with the simplicity of the developing design. As the character set developed some letter shapes were simplified, especially the g and u. For instance, the u shares the same design as the capital U, having no leg and stems of even weight [fig 6]. 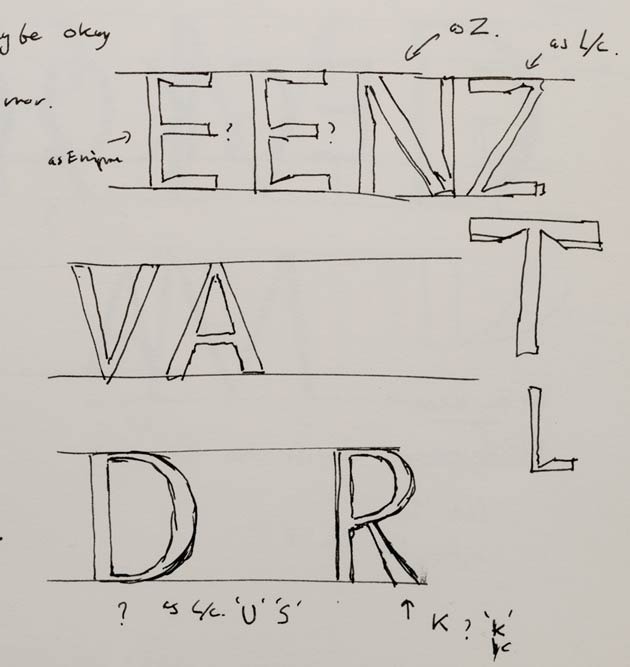 7. Cuts and tapered strokes incorporated across the capital letters 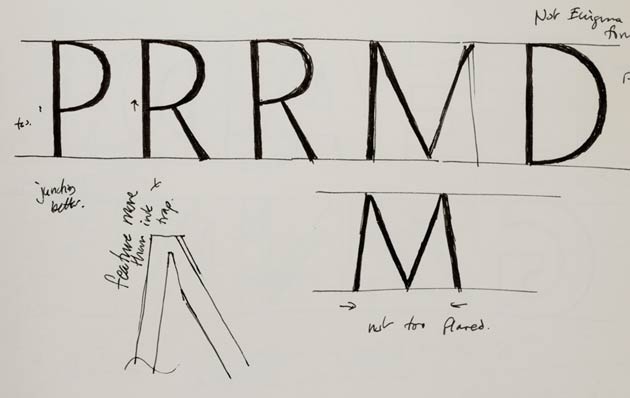 8. Bowls taper as they join a vertical stem

Sans serif capital letters generally offer little room for stylistic detailing. In order to balance those of Shaker with its lowercase, a certain degree of modulation needed to be incorporated. As well as variable weights for horizontal and vertical strokes, cuts were added to several horizontal stems [figs 7, 9, 13]. This was developed further as tapered strokes in letters with diagonal stems in order to create a visually balanced rhythm [figs 8, 9]. 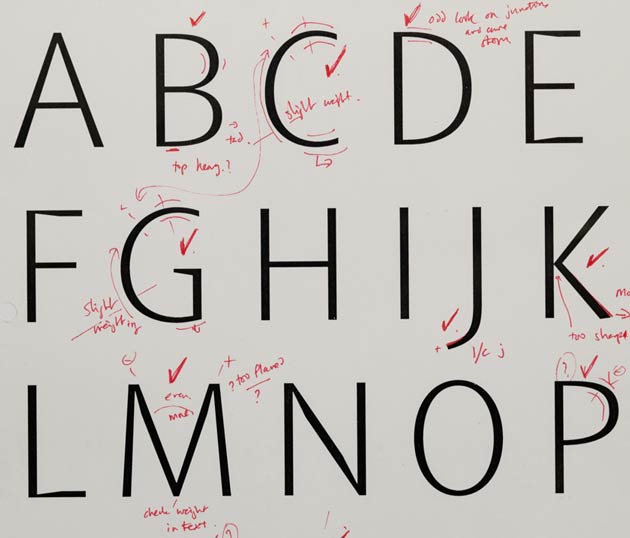 9. Stage development of the capitals 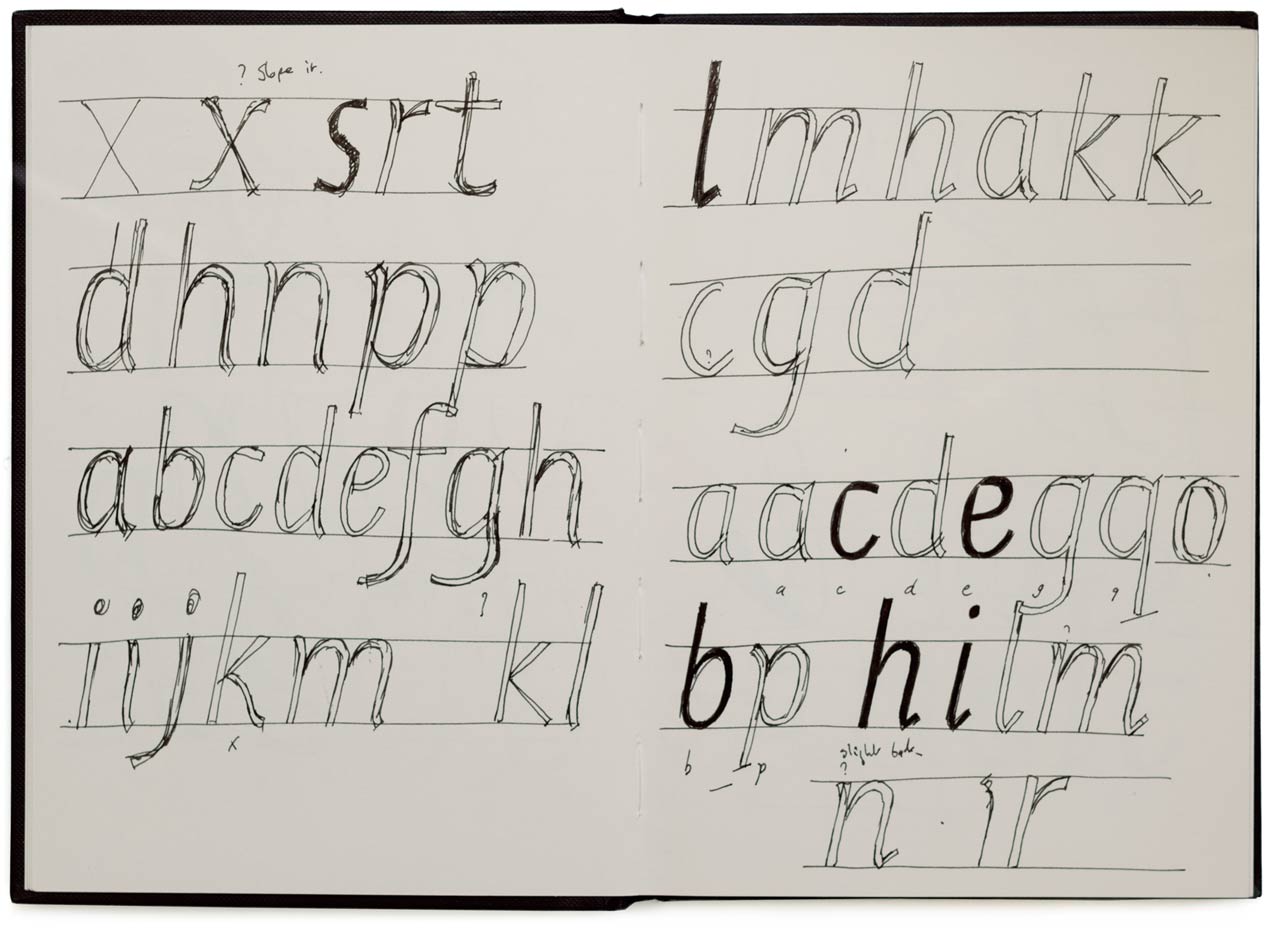 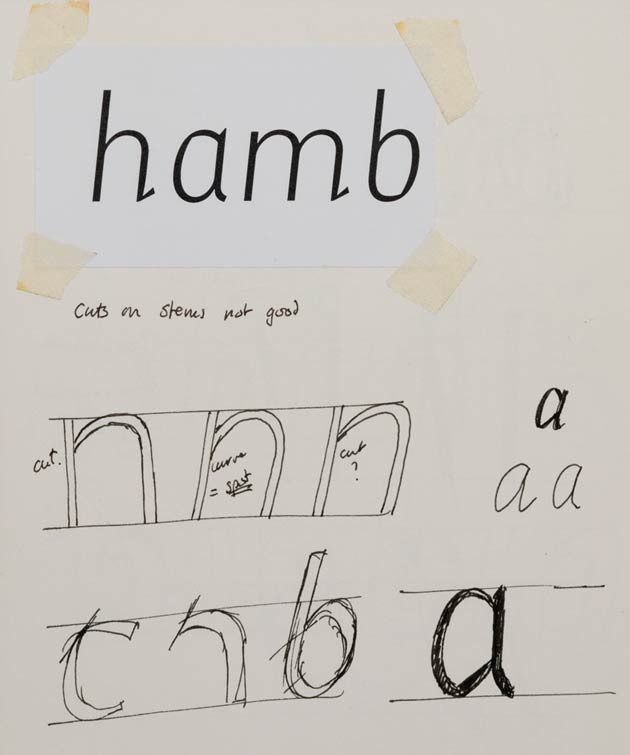 11. The modified flick on the h and m is clearly not working, especially when seen alongside the developing a 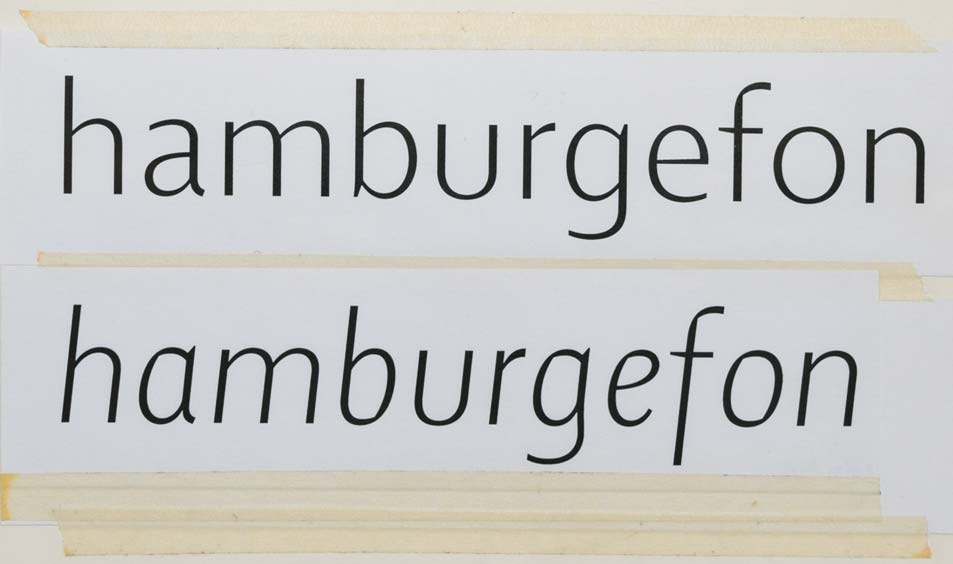 12. A more resolved lowercase in both roman and italic, though the italic is still lacking a final detail

In their simplicity, sans serif types are able to withstand a huge degree of modulation. They can be compressed, stretched, made thin or heavy and, to come extent, still retain their basic styling and character. From the start of the project it was always intended that Shaker should also have condensed and wide versions. Throughout the development of Shaker, variations of width and weight were explored. A careful eye had to be kept on the variable stroke weight and especially the cut details, which had to be restrained in the light weights but still retain a little sparkle. 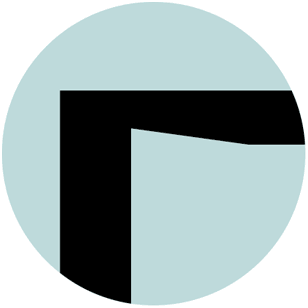 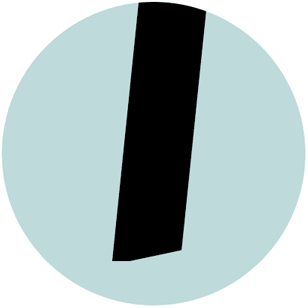 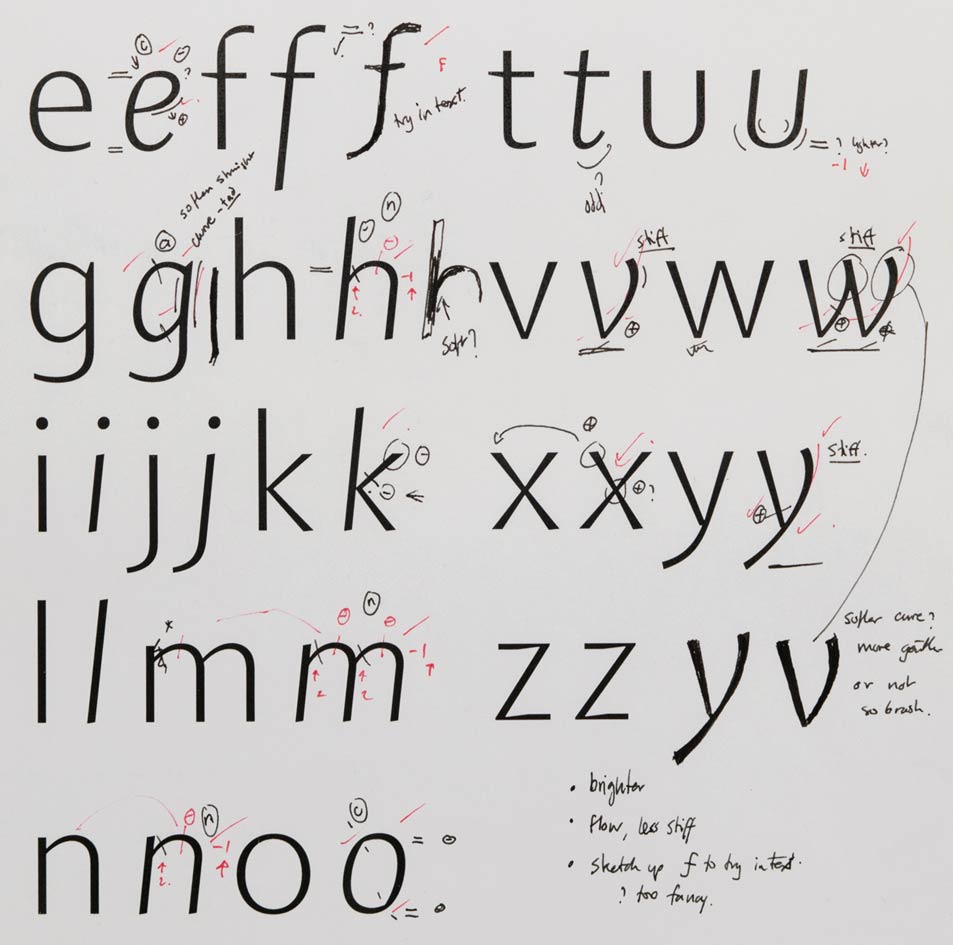 15. This stage development compares both roman and italic. The italic now incorporates an angle to its vertical stems 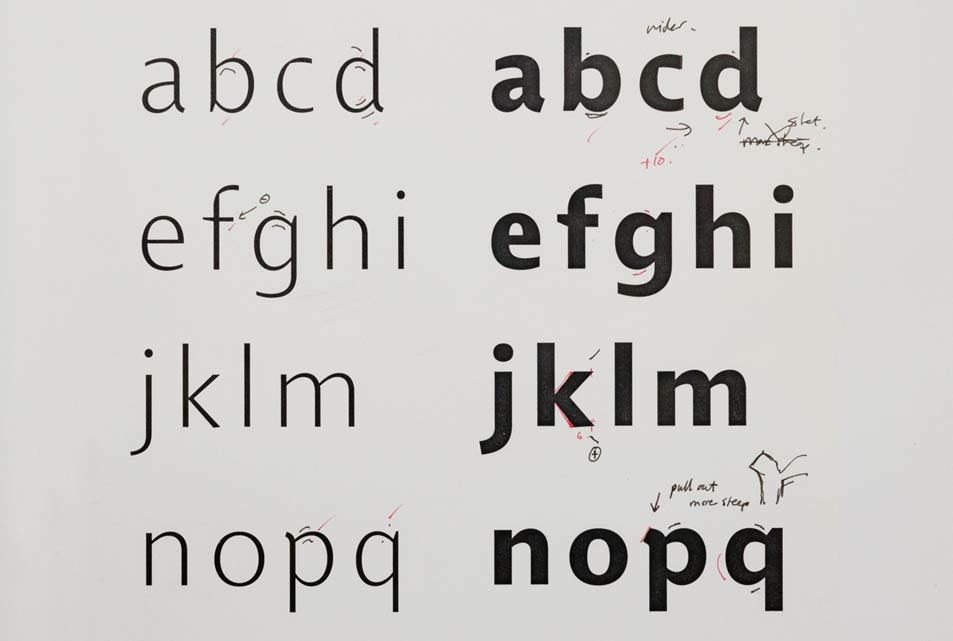 16.Stage development comparing the proportions of Light and Heavy