The design of Christchurch Gallery

Treating a typeface as a work of art on display. This was our approach to the type for the Christchurch Art Gallery in New Zealand.

We were commissioned by Strategy Creative in 2001 to initially design a type for signage use. This soon changed as we explored what a type could be, how far it could go, and how intrinsic to the identity it could become. The final typeface has been extended and made available for public use as Aspect.

1. Crowds gathered on 10 May 2003 for the opening of the new Christchurch Art Gallery building 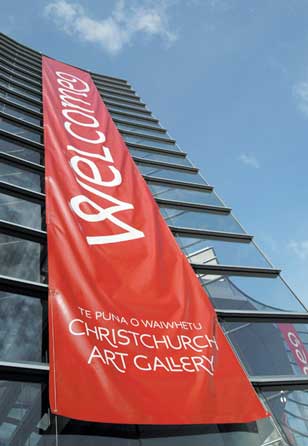 2. One of the huge banners hanging outside the gallery 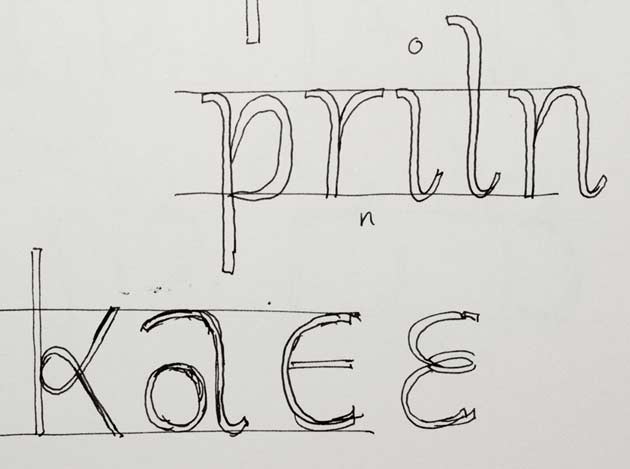 We were keen to develop a typeface using the potential of the then new OpenType technology. This allows for multiple glyph variants to be made available to fine tune a text. The vision was to make the fonts alive, letting them flow and express themselves beyond purely a static vehicle of communication. To treat the typeface design as a piece of art; one that connects the art collection with the building and the ambitions of the gallery. 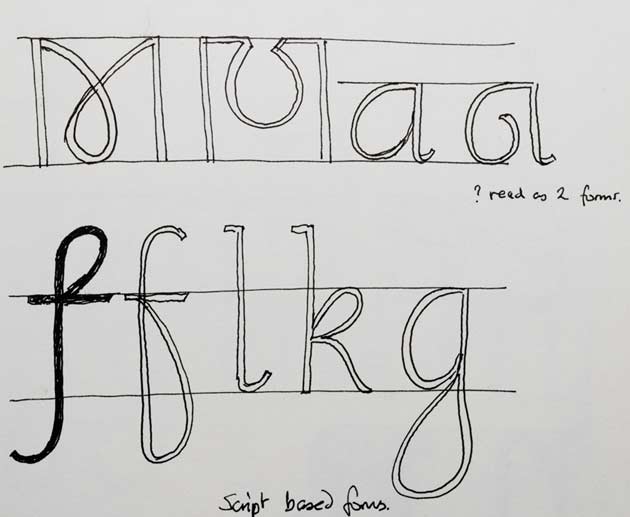 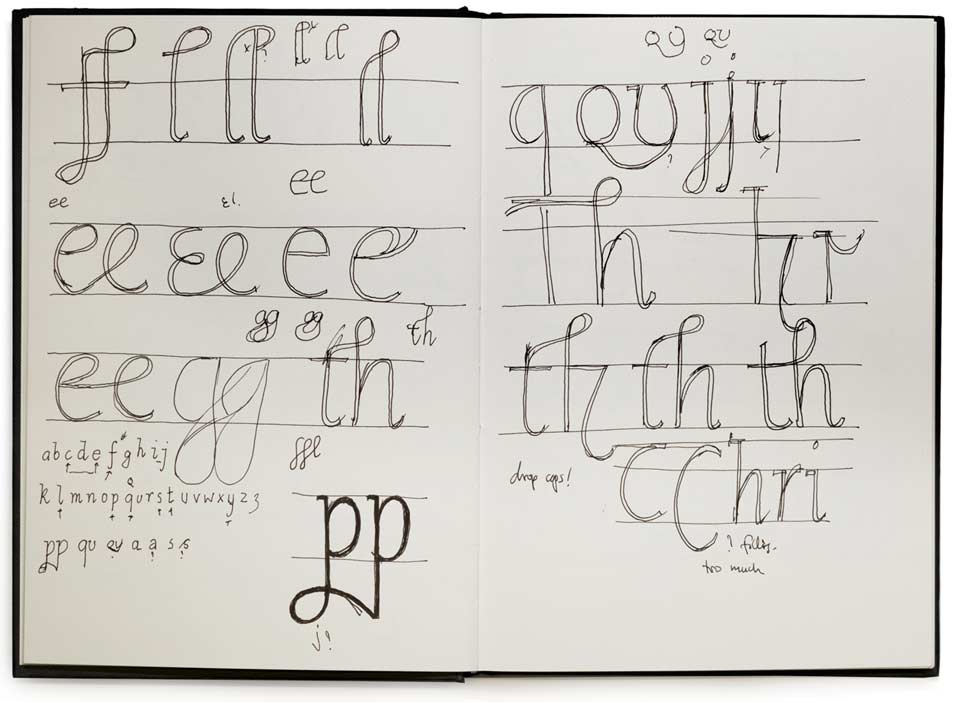 Strategy liked our Blue Island typeface that we’d designed for Adobe and suggested a sans serif version of it. Not keen on this approach, we looked to how the flamboyance of Blue Island could be reinterpreted. This led to researching various scripts and ideas for more fluid and unusual letter shapes [figs 3—8] . However, a calligraphic script didn’t have the right feeling or stature for the range of uses required by the gallery. Strategy wanted the brand elements to be immensely flexible; functioning equally well beside historic oil paintings as well as vibrant modern sculptures. The task was to make the script less script and to be able to dress it up when required, so it can perform at different levels. 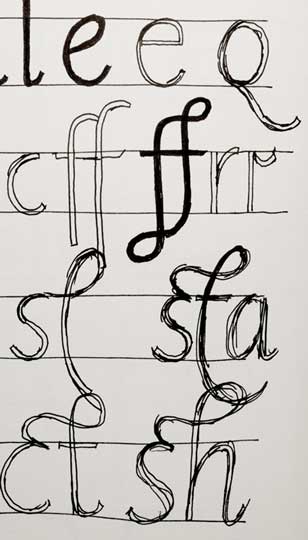 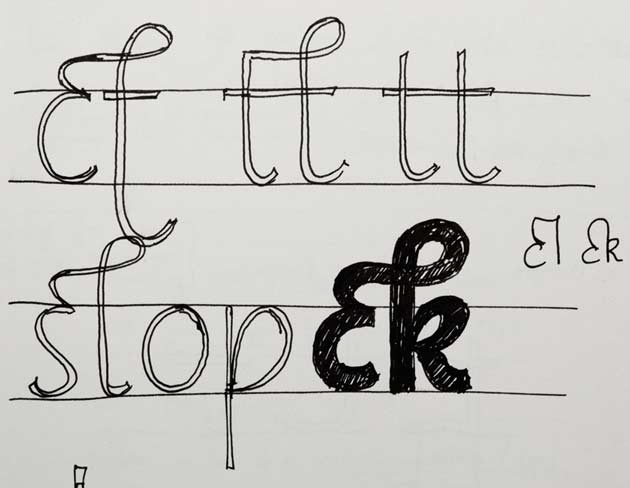 8. An early look at the chunky bold weight 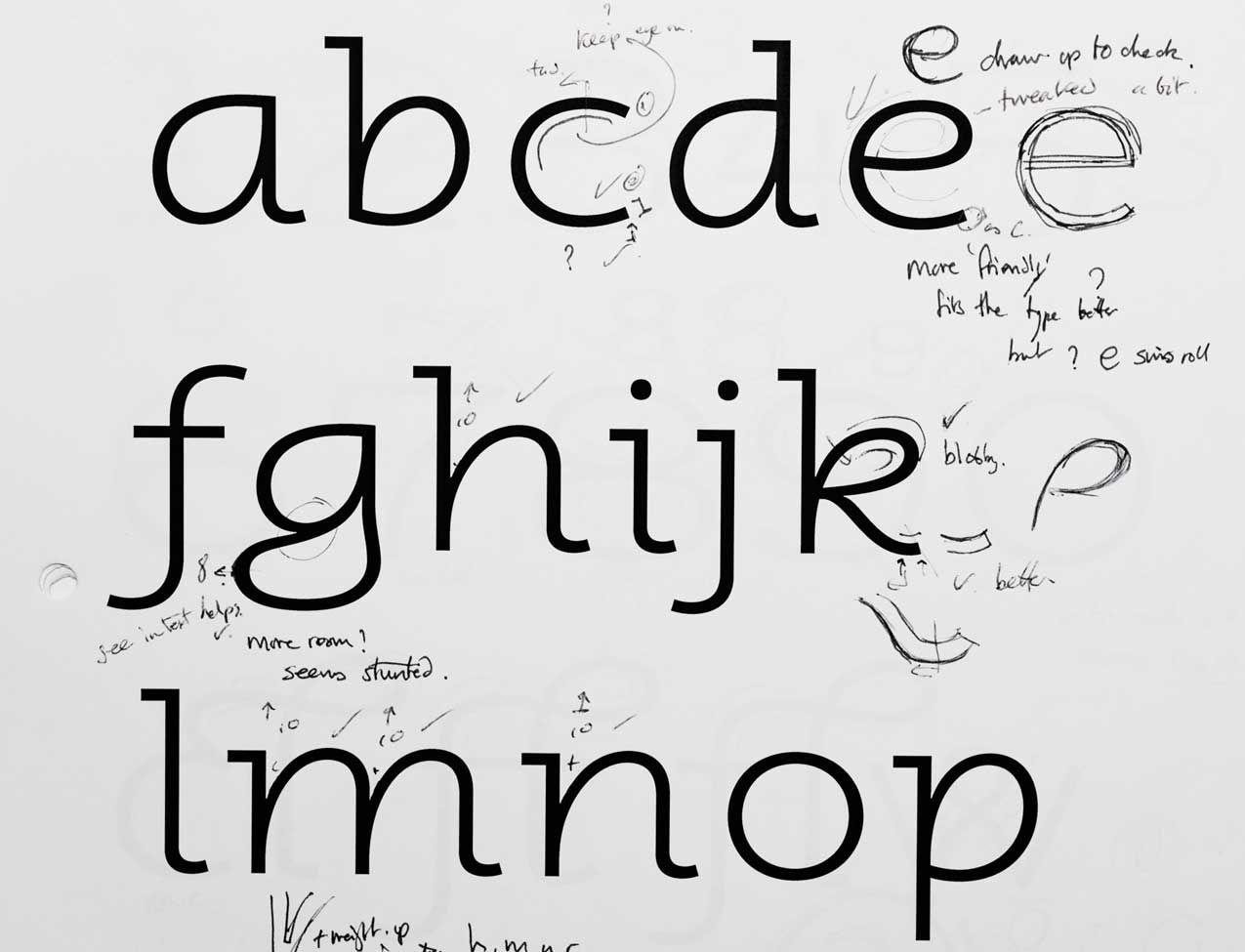 9. Stage development of the lowercase

There are certain characteristics that make an italic, italic; such as its inclined appearance. We accept that an italic appears at an angle however, there are historic examples of upright italics. There are other things that contribute to and influence our perception of what an italic is. Italics are generally narrow and can be space-saving, which as a consequence makes them perhaps more economical. As the design developed, the overall width of the letters was increased. Another important part that informs our perception of an italic is a modulated line. The natural result of using a pen at an angle to create the stroke. Historically, the design of a pen nib would allow for thick and thins, the invention of the ball point pen removed this, resulting in a consistent line. It seemed logical to remove this variation and at the same time perhaps bring a more modern feel to the letters’ structure. So the stems of the letters were made monoline. 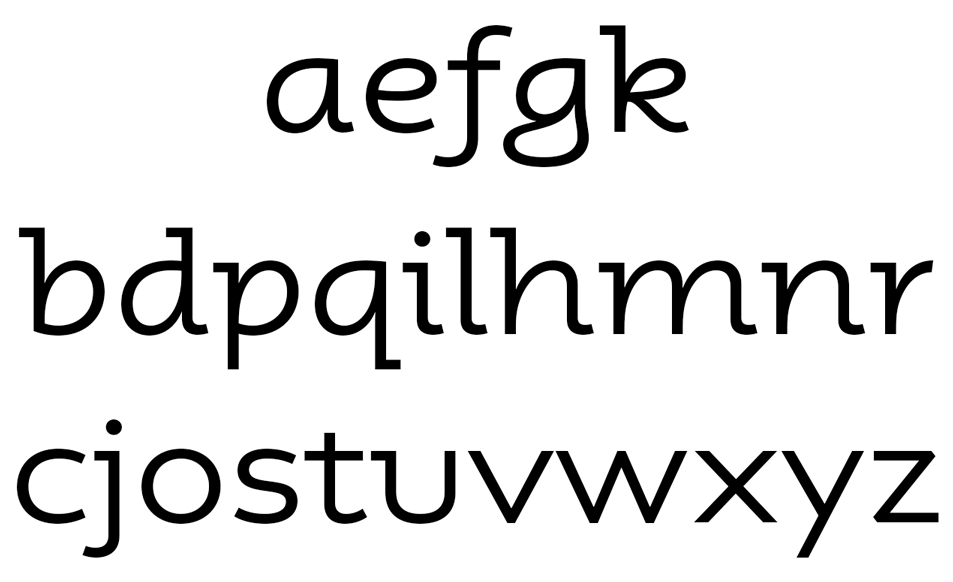 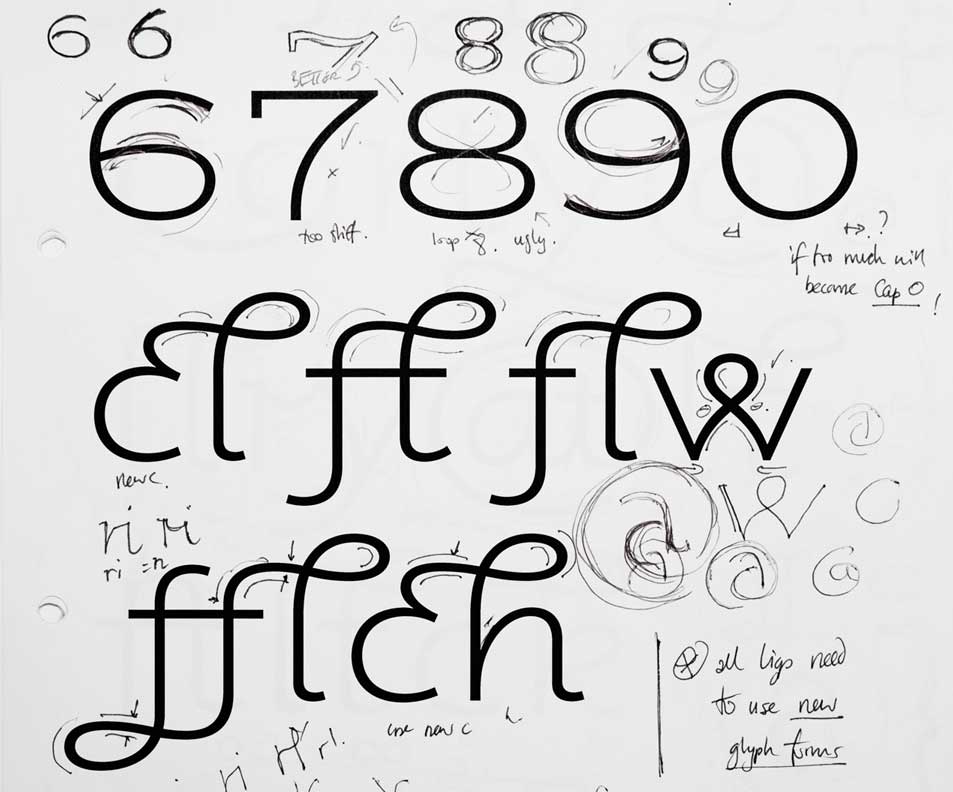 Italic letters flow, often made in a single pen stroke that can join together as a ‘running hand’. This action also makes them naturally more condensed in appearance. The fact that they are the result of being written is fundamental to them being considered italic instead of sloped. Removing this structure would kill the idea of italic. So instead of eradicating all movement in a letter’s construction, it was rationalised. For instance, the in-stroke of a lowercase n was made into a serif and the out-stroke was formalised into a curl. Finally, the character set was divided into groups of letters – some that maintained the italic structure, some that had modified elements of italic, and some that had no italic traces at all. The resulting lowercase balances roman and italic, it’s a hybrid [fig 10]. 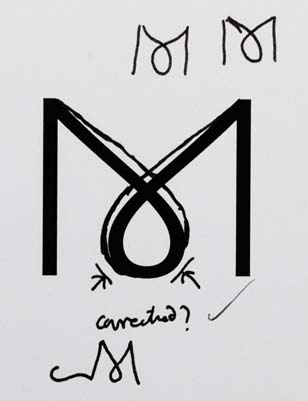 After the core letters had been arrived at the next step was to add the variants. This was achieved primarily through the use of swashes and ligatures [figs 11, 12]. Customisation of a word or headline might be limited to the considered use of a single special character such as an alternate or swash, or the letters could take on the flamboyance of an elaborately ligatured swash. Turning everything on is a little hallucinogenic — perhaps there’s the art. 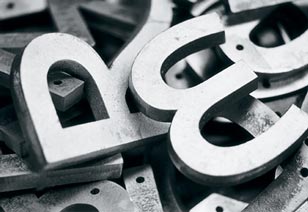 13. Letters being cast in metal for signage use 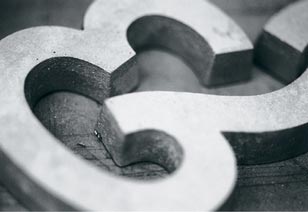 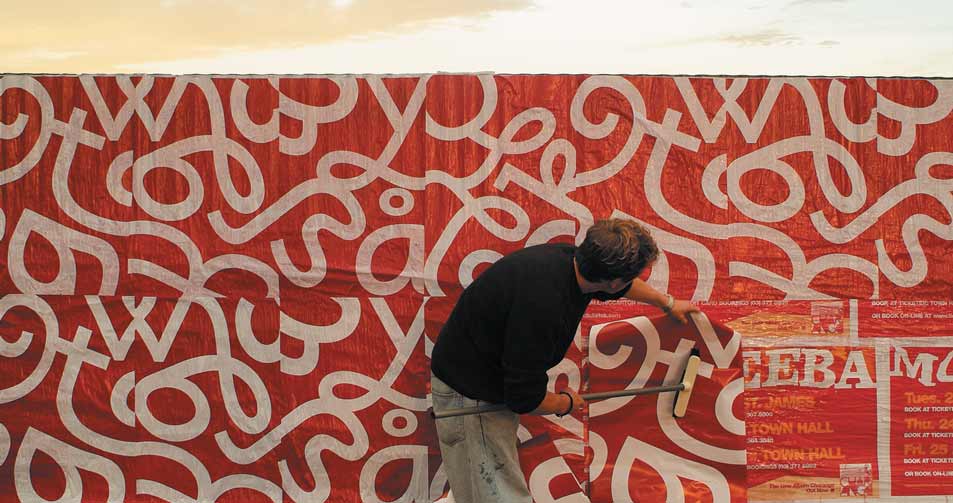 15. Abstract posters using the typeface were put all over the city prior to the launch day 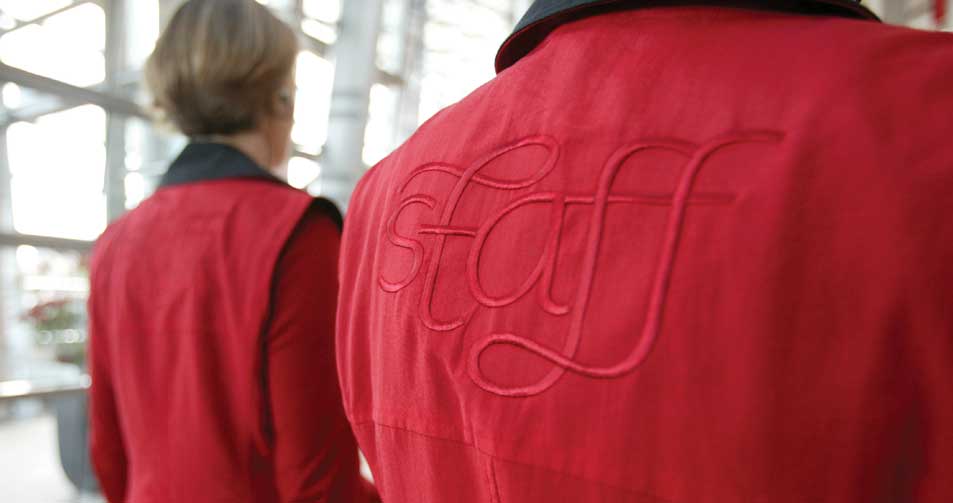 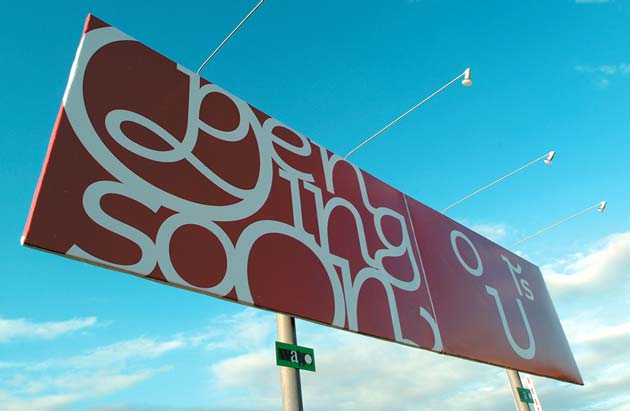 17. A huge billboard leading up to the public opening 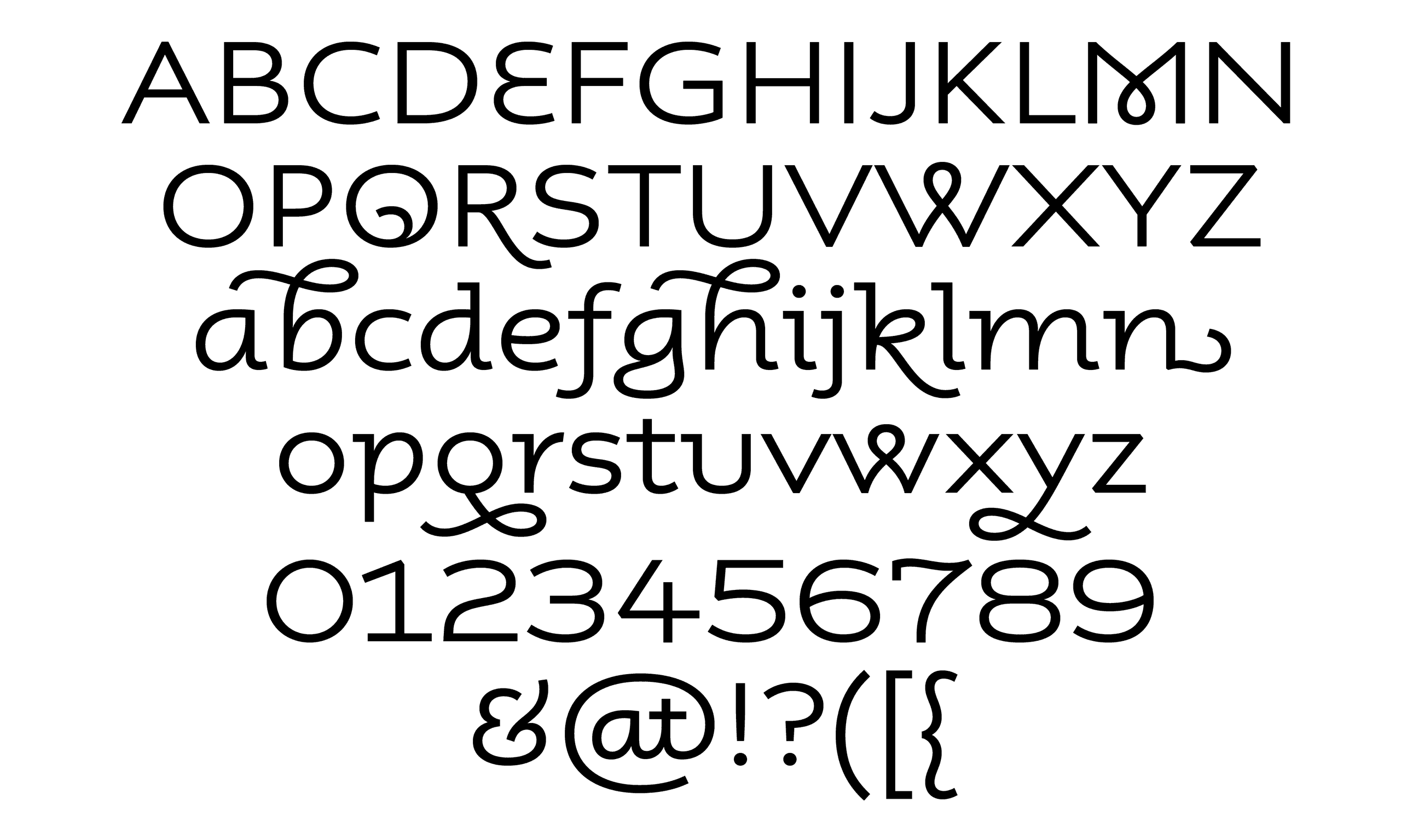