The design of Blue Island

1. Sketch for a linked logotype

The typographic image, and how this can be manipulated to create new and interesting shapes, is continually fascinating.

Requirements made on typography continue to change with time, new technologies bring new ideas that often require new designs. The intention for a design may sometimes be simple and pure or complex and eye-catching. Whilst working at Wolff Olins in the mid-90s I was developing a range of ideas for a client’s logotype, one of the ideas was to build the brand name from interlocking letters [fig 1]. 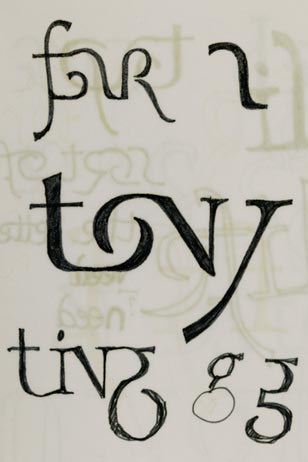 Instead of joining the letters physically, one idea was to create joins visually by making letters out of elements of other letters. A swash or extension of one letter could stretch out and create part of another letter [fig 2]. The logotype didn’t get anywhere, but the concept fascinated me. Could a typeface be created that relied wholly on this principle?

3. Early sketch exploring how letters could run and link together

The idea pre-dated OpenType technology which can easily substitute alternate glyphs to solve linking problems. However, a huge amount of the joy of designing this typeface was to try and make something balance with the limitations imposed by the technology, and not to rely on alternate characters [figs 3, 4, 5]. It’s fair to say that a typeface like this, possibly wouldn’t be designed this way today – the temptation of the technology is too great a distraction. 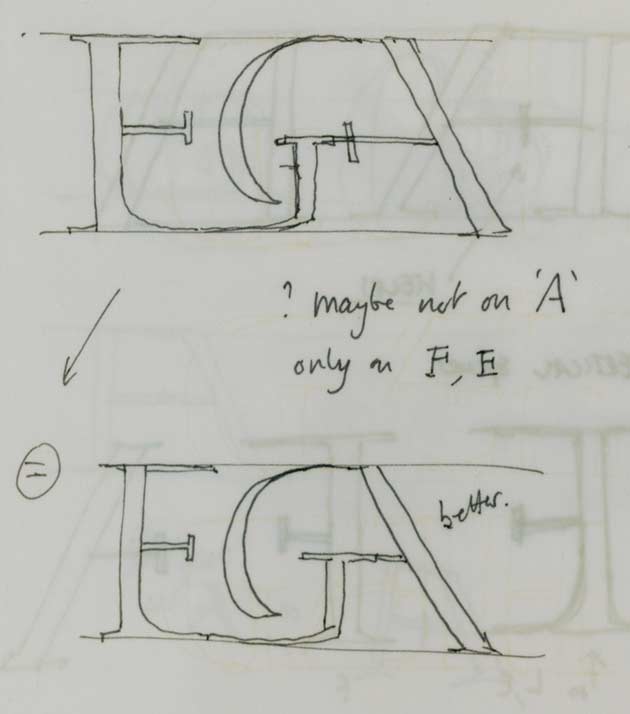 4. Can the continued strokes of an E and an A make the letter G? 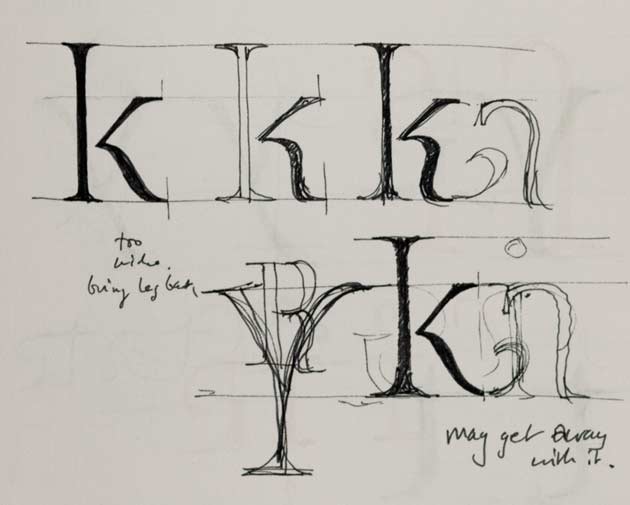 5. Both the leg and the arm of the k need to create a link, but this can cause optical and spacing problems 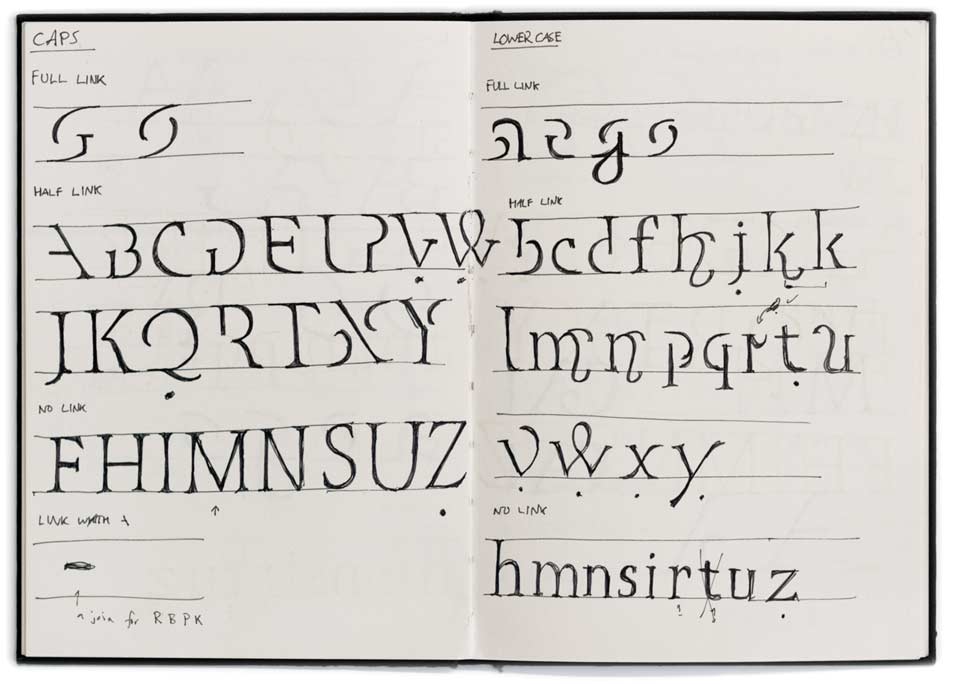 6. Sketchbook page showing letters grouped according to how they link

Early sketches focused on how connections could be made and what part of a letter could be reworked into part of another letter. For instance, the bowl of the a was detached and reversed to become the flourish of the c, l, n and so on [figs 5, 6, 7]. Some worked, others refused to which resulted in several characters growing additional limbs [fig 7]. This in turn created spacing problems, and the additional limbs unbalanced the character set requiring other letters to adopt more exotic shapes. 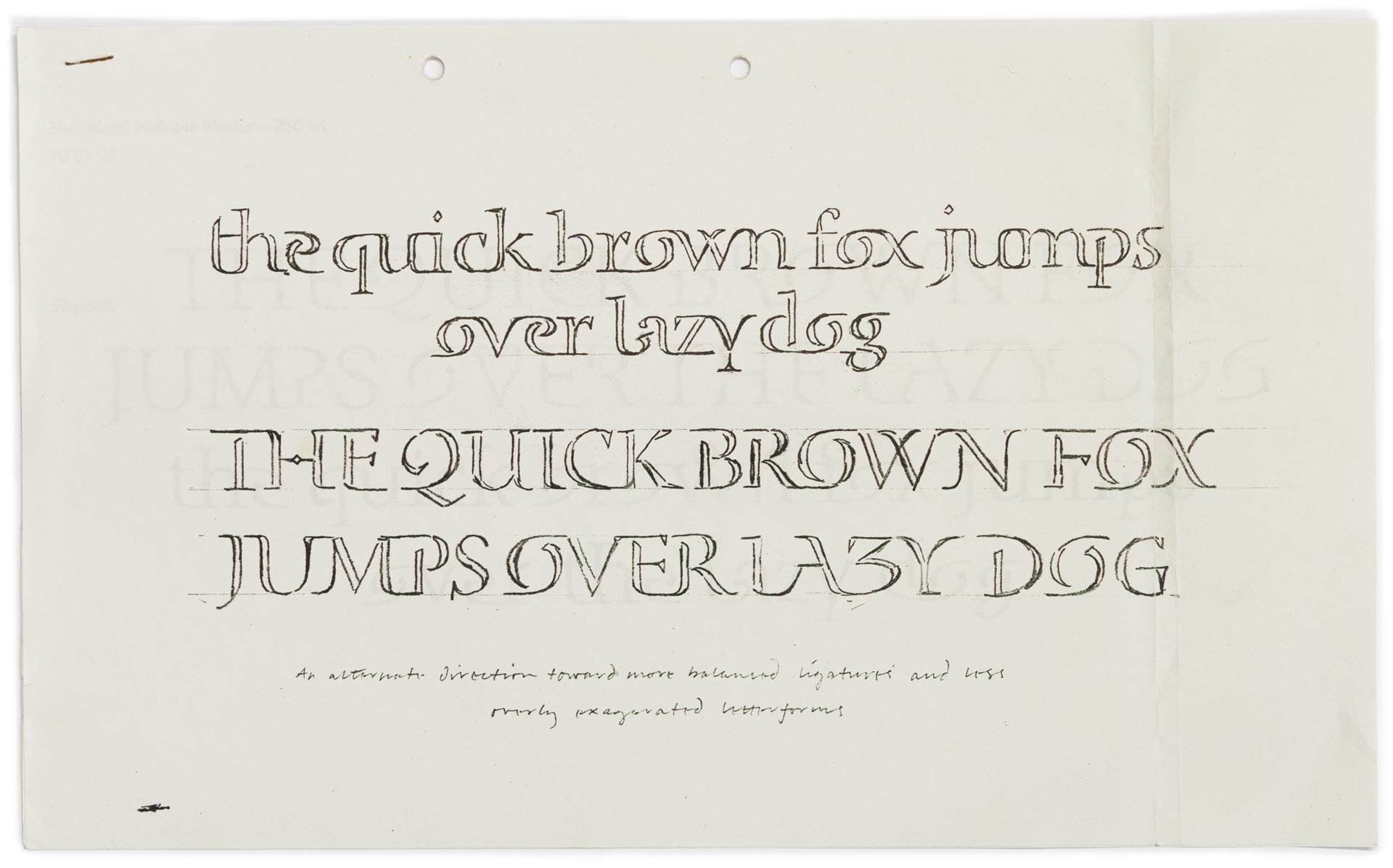 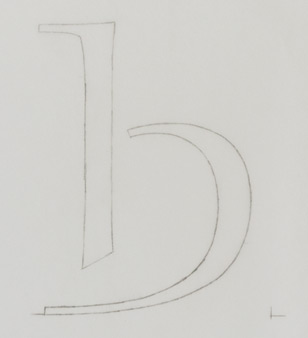 9. Sketch made on tracing

The idea was becoming over complicated. So to make things more complicated I decided to make a Multiple Master typeface from it. This technology was developed by Adobe Systems and allowed the user to create multiple font variations on the fly. The technology didn’t catch on and was eventually dropped for retail fonts. The idea though is fundamental to modern type design and is now having a second renaissance in the wider world as OpenType Variable Fonts.

10. Comments made by Carol Twombly and Robert Slimbach

The design was shown to Adobe and it received a favourable letter back from Carol Twombly, then Manager of Type Design at Adobe. One of the main concerns that Adobe had was over legibility. Admittedly legibility wasn’t originally high up on the list of design objectives. However, it became clear that certain letter combinations required more accessible shapes. Robert Slimbach, also at Adobe, made suggestions to reduce the several overly exaggerated letterforms [fig 8]. His sketches calmed the letters down and allowed the idea to show through the design, which helped remove the unbalanced look. Over the following months and several rounds of development [figs 10, 11], Blue Island came together, was finished, and entered the Adobe Originals collection in 1999.

In the final typeface some letter combinations don’t link. This is part of the balance across the typeface, not everything has to link [fig 12]. Forcing it would be wrong. In some way it’s similar to how we write informally, where we may naturally join some letters of a word and not others.