The design of Pembroke

Knowing this made the design of Pembroke more of a challenge. One that began with a search to find a root style, or origin, of letter that could embody a concept of Britishness in its DNA. It’s possible that certain design traits and details can be associated to specific geographical locations, and at certain times in history. This would offer a starting place for further exploration. However, potentially cutting details from existing models and pasting them onto a new design isn’t a good way to start. 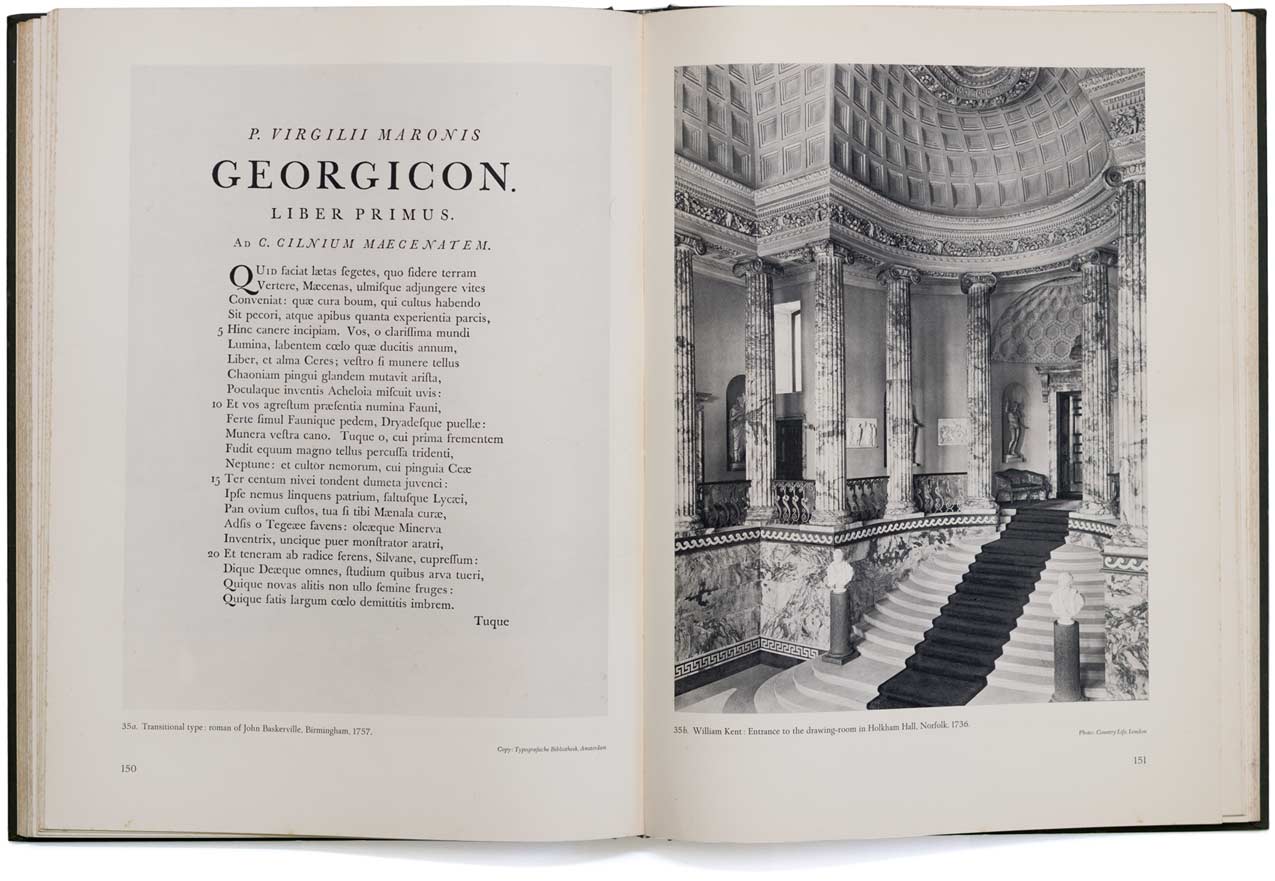 2. Dr Gerard Knuttel’s comparison of typographic style and architecture of the same period 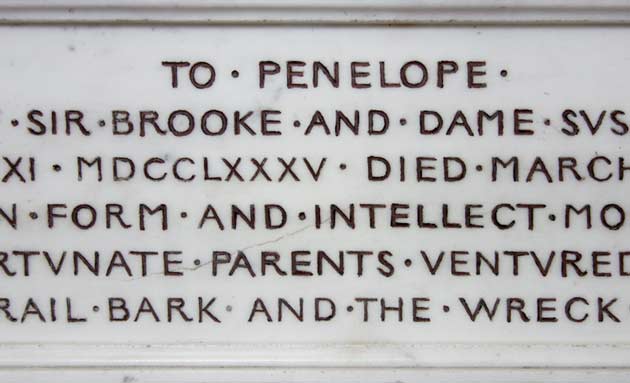 One needs to look beyond a veneer of style and try and identify core approaches to rhythm and proportion. Perhaps bearing in mind the wider developments in architecture, art and literature. For instance Britain didn’t experience Rococo or Art Nouveau to the extent that Europe did. Britain, however, did have Georgian, Regency and the Arts & Crafts [fig 2].

Sans serif letters existed for some time before being made available as printing types. The architect Sir John Soane, for instance, made use of a sans letter in 1789 and Thomas Banks used a sans letter for the inscription on his monument to Penelope Boothby in Ashbourne Church, Derbyshire in 1793 [fig 3].

These early sans serif letters are more even, more square, and appear more geometric. A proportion which is more early 19th century and perhaps more British. A proportion that, to some degree, lost its geometric base as the century progressed. The first commercially available sans serif printing type was shown by William Caslon IV in 1816 [fig 4]. This type was limited though, being available in one size only (about 28 point) and with no lowercase. Unfortunately the type wasn’t successful and eventually removed from sale. The overall impression though, is of a clean, geometric letter. Perhaps this could provide a starting point for a new design — but the type didn’t answer the question of origin that I was looking for. 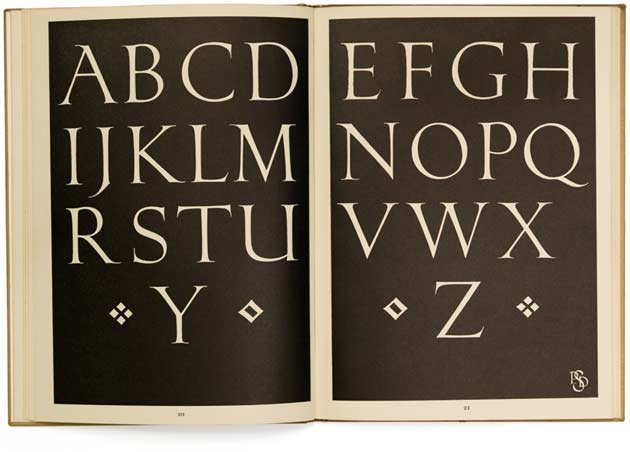 British traditions in lettering follow two significant approaches to proportion. One is perhaps more closely associated with the Georgian to mid-19th century, where capital letters have an overall square proportion [fig 5]. The other approach reflects the idea of the classical letter with its capitals of varied widths. These are the proportions that influenced so much lettering in the early 20th century and are most strongly associated with Britain, especially through the lettering work of Eric Gill and Percy J. Delf Smith  [fig 6].

For the design of Pembroke it was to the earlier tradition that I looked. This period saw an explosion of typographic invention culminating in the rise of the advertising types. It also witnessed the birth of type design and production in Britain. This was started by William Caslon who established his type foundry in 1720 and broke the reliance on importing type from Europe, principally those of Dutch origin. He based his roman on the Dutch letter that was prevalent in England at that time [fig 7]. D. B. Updike comments that Caslon took the Dutch letter style and added “a quality of interest, a variety of design, and a delicacy of modelling . . . and common-sense.” 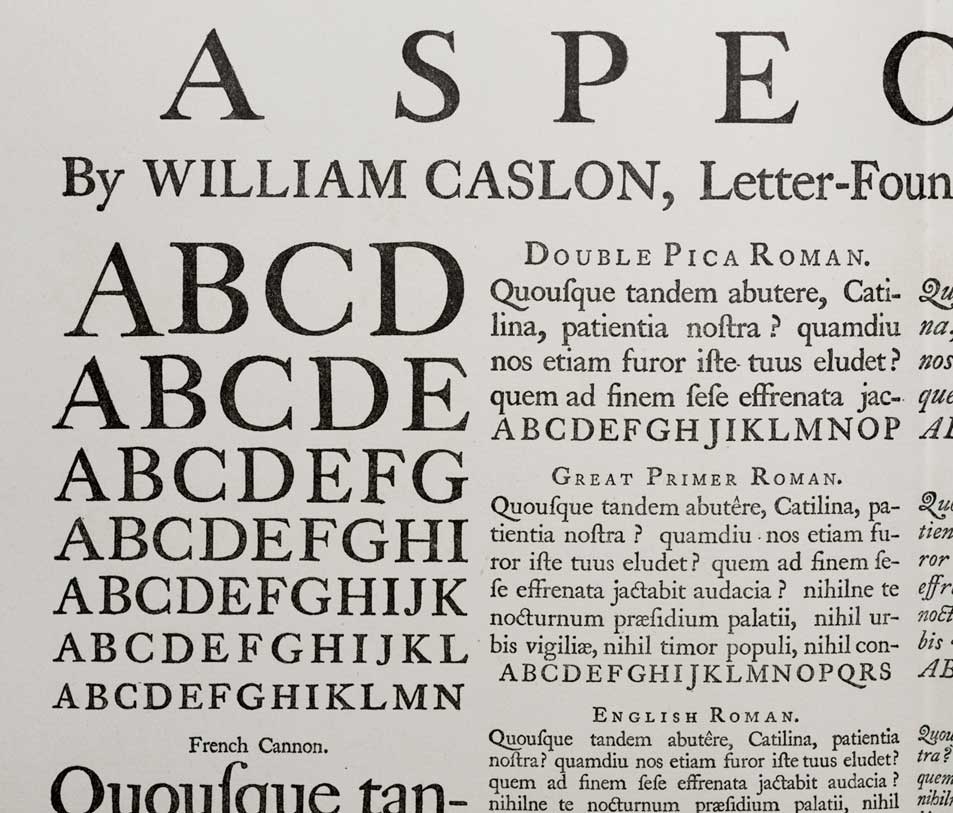 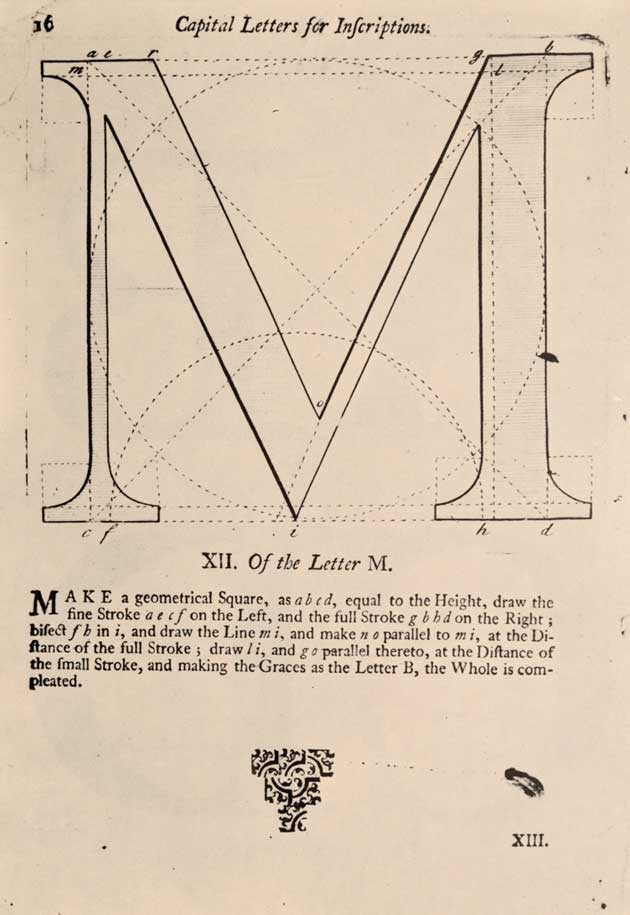 The Caslon letter was hugely popular and has been reinterpreted through successive generations as fashions and technologies have changed. One interesting development was the cutting and casting, by William Caslon II in the 1760s, of large letters for display use. It’s very likely that these shapes were strongly influenced by the geometrical construction suggested by George Bickham the Younger in his book, possibly published in the early 1750s, with the snappy title; A geometrical construction to form the twenty-four letters of the alphabet by means of which the magnitude and proportions of large capital letters for inscriptions, mottoes, sign boards, etc. against buildings of considerable heights, are very exactly and easily determined [fig 8]. However, as the century progressed, the use of Caslon reduced and the type style fell out of favour in the shadow of the new, smarter transitional and modern type styles. 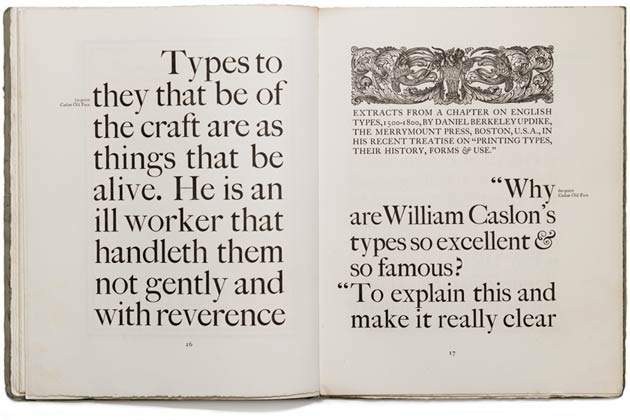 By the mid 19th century the Caslon typeface was rediscovered and revived, later being modernised and re-issued as Caslon Old Face. This new version was first made public in 1896 and seen to great effect in the 1924 specimen printed by George W. Jones for H. W. Caslon & Co [fig 9]. Ltd. The changes have been to such an extent that our understanding of an original version is lost. Yet even through this ‘tidied-up’ version something of the general feel and image of Caslon’s original remains and has provided inspiration for subsequent founders and designers. In Johnston’s Underground type, Justin Howes notes Edward Johnston’s admiration for Caslon Old Face and goes on to suggest that Johnston Sans is “virtually a monoline sanserif version of [it].” 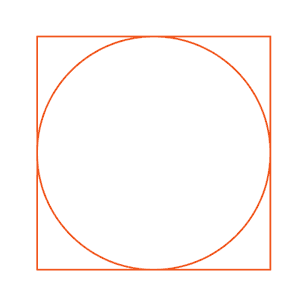 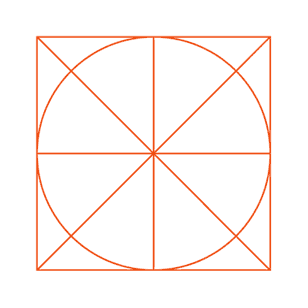 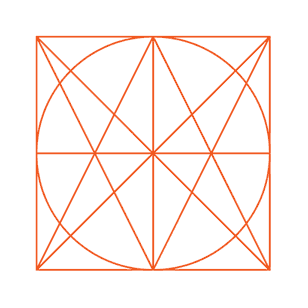 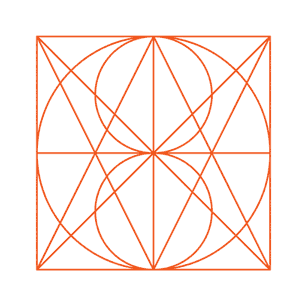 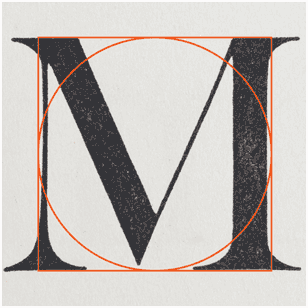 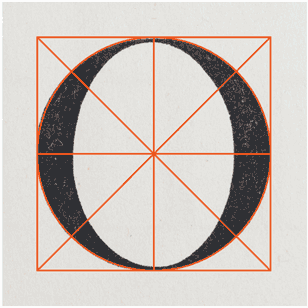 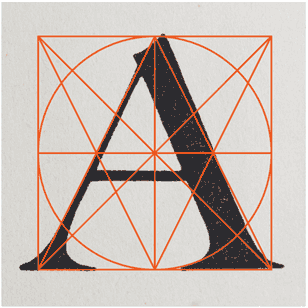 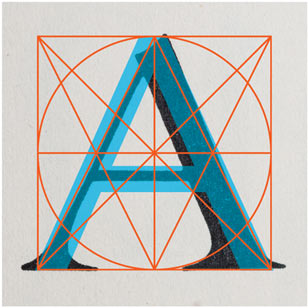 It’s to the sharp, fresh letters of Caslon Old Face that Pembroke looks, though not in as direct a way as Howes suggests. Pembroke is underpinned by an analysis of the geometrical relations between the capial and lowercase of Caslon Old Face. Placing a geometric framework over the capitals shows immediately how ordered they are. Generally they’re square in proportion, the M is a square, the O is a circle bound by the square and the A is a triangle with the width of the square. This order is continued to the lowercase where the round letters conform to a circle, yet the lowercase straight letters are more condensed in feel, offering a lively rhythm when set. Pembroke is simply drawn over these proportions resulting in a fresh geometric inspired sans [fig 10]. 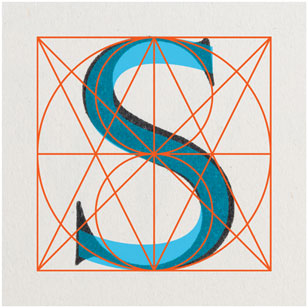 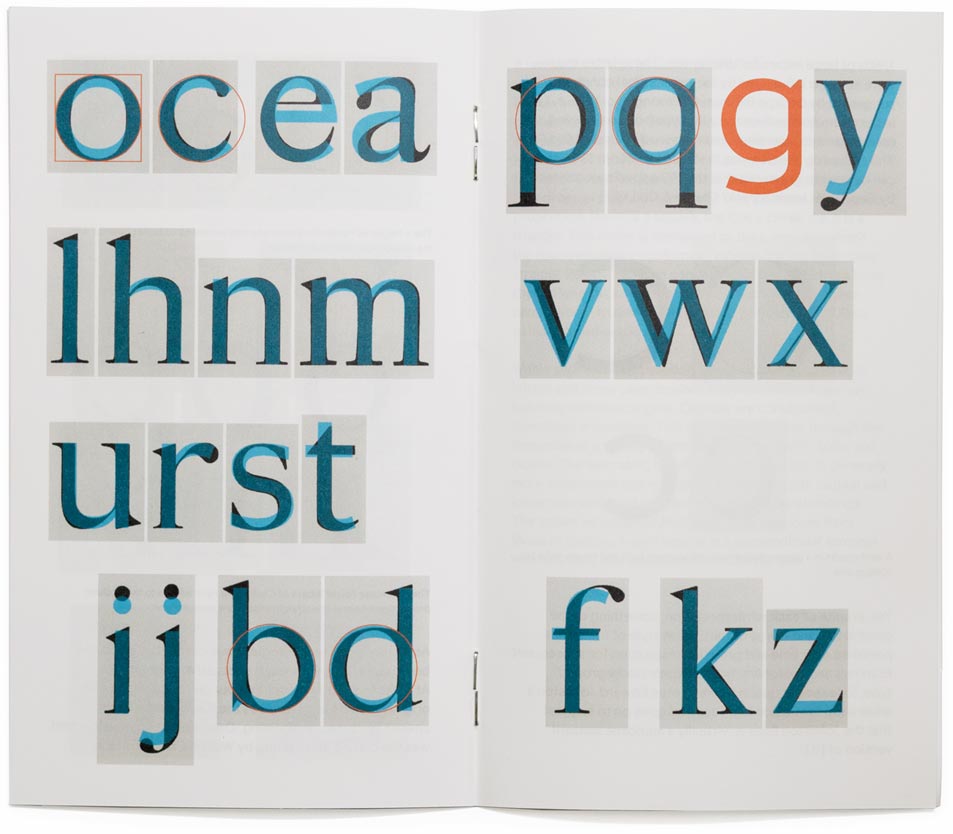 10. Notes on the design of Pembroke, part of the Pembroke specimen, 2014

Terminal detailing of a sans serif is generally methodical and restricted in its approach where capital and lowercase share the same structure. A serif typeface however, is free to explore a wide range of serif details and stroke terminal endings. Historically the capitals were derived from a constructed origin whereas the lowercase were written. Over time they’ve been designed together and as a result, harmonise well. This can clearly be seen in Caslon Old Face through the formation of the various stroke terminals; serifs, balls and tapers. In considering the terminal detailing of Pembroke a simple rule was observed — where a terminal stroke bears a serif, Pembroke’s stroke is perpendicular, and where balls and tapers appear, Pembroke adopts an oblique terminal. 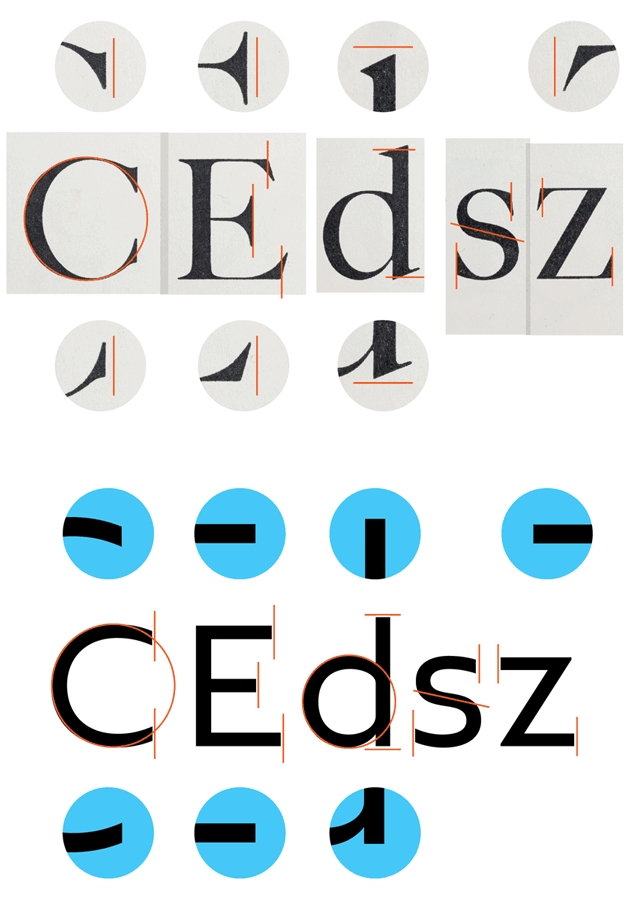 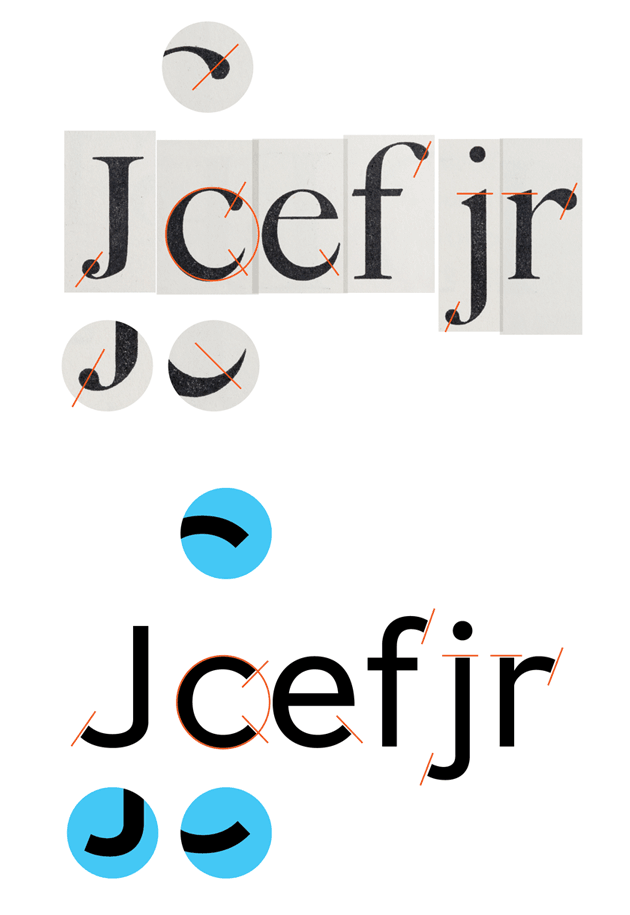 Bartram, Alan. The English lettering tradition from 1700 to the present day, Lund Humphries, 1978

Knuttel, Dr. Gerard. The letter as a work of art, Typefoundry ‘Amsterdam’, 1951

Mosley, James. The nymph and the grot, Friends of the St Bride Printing Library, 1999

—. ‘The early career of William Caslon’, Journal of the Printing Historical Society, number 3, 1967