The design of Brucker

There’s a lot of warmth, passion and energy in things that are raw and immediate.

Formed in Dresden in 1905 the artists’ group Die Brücke is generally seen as the beginnings of the art movement that became known as Expressionism. Their thinking, approach and art are uncompromising, energetic, angry, feverish, fanatical. Lines are broken, rough and eagerly made with colours that jar and rage against one another. All very anti-establishment. Their images scream at the viewer and directly challenge the accepted ideas of what art is. Exciting stuff. [figs 2, 3, 4] 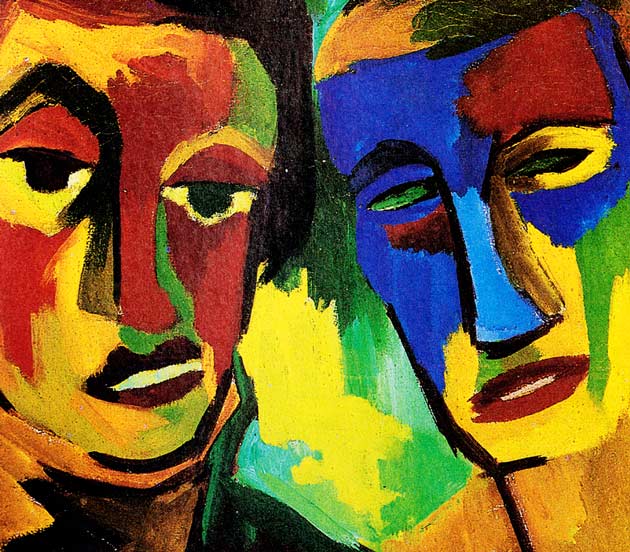 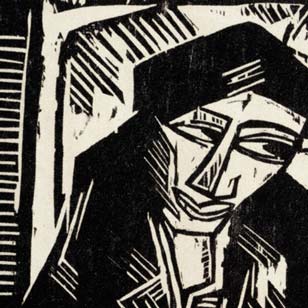 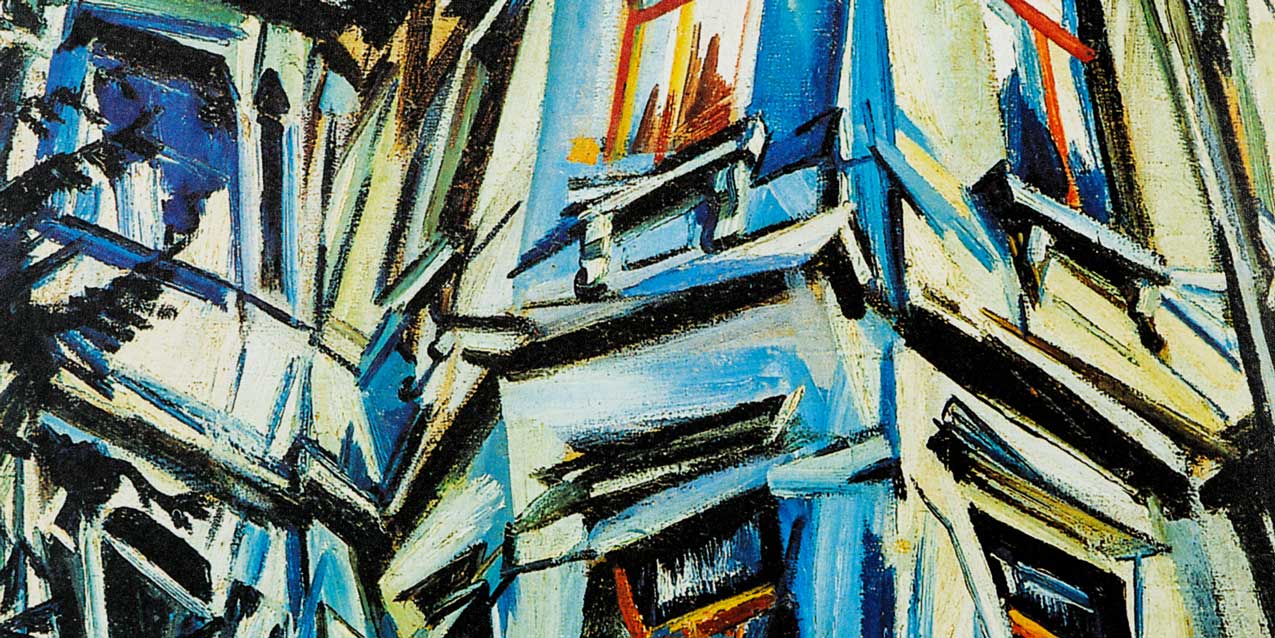 It is easy to look back on this period as being full of romantic and bohemian ideas. However, the world, and living in it, was very different and we need to place everything in context. It also needs to be remembered that the young creative mind experiences a lot of tormented stress in its search for answers. Mixing this anxiety with the fear of lost dreams, and time running away, creates the perfect environment for fresh ideas to thrive.

Not being confined to just fine art, the urge to follow Expressionist ideas can also be seen in the wider arts including film, drama, literature and stage design. This zeitgeist travelled beyond Dresden to influence artists across Germany and the neighbouring Austro-Hungarian Empire. It is this emotively charged period that directly influenced the design of Brucker.

The purity and raw essence of a piece of work has always been of interest. Be this the designed simplicity of a Shaker product or the honesty of an Alfred Wallis painting. Also, in the natural world, the innate harmony of the ‘picturesque’ has fuelled a fascination of how to capture the energy and emotion experienced when something is ‘just right’. Many of the ideas that led to the design of Brucker originated as a reaction to the acceptable and smooth types currently being generated. Have we lost the ability to tolerate a letter that has not been through the calculated and cleansing algorithms of a computer? And why, so often, do we take refuge in the handmade? Is it to satisfy our desires to have direct contact with something organic and natural, to experience the myriad of tiny and unique inflections that add life. 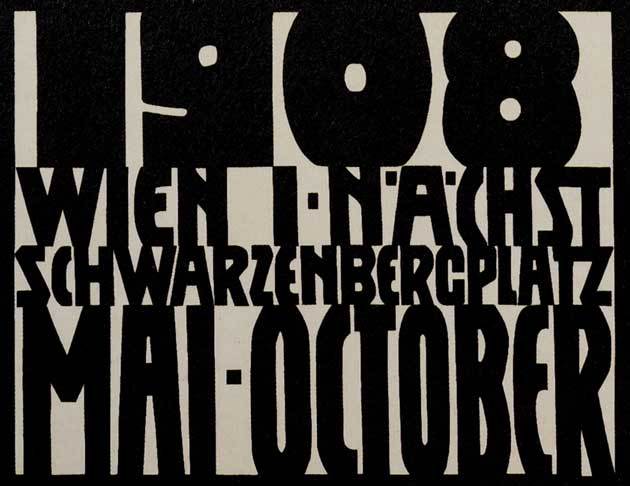 5. Lettering from an art show poster by Rudolf Kalvah, 1908 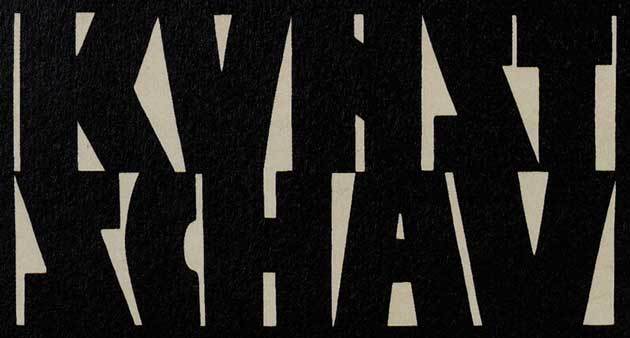 6. Lettering from an art show poster by Rudolf Kalvah, 1908

7. Lettering from an art show poster by Oskar Kokoschka, 1908

8. Lettering from an art show poster by Oskar Kokoschka, 1909

Several posters were made to publicise the various art shows in the early years of the 20th century. The letter shapes seen on these are strong, black, immediate and crude. They appear to be directly cut and jammed together to make dense evocative blocks. [figs 5–8] The same raw shapes are later tamed by Rudolf Koch in his Neuland typeface of 1923 – itself directly and expressively cut by Koch for the Klingspor foundry. To some degree these shapes (and their flavour) are further formalised by Berthold Wolpe in his Albertus typeface for Monotype, 1932. [figs 9, 10, 11] 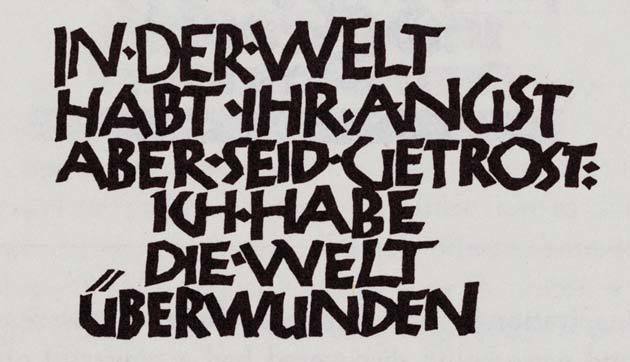 10. Neuland designed and cut by Rudolf koch, issued by Klingspor, 1923

11. Albertus designed by Berthold Wolpe for Monotype between 1930–40 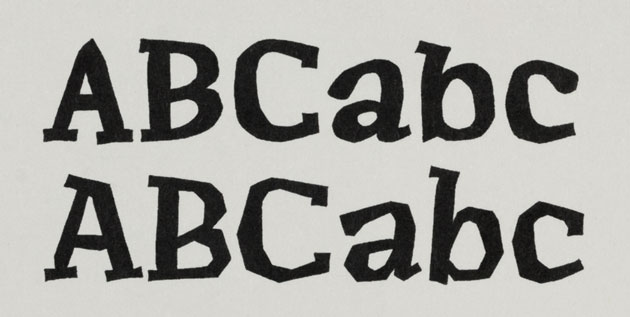 12. Differences between 1912 and 1913 typeface designs by Preissig show the removal of curved strokes

In 1912 the Czech designer, Vojtěch Preissig was creating idiosyncratic expressionistic types for use in his graphic publications. The culmination of his experiments was Preissig Antiqua, which was subsequently cast by the State Printing House in Prague, 1925. [figs 12, 13, 14] 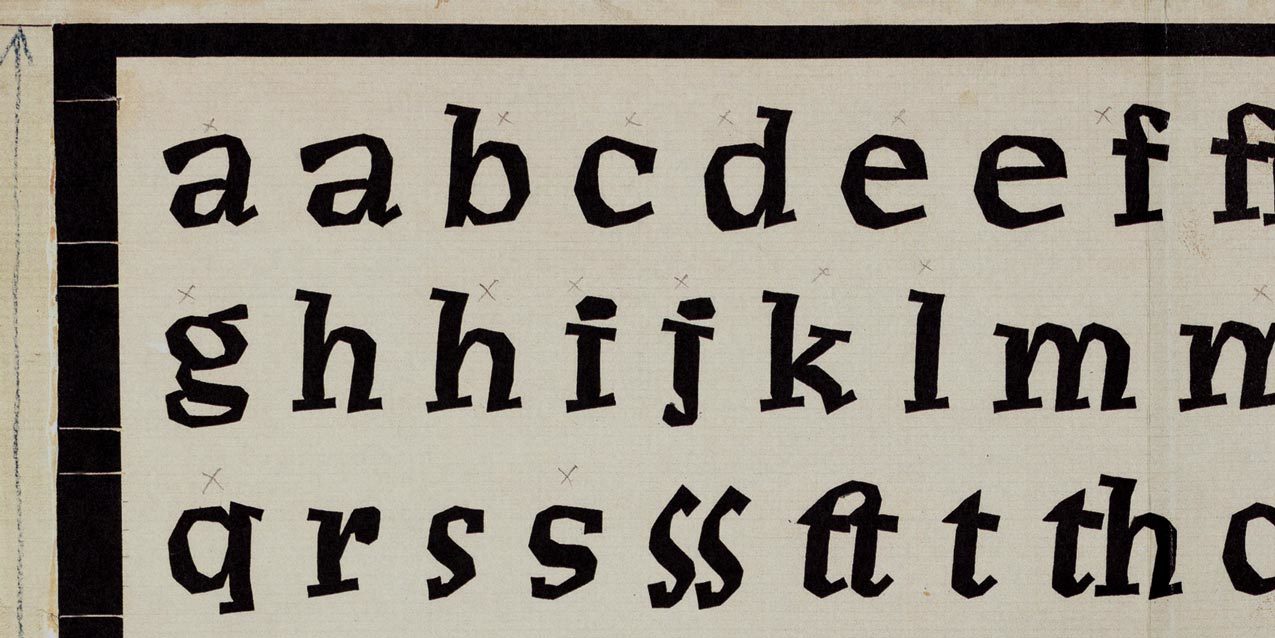 13. Typeface designed by Vojtěch Preissig in 1913 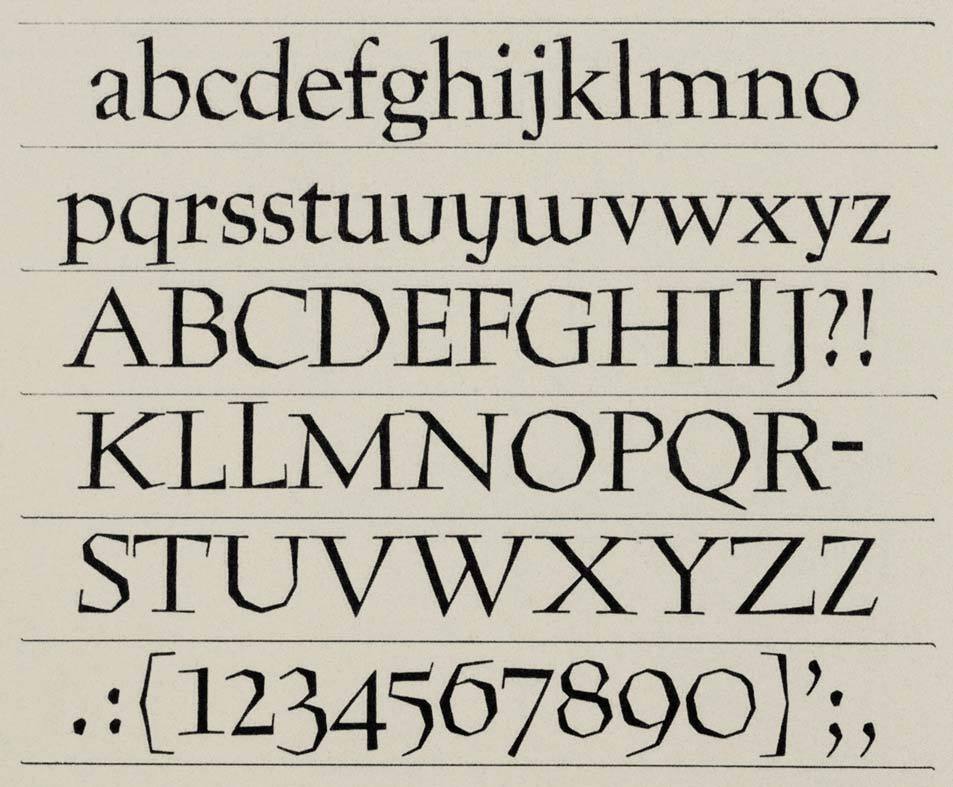 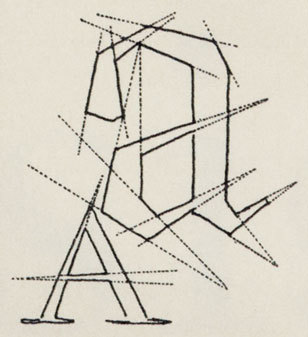 15. The principle of wedges that underpin the construction of Preissig Antiqua

The Antiqua design is built from a series of wedges that describe each letter shape. It’s a constructed type with no curves that imparts an inherent restlessness and edgy vitality. Of this typeface Preissig said; “A font out of the ordinary, neither dull nor erratic, nor even a mere reflection or reproduction of the classics; my intention with this font was to protest against the mechanical roundness and polish of ordinary fonts by making an attempt at impeccable proportions (it is an exceedingly difficult task).” [figs 14, 15] 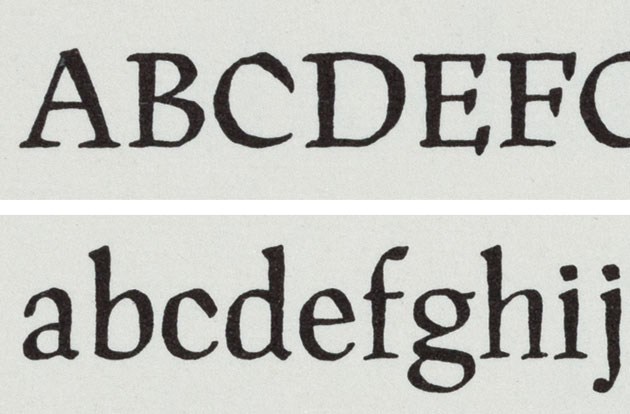 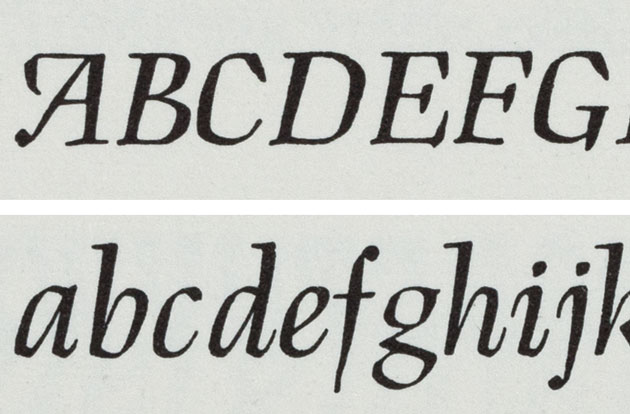 In a similar way that Wolpe is mentioned in continuation of Koch; it’s worth looking at Oldřich Menhart in continuation of Preissig. Menhart poured his own unique calligraphic style into his typefaces. Working later than Preissig, Menhart’s types are full of individual expression, with Manuscript being perhaps the most captivating. [fig 16]

I often find that once you start looking, interesting things begin to crop up all around. The bold, raw letters found on a silver penny, minted in London during the reign of Edward III (1327-77), maybe weathered by history and a product of their time and manufacture, but they speak a similar visual language to that of the later expressionistic letters. [fig 17] 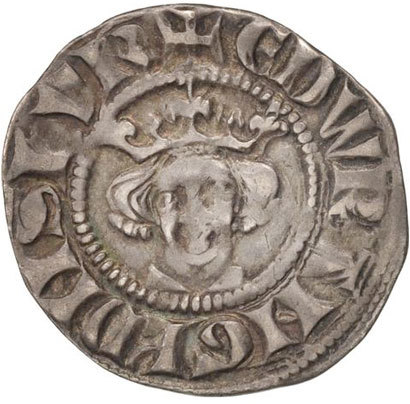 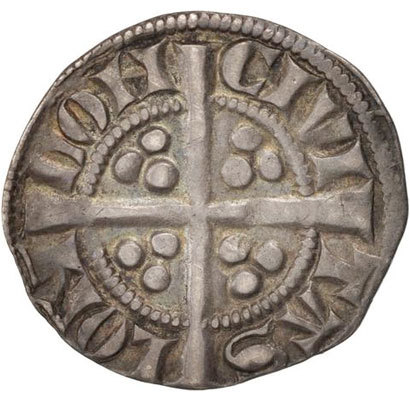 Fired with the impressions left by many of these energetic and uncompromising approaches to letter shapes; early sketches for Brucker show the desire to maintain a varied and active line. Initial development moved from the sketchbook to sheets of A4 paper in order to work more quickly. Most of the core design was produced across a few days during the third week of October 2018, with refinement made through November. Many letters were more formally finalised in trace drawings. This approach allowed the sketches to retain their natural hand drawn quality and not to expose them too early on to the harshness of an exacting computer outline. [figs 18–21]

20. The italic was conceived to have a strong rhythm 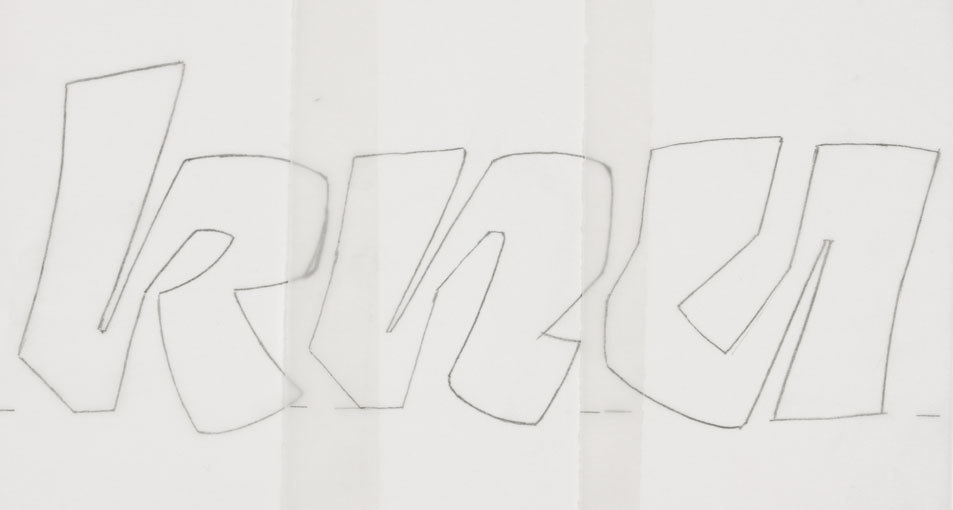 21. Trace drawings for Brucker Black Italic show deep cuts incorporated to highlight the cursive structure. The fit between letters also shows how the strokes have been shaped

By freely moving the trace drawings around and viewing them from different angles; the letter shapes were accessed and changes to their structure and outline made. This resulted in a set of ‘construction rules’ that could hold the type visually together. As a last round of pre-digital development, ink drawings were produced of several letters. Not only to enjoy the shapes and see the effect of a raw informal line, but also to focus on the feeling which needed to be retained when digitising. [figs 1, 22]

22. Inked drawings were made to obtain a better idea of the solid letter shapes. Seen through a reducing lens; the rough and varied strokes gave a good indication of the desired final effect

There are a few important details to the design of Brucker. Like elements are drawn individually; yet appear the same. Straight lines are rarely used across the typeface family, and stems and curves are not mathematically repeated. Stroke terminal endings are arbitrary, though collectively they harmonise. [fig 23] The usual approach of a consistent horizontal alignment is knocked a little by letter shapes that bounce up and down along the line. [figs 1, 21, 22]

Both bounding edges of a letter’s stroke don’t necessarily follow the same course. This can easily be seen in the counter of an italic lowercase o, the outside edge comprises of six lines, but the interior edge (forming the letter’s counter) has three. Bends in a stroke are soft, allowing the curve to be ‘interrupted’ instead of broken. [fig 26] Sharp corners do appear but are limited to stroke terminals. [fig 24] 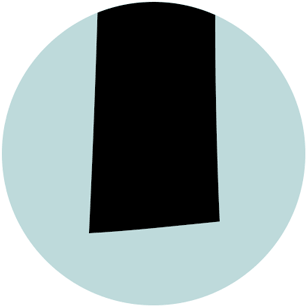 23. All stems are individually drawn with arbitrary stroke endings 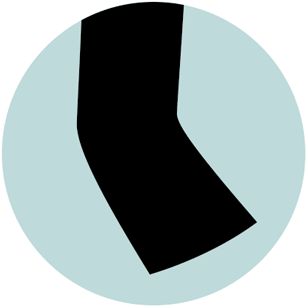 24. There are no sharp curves or bends along a stroke, allowing the curve to be ‘interrupted' rather than broken 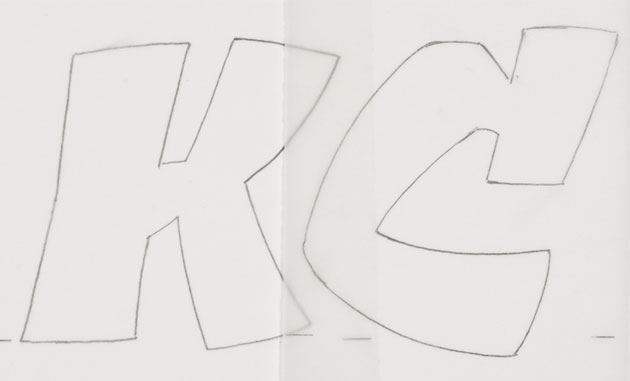 25. The shape of the capital C is drawn to fit the negative space of the K 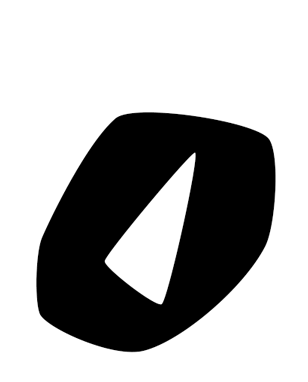 26. Both edges of a stroke don’t necessarily follow the same course. In the lowercase o, six lines make up the outside edge, but only three describe its inside counter

27. The cut in the right leg of the n defines its exit stroke feature without increasing the overall character width. This is repeated in the w for its entry stroke. Lines are pushed and pulled to maintain an even rhythm

When designing the italic, shapes were fitted together to make interesting negative spaces. Strokes were allowed to fill space without harming the definition and intrinsic character of each letter. Stems are cut in to to better define the notion of italic. As with the roman, the approach taken with the design of the italic, was to find each letter’s skeleton and then re-wrap its outlines to change its silhouette. [figs 21, 24, 27]

Perkins, Tom. The art of letter carving in stone, Crowood, 2007