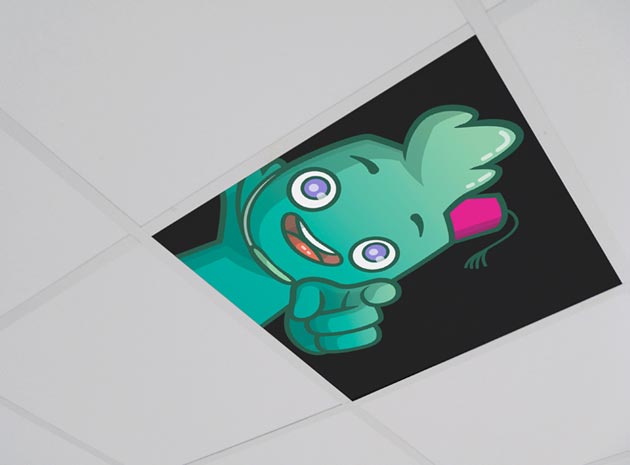 The invention of a new script is quite rare. One for an alien race is perhaps even more so.

Design agency Hemisphere approached us to work with them on an extensive branding project for the Royal Manchester Children’s Hospital. Their idea to rework and improve the children’s experience of their time in hospital involved an alien race called the Queezies. We were asked to give the Queezies the ability to communicate through the written word. 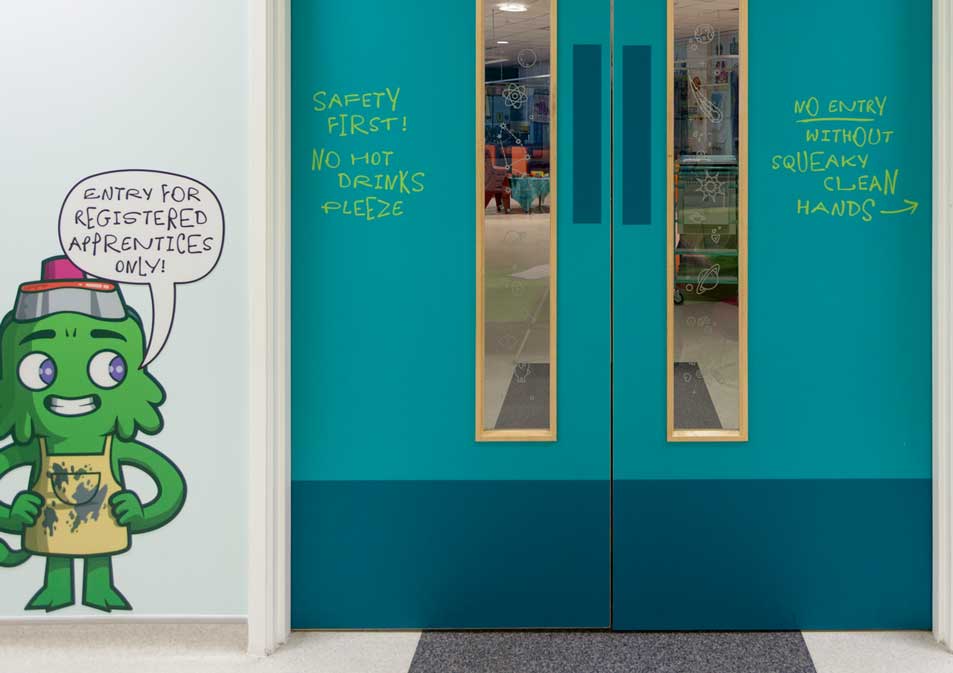 3. The Queezies make their presence known around the hospital

As the Queezies infiltrate the hospital and children’s wards they speak and scribble in English across the walls [fig 3]. Creating a type style to do this required an approach akin to Method Acting. Illustrator Nick Hamilton visualised the Queezies and continued to create all the illustrations. As the Queezies developed it became easier to understand how they might make marks and how these marks might appear.

Considering the Queezies are an alien race it’s logical that they wouldn’t construct written characters the way we do. So to discover how they might interpret and write an English letter, we had to look closely at their own writing system. By understanding how they write their own language, it would suggest how they could write our letters. The problem was that their own language, Queezoid, didn’t exist. So the first part of our work involved creating their script.

Reviewing different writing systems from around the world offered a rich source of inspiration, and through studying these, an idea of what Queezoid could look like began to take shape. Syllabary scripts such as Pollard appear machine-like and perhaps alien, also the repeat patterning of a syllabic script does impart a mathematical and engineered feel, which was worth exploring [fig 4]. From this developed the idea that geometry is core to the Queezie cultural history, as well as the development of their script. 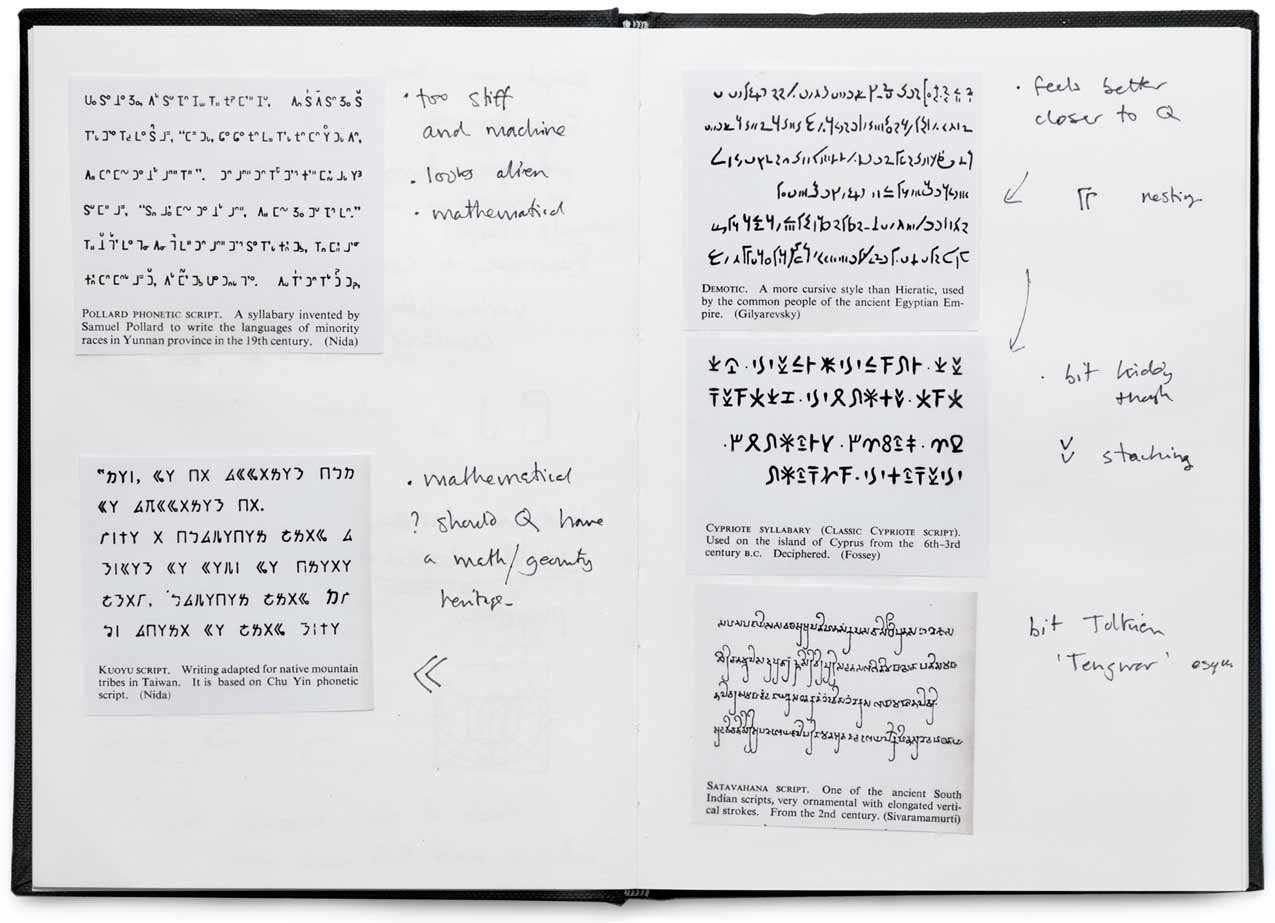 4. A variety of scripts were looked at including Pollard, Kuoyu, Demotic, Cypriote and Satavahana 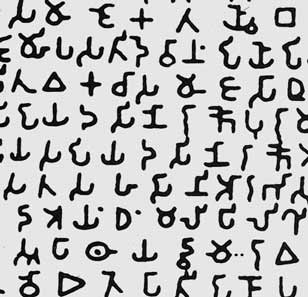 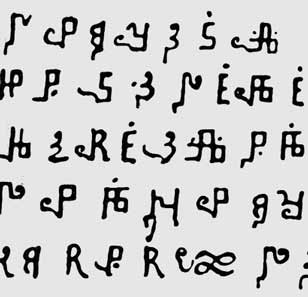 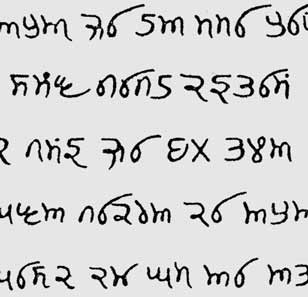 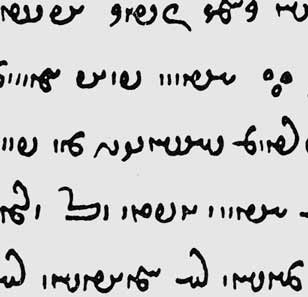 The Demotic and Cypriote scripts have a softer appearance to that of a syllabic and also possess a visual nesting or stacking idea [fig 4]. The Brahmi and Balti scripts are more block-like with a symbolic, emblematic effect. However, many of these scripts have very little or no vertical movement to knit a text block together [figs 5, 6]. The Lahnda and Pahlavik scripts both posses elements that could be used in Queezoid, especially the use of ascenders to add more rhythm and energy [figs 7,8]. 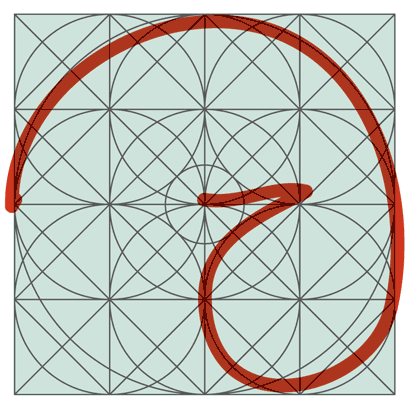 9. The ancient skeletal structure of Queezoid a 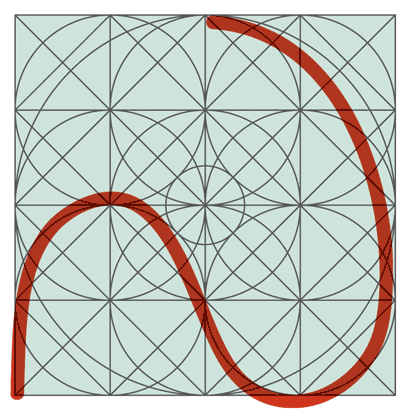 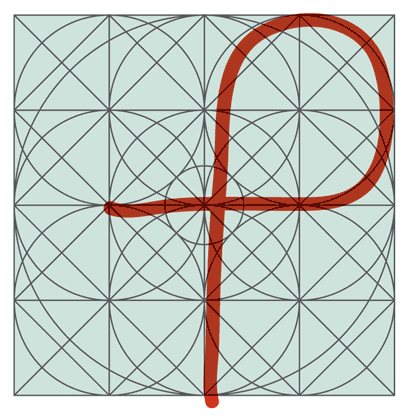 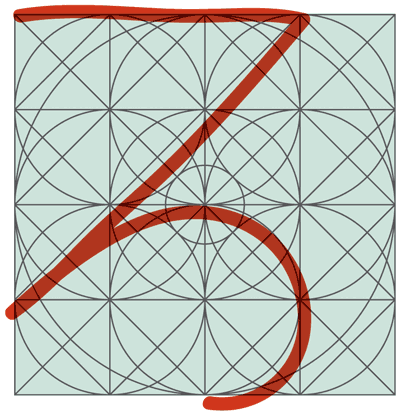 13. Letters adjusted over a common middle section (highlighted). The dot shows the start of each letter with an arrow indicating direction

The letter shapes were drawn over a geometric grid [figs 9—12]. These formed the base of their script — a single case system read left to right. Originally the 26 shapes all aligned, but it’s proposed that over many millennia they became adjusted around a common middle section. The result is that some letters are aligned from middle to top, some from middle to bottom, and some are full height across all three sections [fig 13]. Our concept of a baseline can be applied between the middle and bottom sections. Orientation of the script was kept left to right for ease of use on computer software.

14. Early development saw the alignment of the letters along a centre line 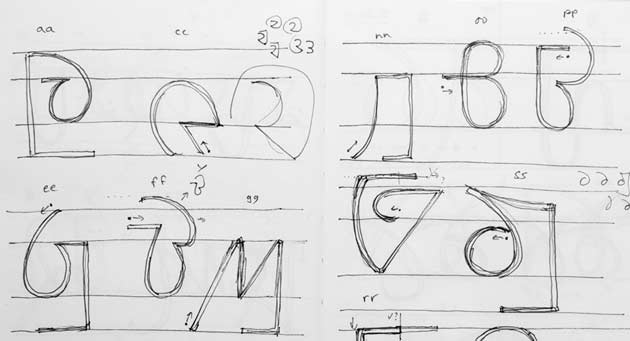 Texture is incorporated across the setting through the use of a couple of grammatical features. One applies to the occurrence of double letters which are marked in text. Several common double letter pairs have developed as individual letter shapes, such as aa and oo. Less common pairings change their second letter to a high or low mark which denotes the repeat [figs 15, 16]. 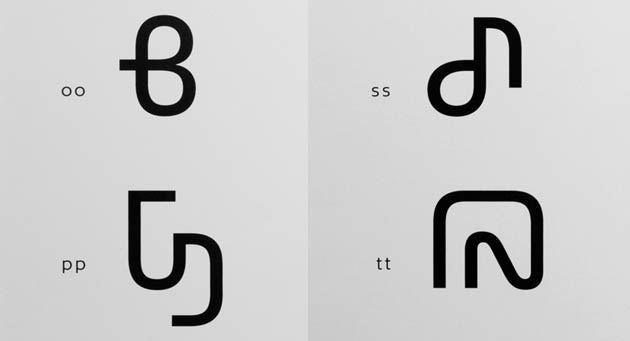 16. Some of the double letter glyphs if the sans serif

17. Tone marks incorporated around the second vowel in a mixed vowel combination

Another grammatical feature is the use of a tone mark which appears above or below the second vowel in a mixed vowel combination, such as ae or iu [figs 17, 18].

18. The word ‘mission’ set in Queezoid Hand shows the double letter glyph for ss and the tone mark under the o in the io combination

Two versions of Queezoid were developed; a written style called Queezoid Hand, and a more formal typographic one, called Queezoid Sans [figs 19,20]. Both possess four ligatures; ch, et, fa, sh. Though Queezoid Hand also benefits from the natural joining that occurs through writing, which results in an additional 48 ligatures. 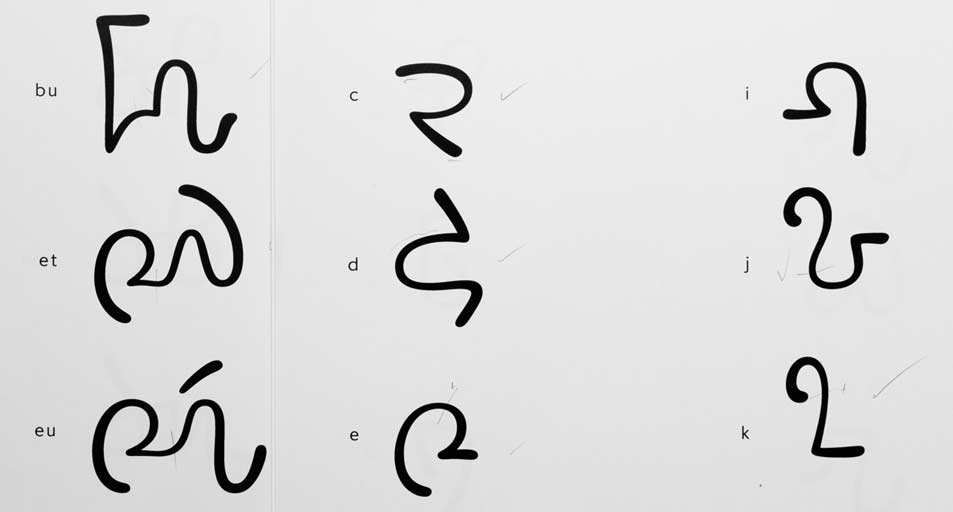 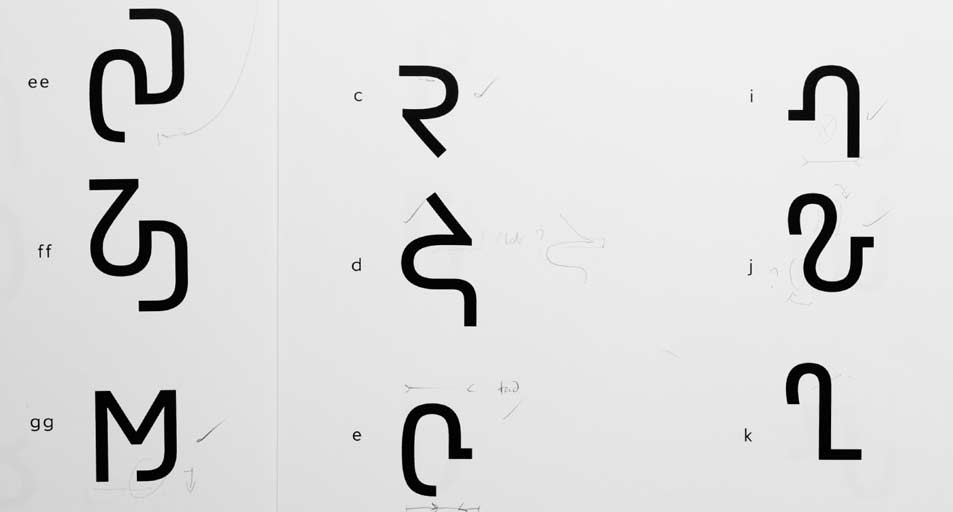 21.  Queezoid Earth includes 5 different versions of each character, this keeps the script alive as the Queezies struggle to scribble a new language

The development of Queezoid Hand, informed the design of the English letter shapes that the Queezies scribble on the hospital walls [figs 22, 23]. One thing we did know was that the end result needed to look chaotic, naïve, and childlike. They try their best to fit their shapes to ours, but some letters appear awkward. The alignment of their own script means that the English letters are generally scribbled along a centre line with shapes that vary in width and height. To convey this the Queezoid Earth type has five versions of each glyph and is programmed to cycle through these as the font is used [fig 21]. 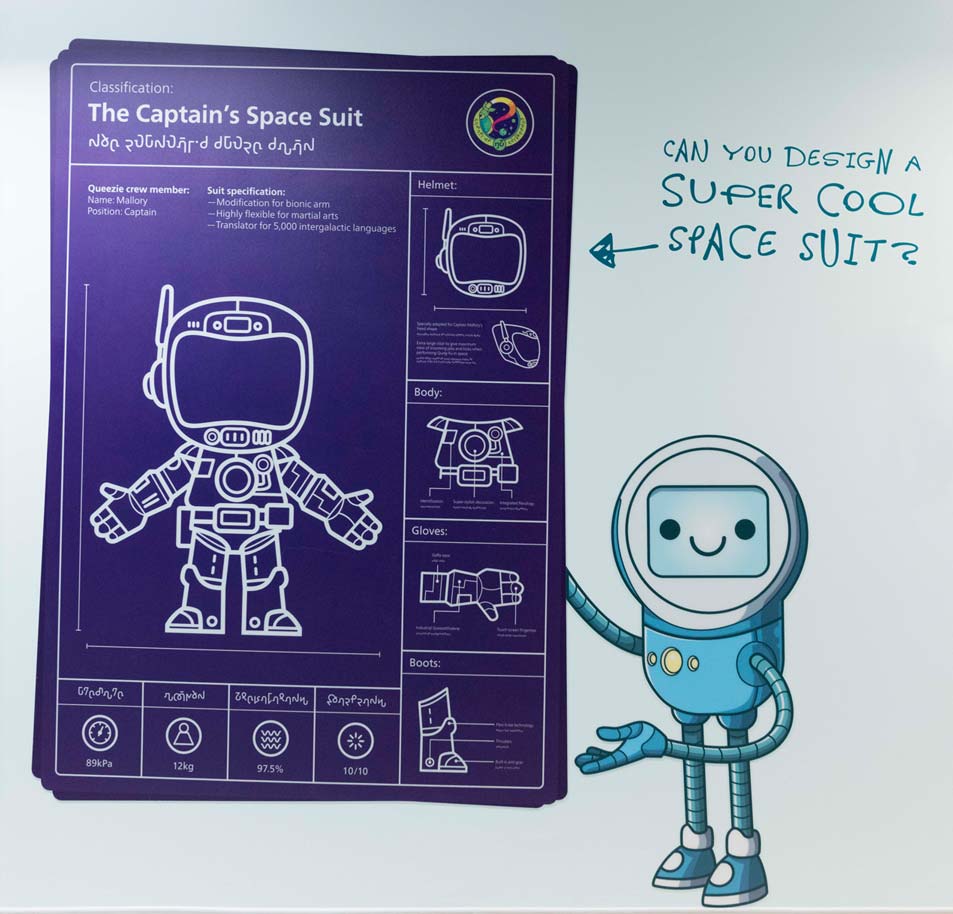 22. Queezoid sans shown on a data panel with Queezoid Earth scribbled on the wall 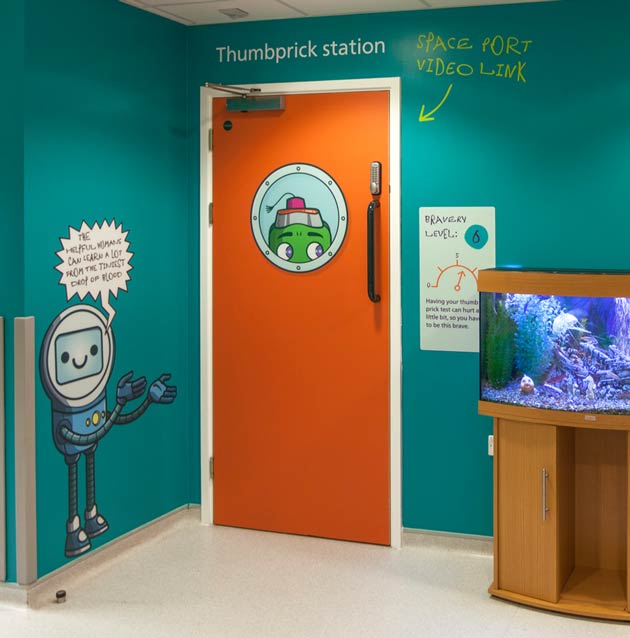 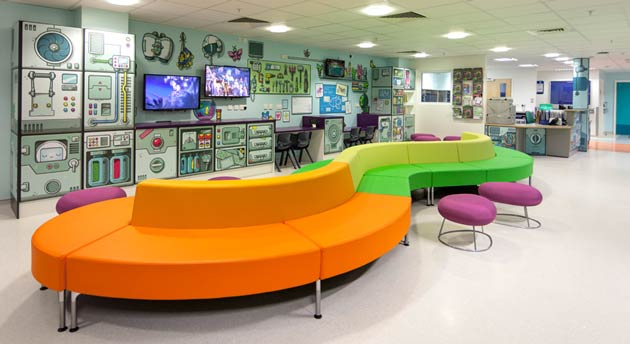 24. The waiting area in the ward 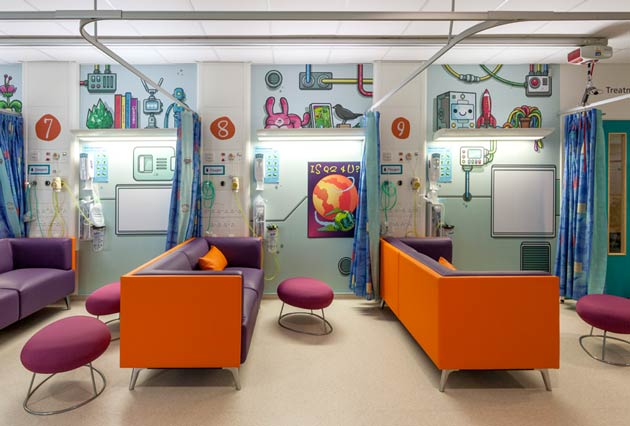 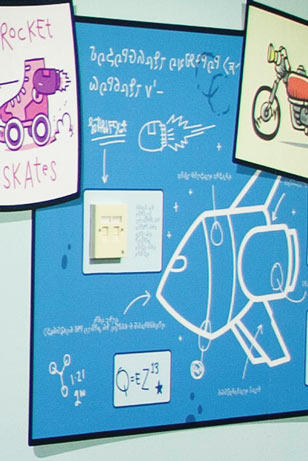 26. Queezoid is incorporated throughout the illustrations 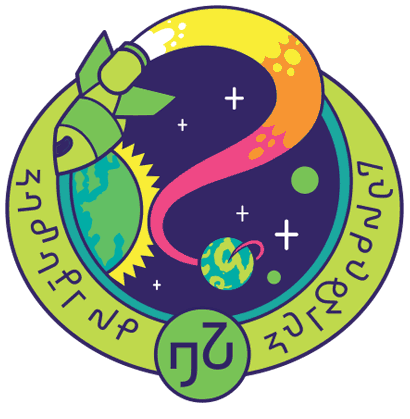 We produced a small booklet that details the history and development of Queezoid. Read The Queezoid script PDF to find out more about their language. 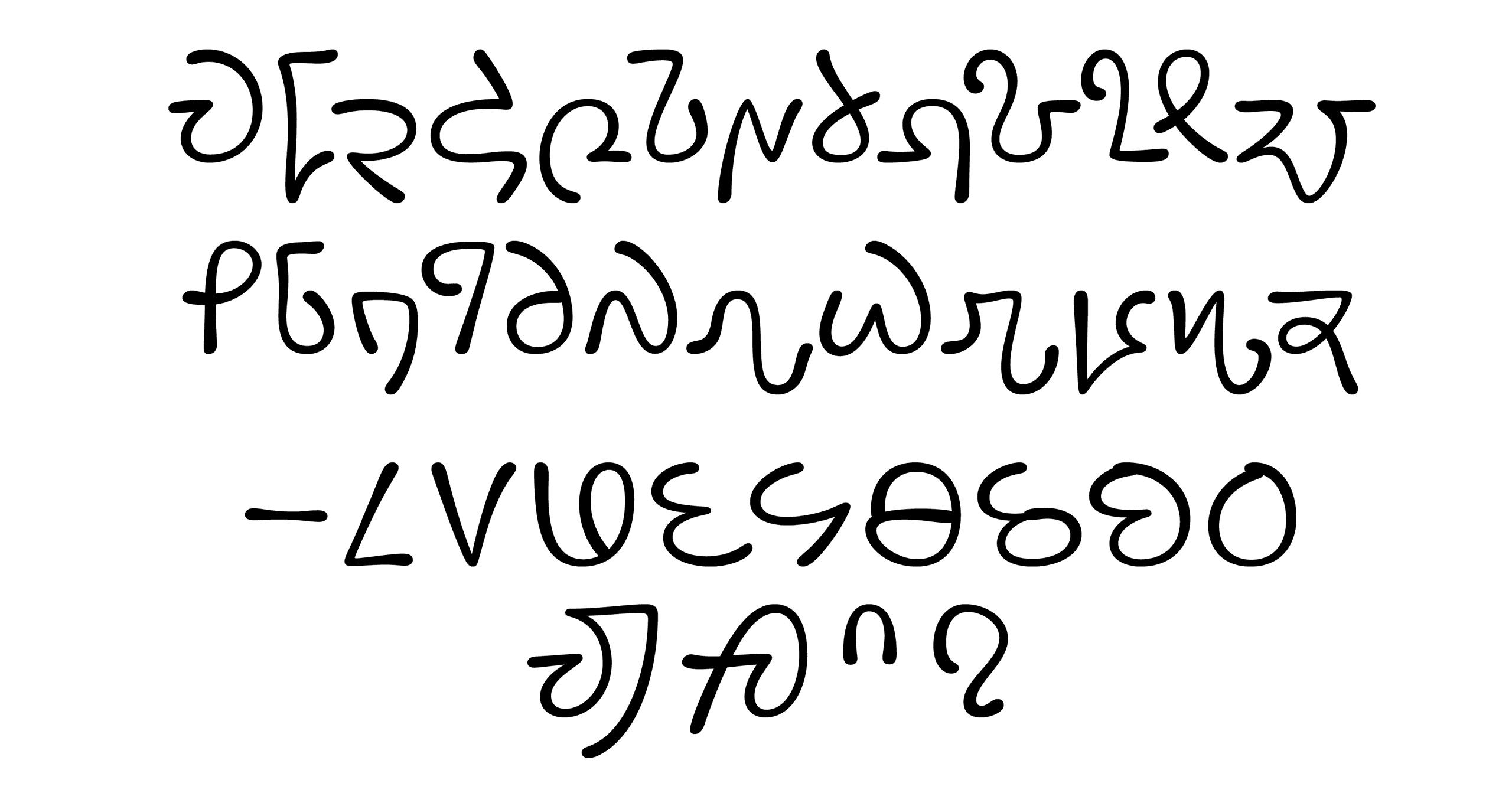 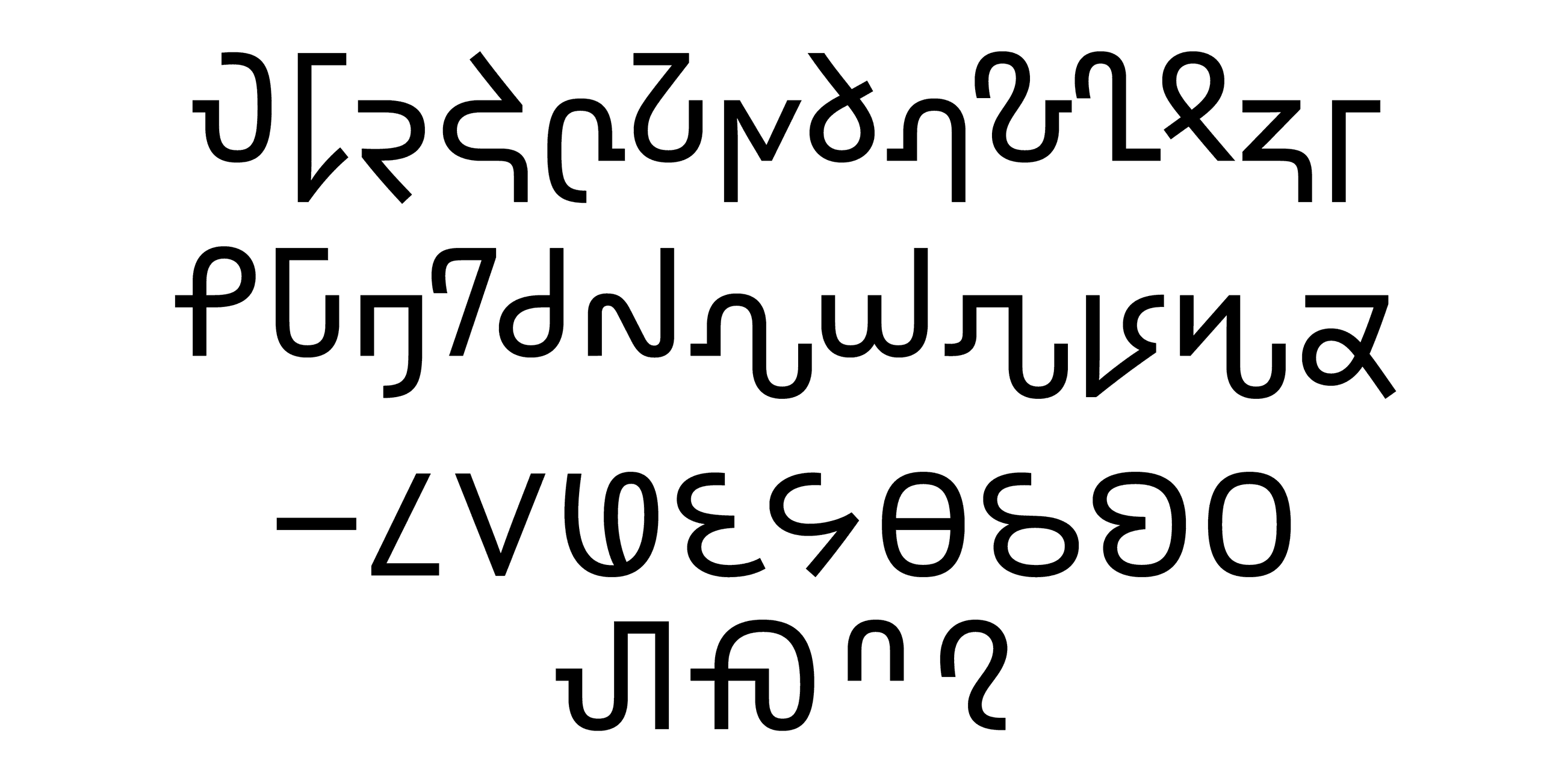 There are 3 fonts in total