The desire to make a Transitional typeface with an unbracketed serif lies at the heart of Hawkland.

Between 1694 to 1702 the French type engraver, Philippe Grandjean cut a new type for the Imprimerie Royale.The letters he produced were given the name romain du roi and were based on models originally drawn using ruler and compass by members of the Academy of Sciences [fig 2]. This rationalisation removed the calligraphic structure that lies at the heart of the Old Face letter. The result shows a more vertical axis in the round letters and the shaping of the serifs have become both flatter and sharper – the general appearance shows the beginnings of what would eventually become the Modern letter [fig 3]. Ahead of its time, the romain du roi was a product of scientific enquiry resulting from a process of measurement and construction along mechanical lines; a child of the Enlightenment. 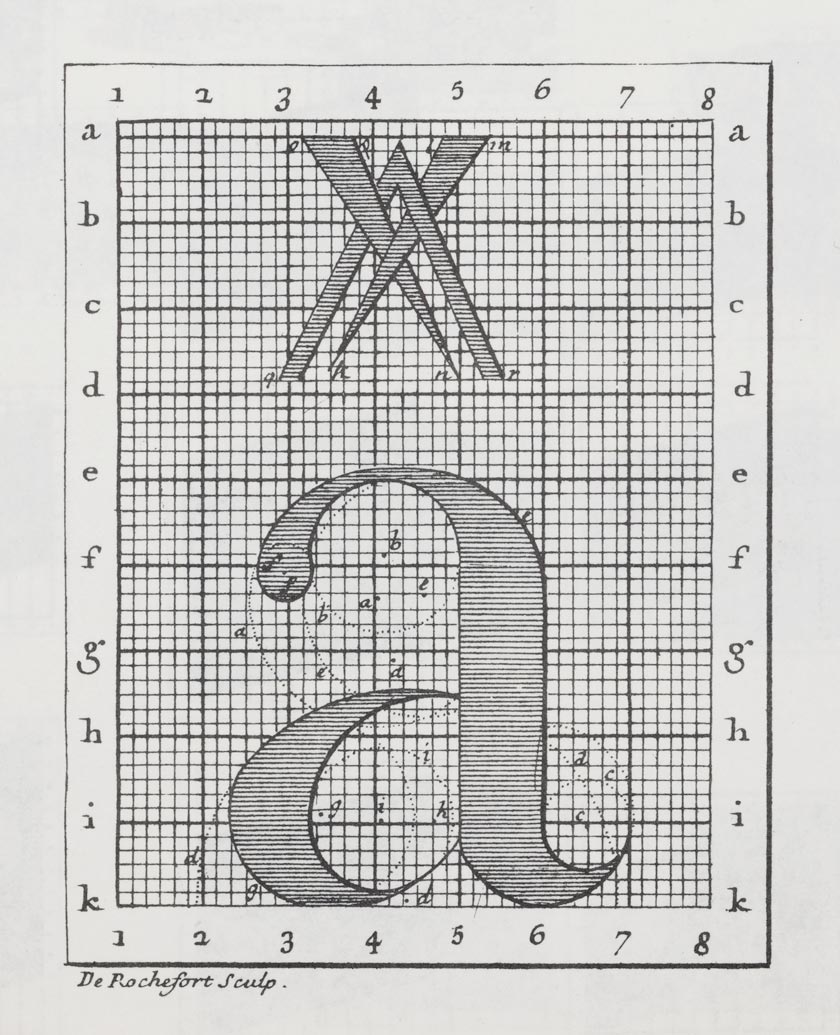 2. Detail from plate XXVI produced by the Academy of Sciences and used as a base for the romain du roi typeface 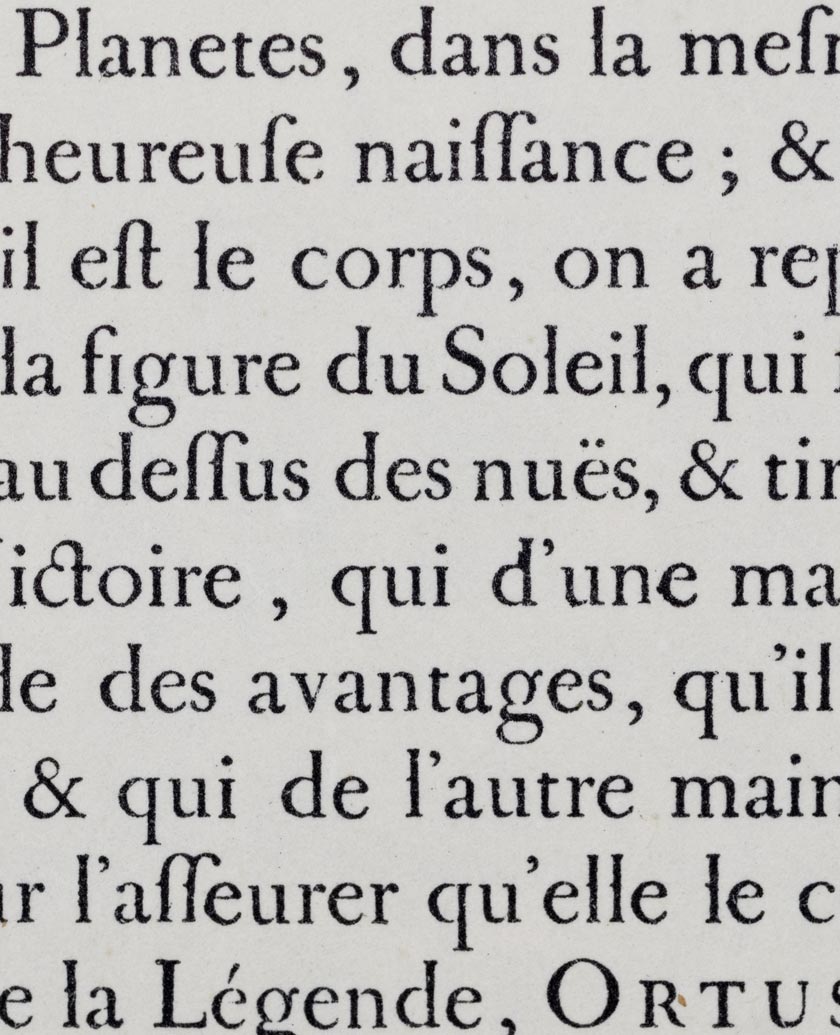 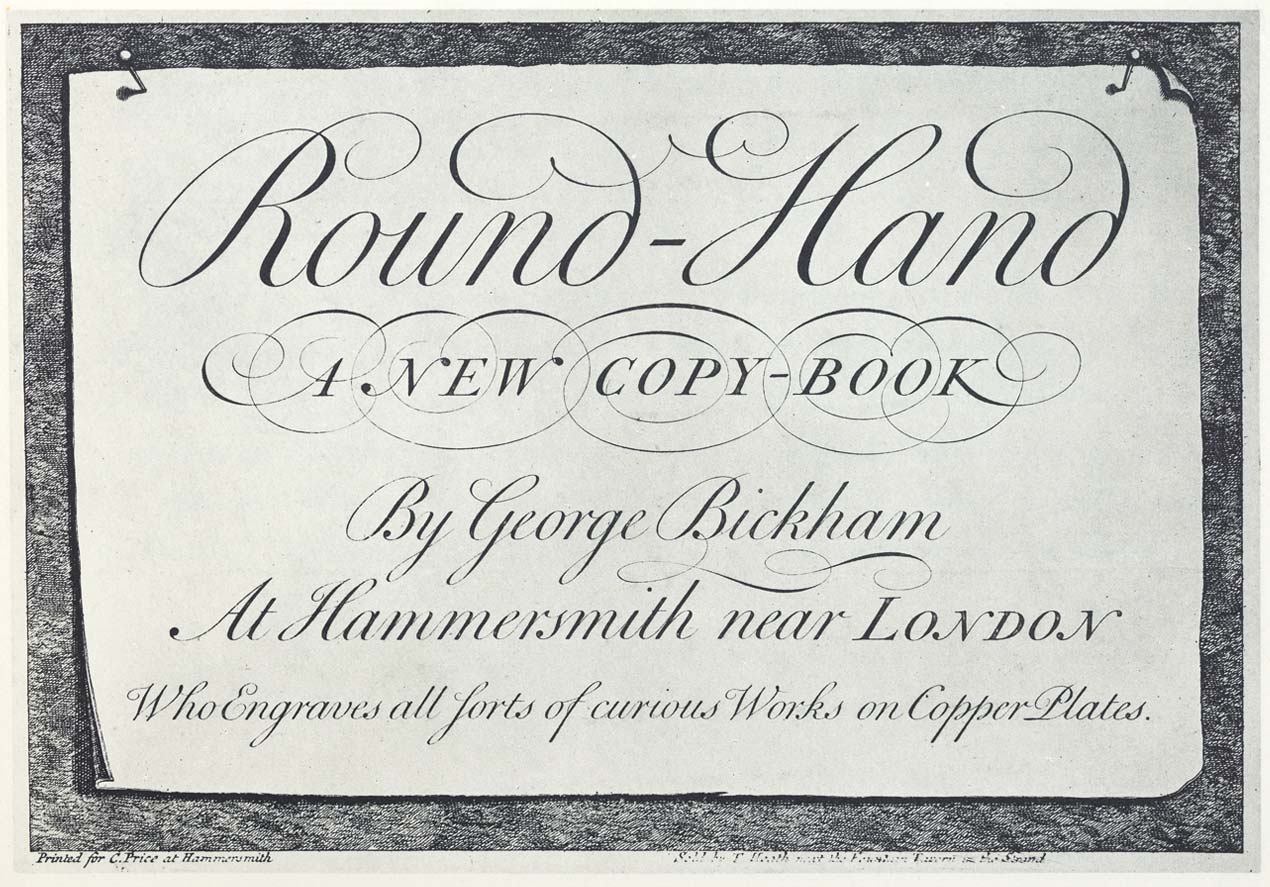 The level of finesse achieved in the plates for the romain du roi was also appearing in the work and copy-books of the writing-masters. A.F. Johnson points out that by 1700 ‘the professional calligrapher, whose work was reproduced on copper-engraved plates, had begun to hold the pen at right angles to the paper, to produce vertical shading, and to reduce their thin strokes to hair-lines’. With regards to an italic, this results in a letter that has a more regulated and even rhythm [fig 4]. This new style, however, didn’t pass to the printing type produced at the time. It wasn’t until the mid-18th century when John Baskerville published his 1757 edition of Virgil that a new typeface appeared in England which adopted these ideas, and heralded a change [fig 5].

Baskerville was an industrialist, turned writing-master and letter-cutter, who aged forty-four redirected his attention to printing. His determination to improve the quality of typography and his ambition to print a sharper, finer letter, required him to make several crucial changes, not only to his types but also to the printing ink, the press and the paper he used. Baskerville’s appreciation and use of type was clearly influenced by the calligraphy that he had learned and subsequently taught, and popularized through the work of George Shelley and George Bickham. Accordingly, his type demonstrates an increase in contrast between thick and thin strokes, sharper serifs, and a shift in the axis of rounded letters to a more vertical position. 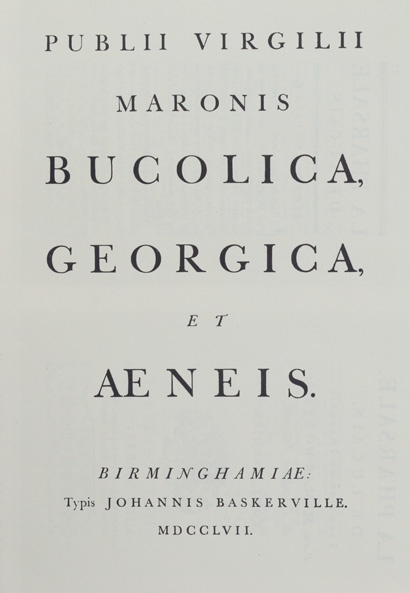 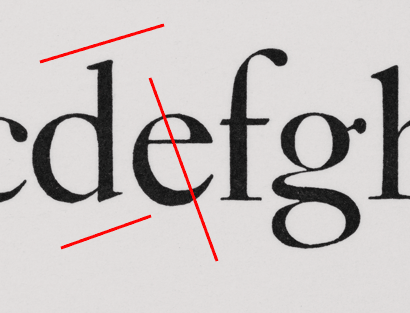 6. The Caslon type showing the angled axis and serifs of the Old Face letter 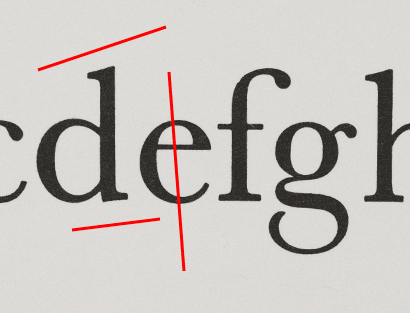 7. The more vertical axis of the Transitional type seen in Baskerville 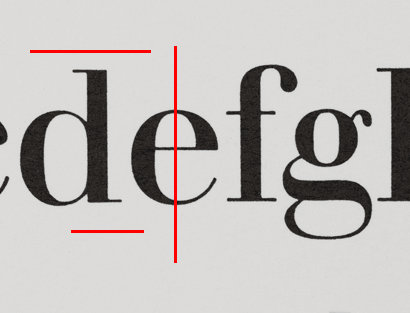 8. The rigid vertical and horizontal structure of the Moderns, shown here in Walbaum

The Baskerville type is classified as Transitional in recognition of its stylistic departure from the types before it and its clear signalling of what was to come. Characteristics include a more vertical axis, a higher contrast between the thick and thins, and a sharper but fully-bracketed serif. Lasting only a few decades at most, these types bridged the period between the Old Faces and the onslaught of the Moderns [figs 6–8]. 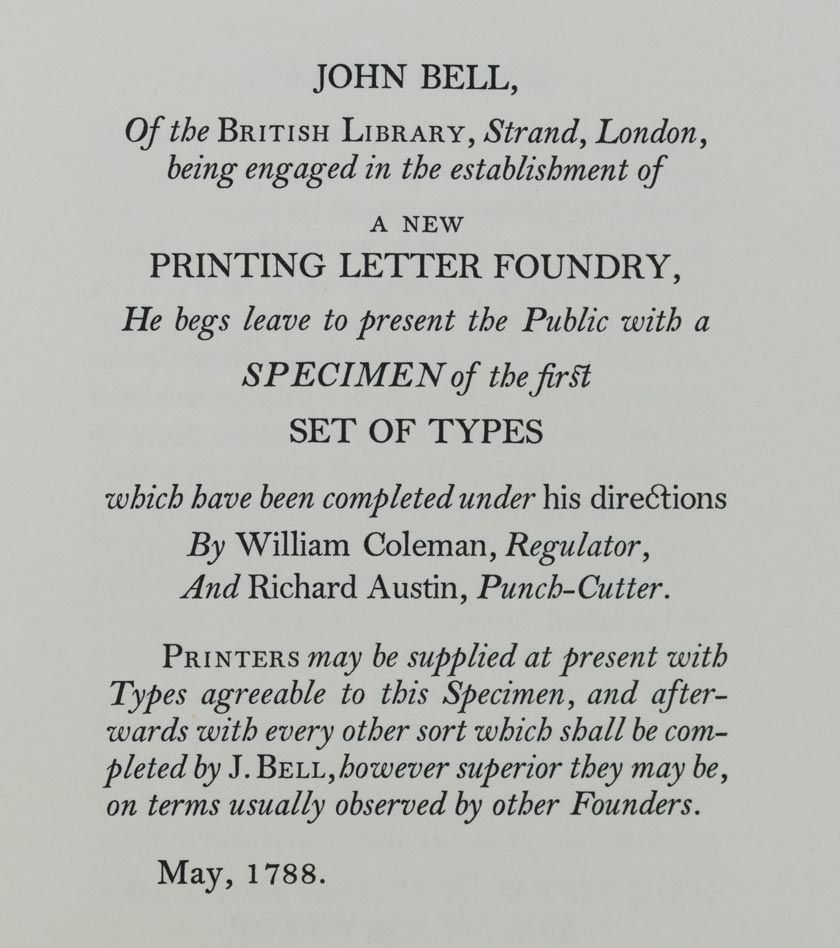 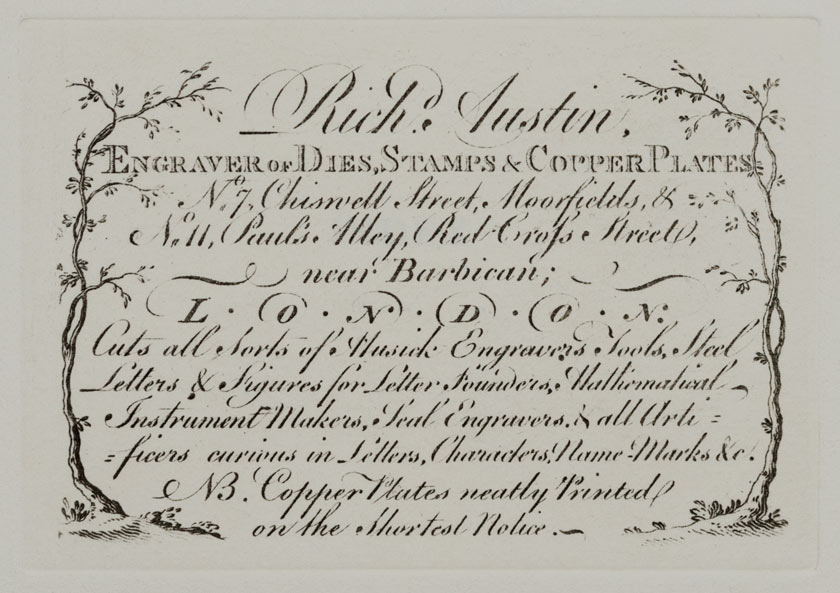 Richard Austin was named as ‘Punch-Cutter’ at John Bell’s British Letter Foundry [fig 9]. He was at the beginning of a very successful career and would go on to produce several important typefaces. Under the direction of Bell, Austin executed a type of remarkable quality. As a professional copper-plate engraver he possessed the deftness of skill required to cut the punches [fig 10], and a keen eye to achieve the fluidity and brilliance of type image best printed and seen on the smooth papers being introduced at the time. Stanley Morison called it England’s ‘first independent design’, and went on to suggest that it was the first English Modern face. However, it is perhaps best described as a late Transitional and maintains a balance of elegance and warmth very much of its time [fig 11].

11. The Bell type ‘composed in new founts cast from the original material by Stephenson, Blake and Company’, Morison, A tally of types

Although very English in appearance, a range of influences from various French type foundries can also be seen in the type. Morison’s examination of it shows that the low crossbar of the e is found in types cut by François-Ambroise Didot. The curly tail of the capital R originated with Robert Grandjean and was also used by Fournier and Didot, and occasionally by Baskerville. Bell invented a curly tailed K to pair with that of the R, the same curly tail is also found in the lowercase k. The short-ranging J developed by Grandjean in the romain du roi is also present [figs 12–14]. 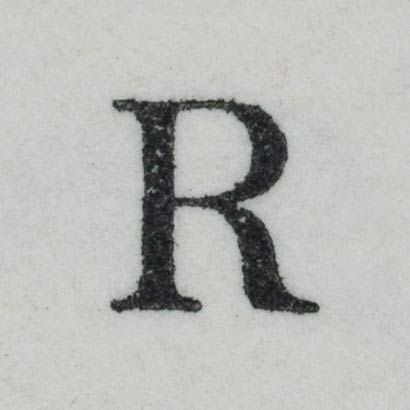 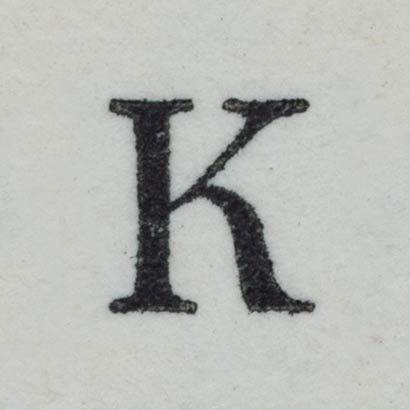 13. Capital K designed to pair with the R 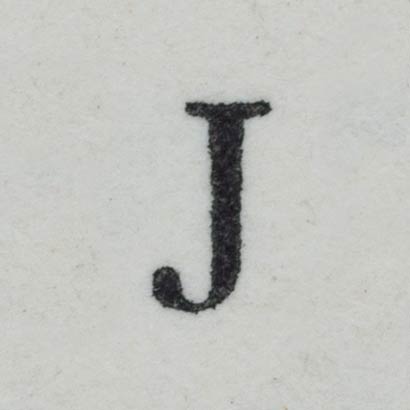 14. Short-ranging J that sits on the baseline

The lining (or ranging) figures used by Bell are a significant innovation. Seen previously in William Caslon II’s large poster letters from the mid-1770s, Austin sized these modern figures to fit perfectly with the lowercase and not overpower in a block of text [fig 15].

16. Early ideas from 2012 show a similarity of curve structure to that of our Fenland type 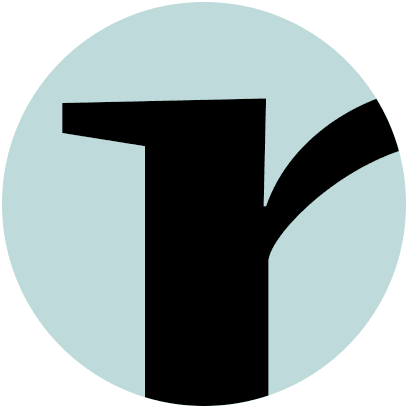 17. Top serif of a lowercase n 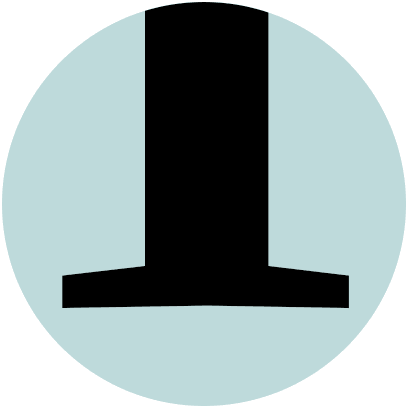 18. Base serif of lowercase i

Early ideas for Hawkland go back to 2012 as our Fenland sanserif type was nearing completion [fig 16]. These tentative sketches for a serif letter based on Fenland were put to one side and resurfaced a few years later in early 2015. The serif structure is delicately modelled not flat and severe as seen in a Modern type [figs 17 & 18]. The angular and aggressive forms were slowly tamed; lettershapes that appear visually interesting in a sketchbook are often weak when made digital and seen alongside other lettershapes [figs 19–25]. The regular and italic reached an advanced stage only to be placed on hold due to other work commitments. Development started again in mid-2017 and the scope of the type was expanded to include a Fine cut, which pushes the contrast, details and style more closely to a Modern. 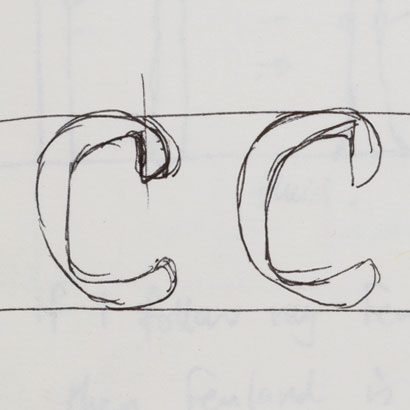 19. Additional sketches from 2012 indicate a strong shift of weight along the curve 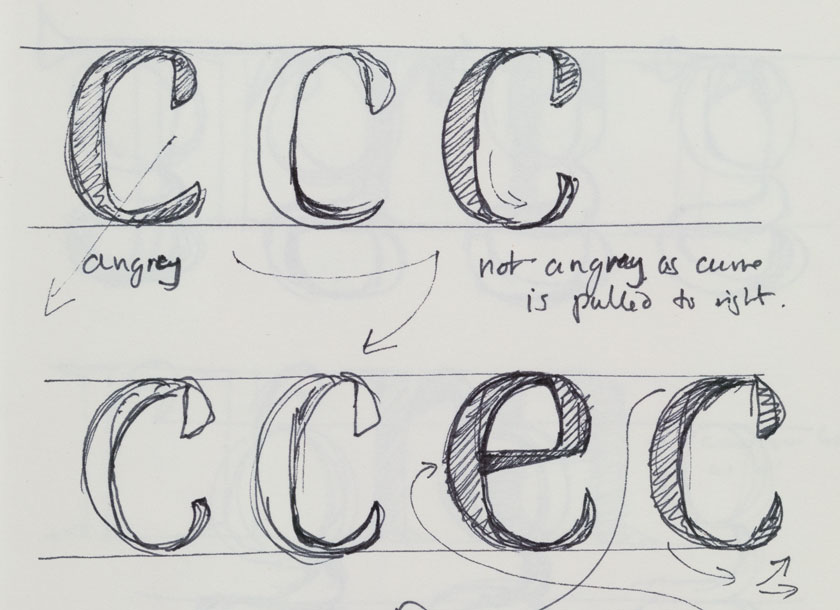 20. April 2015 shows the development of the main features of the c 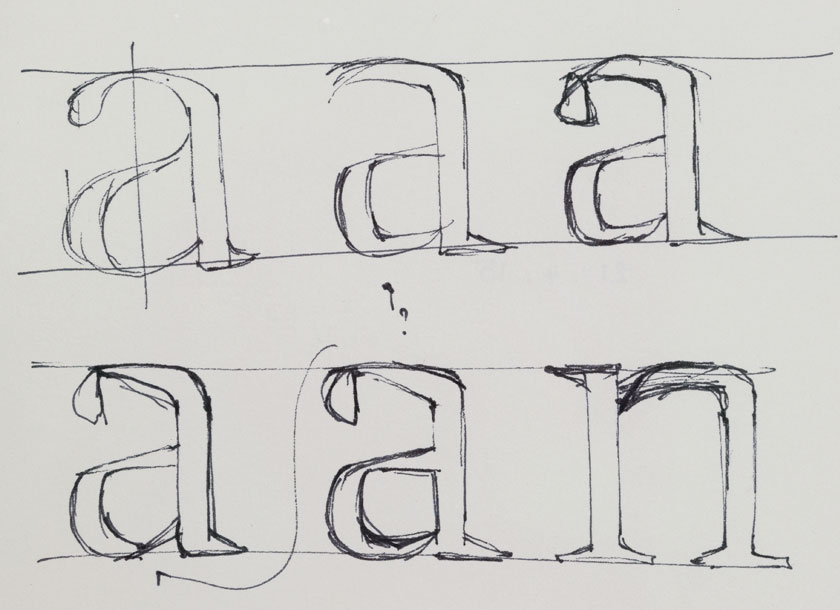 21. The vertical axis of a Baskerville-style a against ideas for Hawkland a 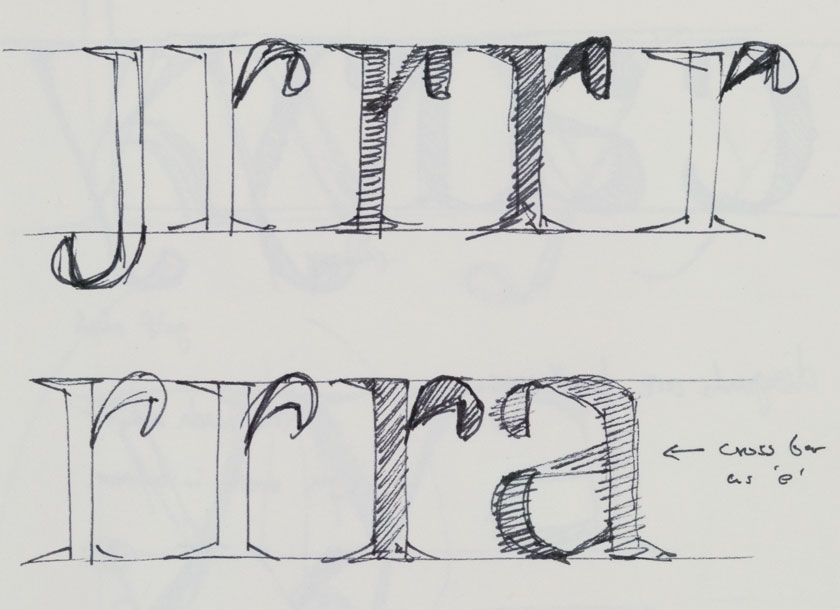 22. Sketching the details and weight shift of the r 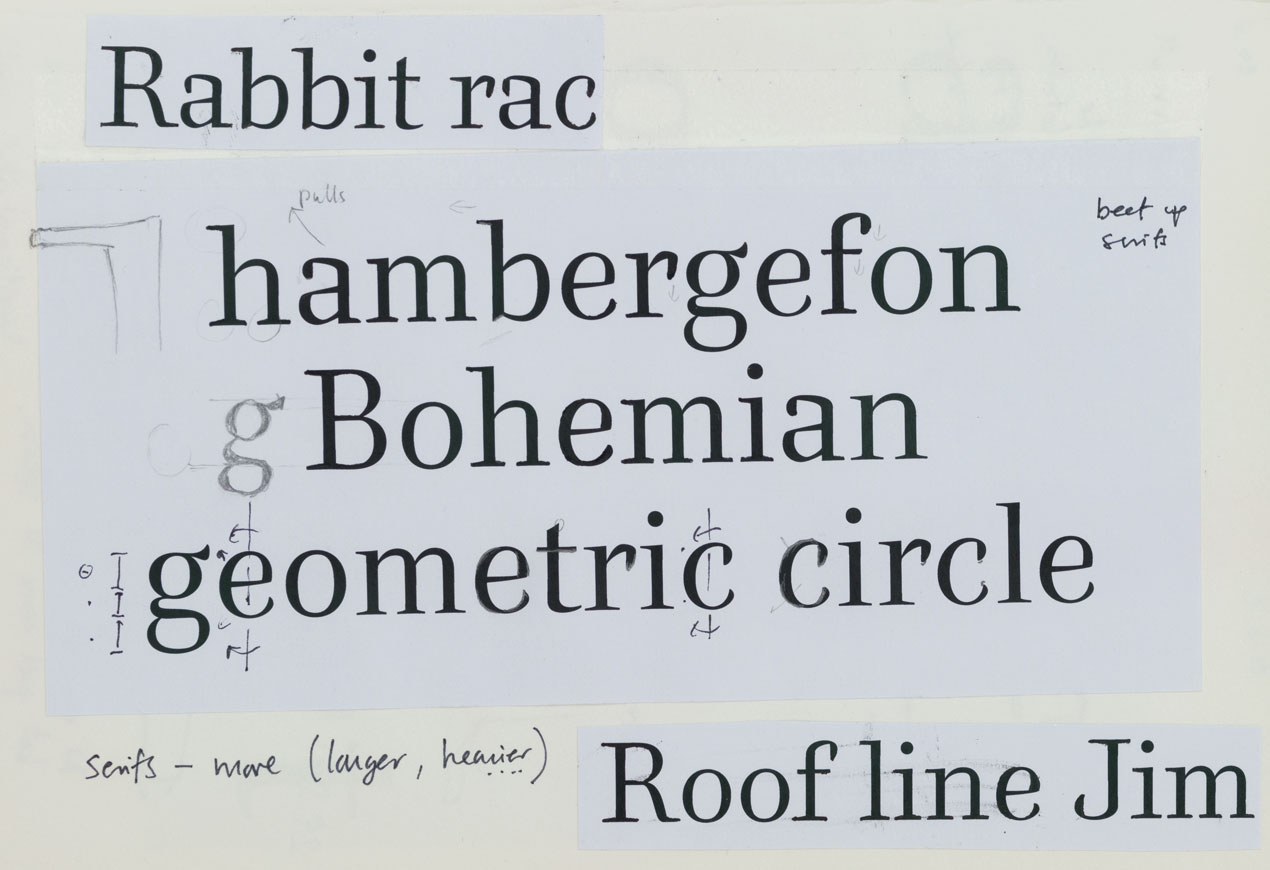 23. Initial digital version in May 2015 shows the aggressive and disjointed shapes 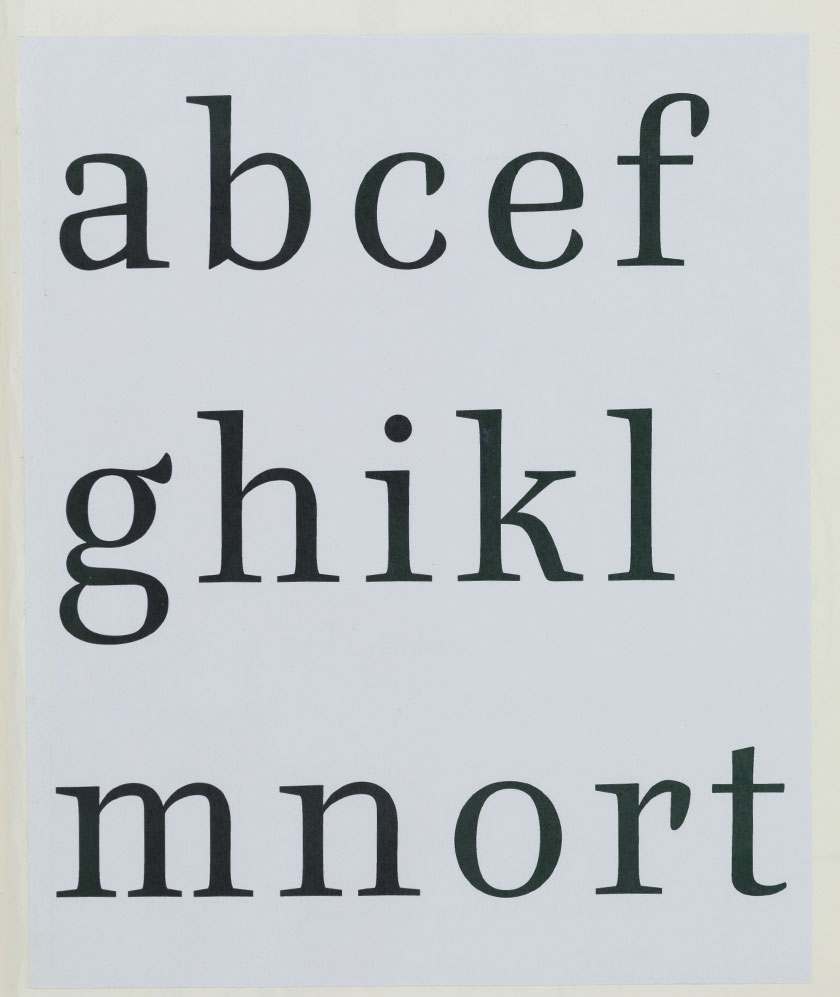 24. A softer version showing modelled stems and fuller serifs, but the vibrancy is lost 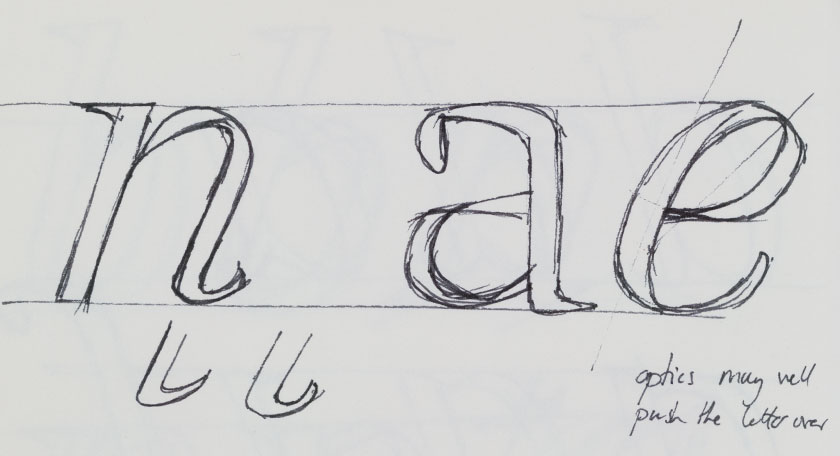 25. Sketches for italic n and e to see what could happen to the weight shift of curves

One of the initial objectives was to reflect the personality of a late Transitional type but with perhaps a little of the finesse that the copper-plate engravers were able to achieve [figs 4, 30 & 32]. Details that Austin added to his type for John Bell are brought to Hawkland; the curly tails of R and K, the short ranging J, and lining figures. There’s a subtle shift of weight in the construction of the arch and terminal detail of a letter, which is reinterpreted from the Fenland typeface [figs 26–29]. 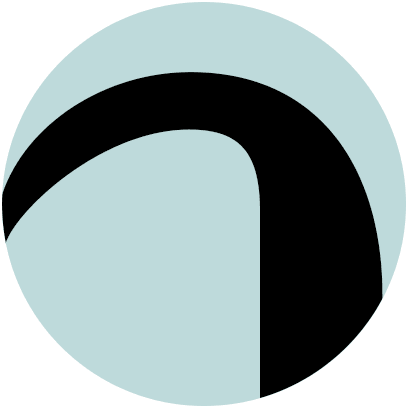 26. The curve of the n arch in Hawkland shows a subtle shift of weight 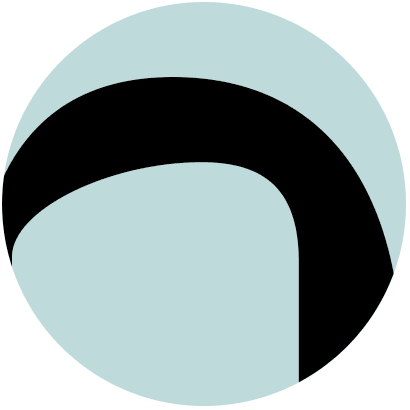 27. The extreme weight shift of the n arch in Fenland 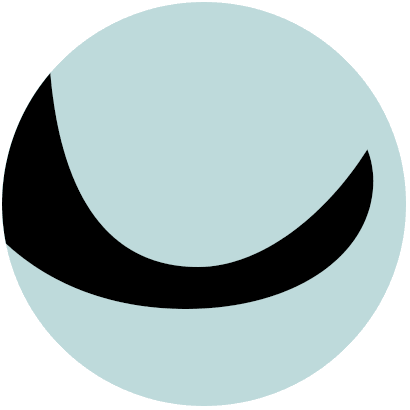 28. The terminal stroke of Hawkland c has a slight weight 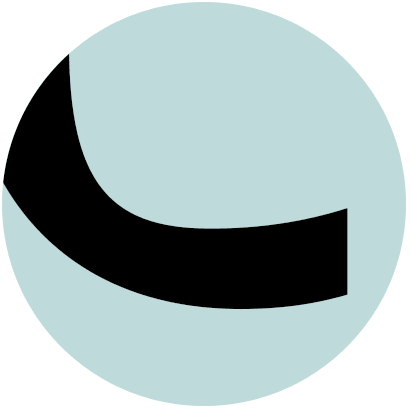 30. Detail of the engraved title plate from The Universal Penman by George Bickham, 1743

In Britain, the italics of the Transitional period didn’t follow the structure of those being produced in France and first introduced by Pierre Simon Fournier, who adopted the rather flat lead-in stroke to several lowercase letters that was distinctive in French calligraphy of the time [fig 31]. This flat lead-in stroke, or serif, on the lowercase was unseen in Britain, where italics instead reflected the style of the English Roundhand where the lowercase is more closely tied to its particular calligraphic forms and rhythms [figs 4 & 30]. 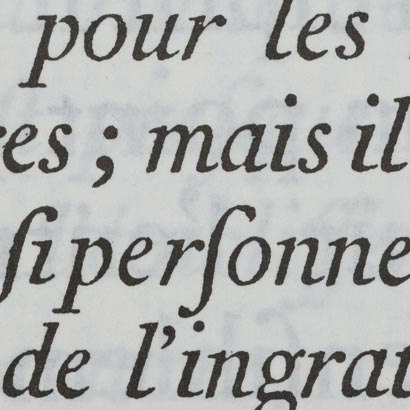 That said, George Shelley showed this feature in his Natural Writing c.1709, as did Charles Snell in his Standard Rules of c.1714, together with some precise guides to construction [fig 32]. Hawkland italic adds a serif at the top left of several lowercase letters. This introduces a degree of modernity as well as reflecting the crispness of the engraved copper-plate process and skill of the writing-masters. Many of these details and ideas are further enhanced in the Hawkland Fine family, which is primarily designed to be used at larger sizes of display and headline.

Clair, Colin. A history of printing in Britain, Cassell, 1965

—. ‘The “romain du roi”: a type made for the royal printing house of Louis XIV’, Printing for kingdom, empire, and republic, Grolier Club, 2011

Updike, D. B. Printing types, their history, forms and use, Oxford University Press, 1937