The design of Fenland

It details a comparison between methods of transport and typeface style with the aim to evoke a period feel. The modes of transport shown progress along the time line and end with a space rocket and question mark. We are edging more and more into the future, yet we’re still using typefaces from the last century [fig 1].

1. Comparing the development of transport and lettering, Adrian Frutiger

How many more variations of the Helvetica idiom can there be? How many more revivals of the same old, same old do we need? Throughout the 20th century designers have asked the question “What could the type of the future look like?”, surely part of being a designer is to dream of possibilities? When Fenland was published, information on its design was purposely not given. People were left to make up their own minds which, like the typeface, proved interesting. 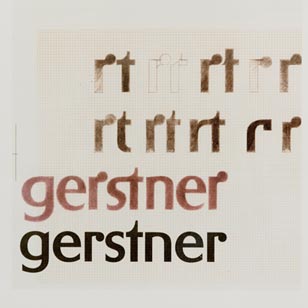 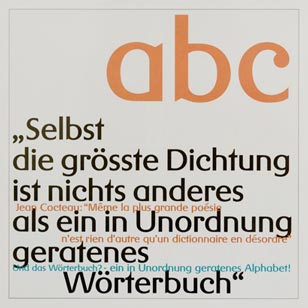 Back in 1935 William Addison Dwiggins argued about the type style born of the Renaissance: “You don’t live in Venice in 1500. This is 1935 . . . take letter shapes and see if you can’t work them into something that stands for 1935.” He went on to suggest; “Electricity, sparks, energy – high-speed steel – metal shavings coming off a lathe – precise, positive – say it with a snap . . . Take your curves and stream-line ’em. Make a line of letters so full of energy that it can’t wait to get to the end of the measure.” 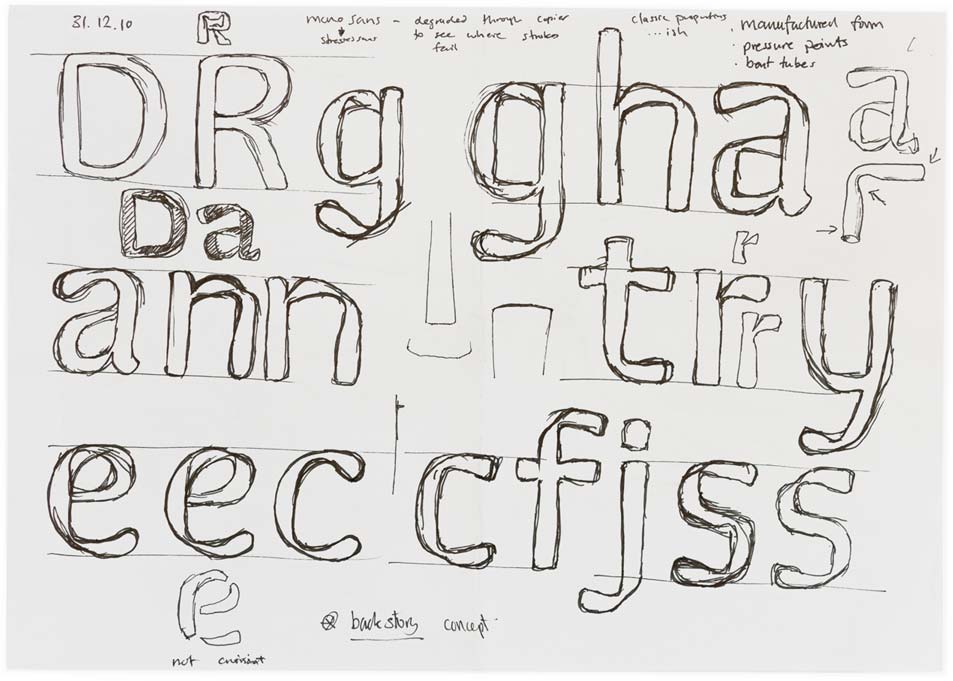 In About alphabets from 1960, Hermann Zapf says “The type of today and of tomorrow will hardly be a faithful recutting of a 16th century roman of the Renaissance, nor the original cutting of a classical face of Bodoni’s time – but neither will it be a sans-serif of the 19th century.” In 1963 the Swiss designer Karl Gerstner wrote “doubtless the sans serif is not the end of the development, but rather an intermediate station”. His attempt to ‘breathe new life into the familiar letters’ resulted in the Gerstner Original typeface, published in 1988 [figs 2, 3]. Fenland continues this enquiry and is the result of a challenge I set myself to find a different direction, away from the self-referencing stagnation that much type design finds itself in [fig 4]. 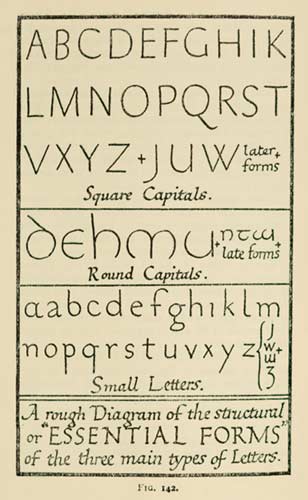 The ‘Essential Forms’ described in Edward Johnston’s book Writing & illuminating & lettering represent the purest idea of a letter [fig 5]. This skeleton is dressed in many ways to evoke a different style, look and feel, yet the underlying structure is ever present. How could a letter shape be readdressed, be re-dressed. Perhaps through degradation of the image? Lettering on gravestones change through the effects of natural weathering. Inscriptions seen on tombstones laid flat on the floor of churches are worn away with passing footfall [fig 6]. Could there be a way to mechanically degrade the image, such as photographically enlarging and reducing again and again. However, the result of any applied process to the original letter was expected. 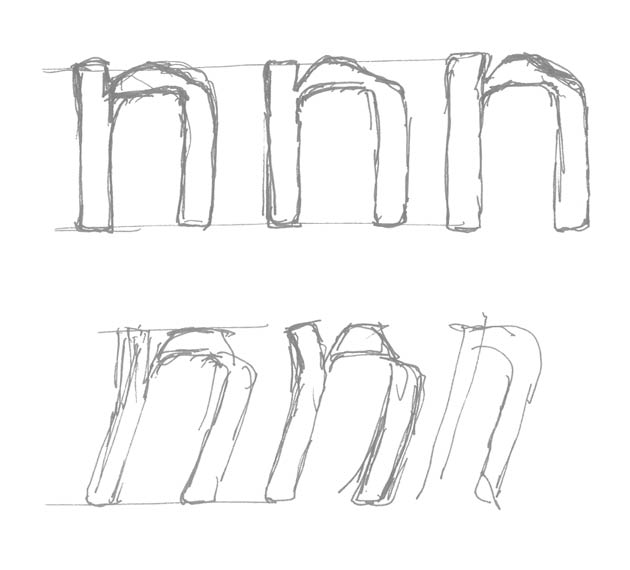 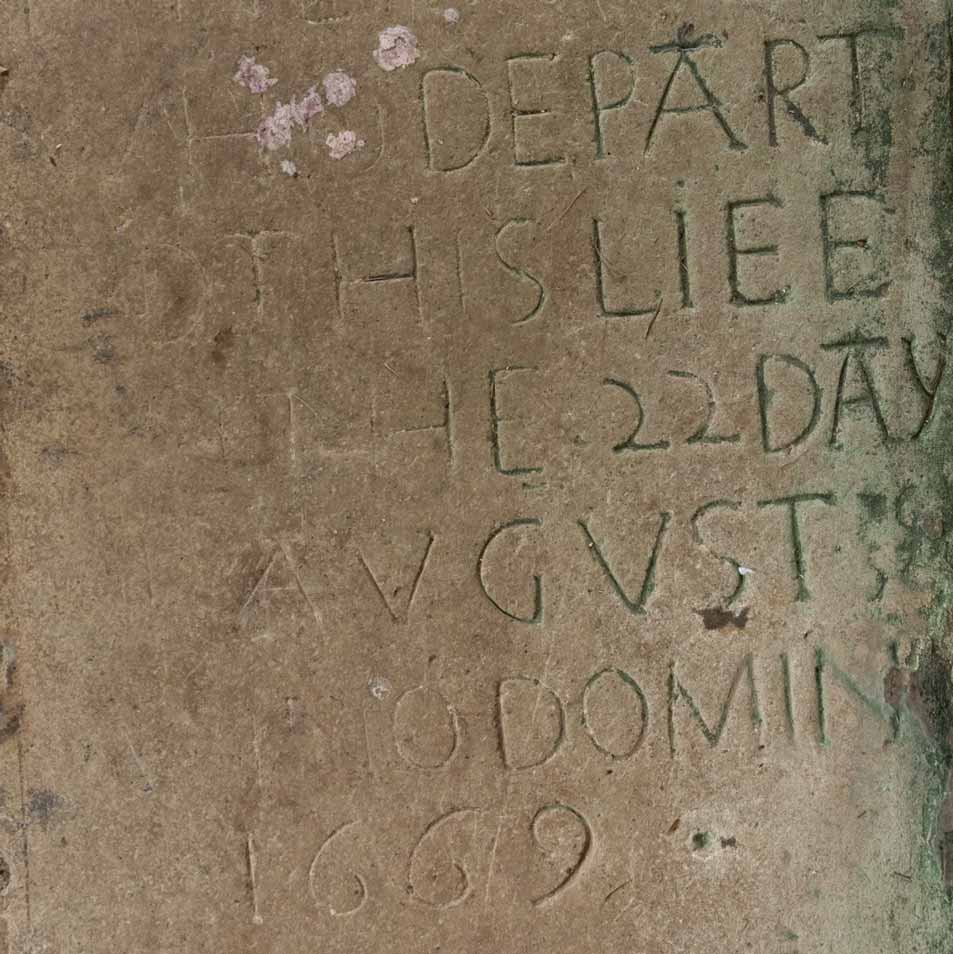 6. Tombstone inside the Parish church of St John the Evangelist, Countisbury

The thing that had to change was the original base skeleton itself. Dressing a different letter skeleton could result in a different style, look and feel. The idea of degradation, gave way to one of different construction. A trip to the David Mellor factory at Hathersage in the Peak National Park presented a solution. The organic, soft tactile forms of his metalwork defy the hard, rigid, cold substance of which they are made. His cutlery, especially, possess elements similar to those found in letters – stems, curves and the subtle fluctuation of thickness [fig 7].

The mechanical process of manufacture seemed an interesting notion to explore. One way to manipulate a shape is to bend it. When a tube is bent, the outside of the curve stretches and the inside collapses, creating a thin point on the curve [fig 8]. 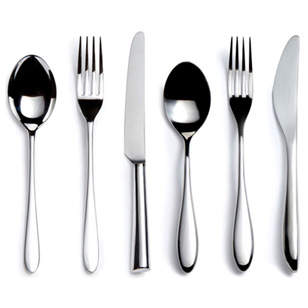 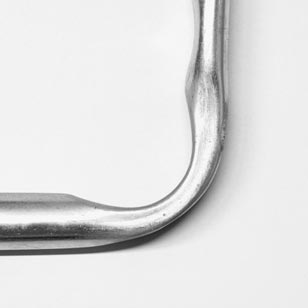 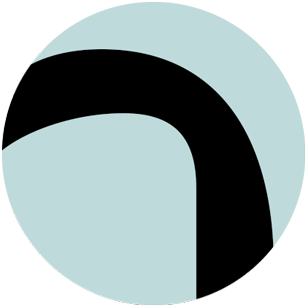 9. A bend incorporated in the arch of the n 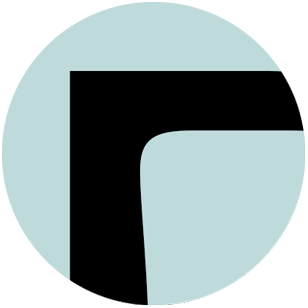 10. A bend within straight stems 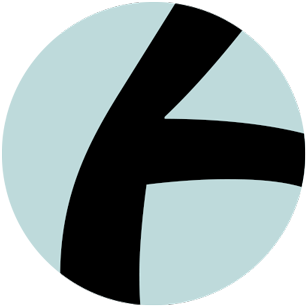 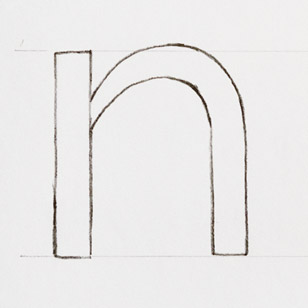 12. The general structure of n 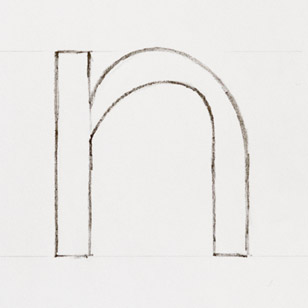 13. The same structure but with a shifted top curve

Applying this idea to a letter n showed some merit but, as with all type designs, more features are needed; it can’t rely on one trick [figs 9, 10, 11]. What about letters that don’t possess curves?

Looking at the n, it was obvious that it functioned as an n; there is a stem and an arch – they are just put together differently [figs 12, 13]. The weighting of the curve is no longer informed by the movement of the pen. If the alphabet was constructed instead of written, then the letters could be freed from the artefacts of writing. 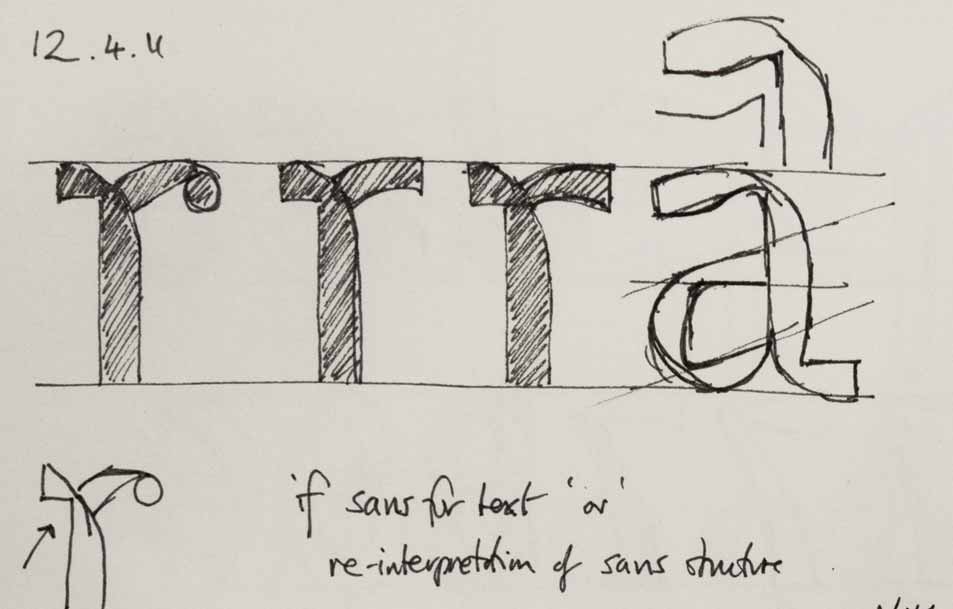 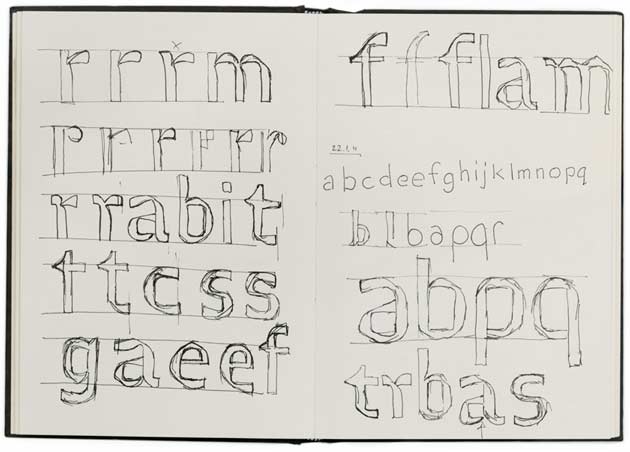 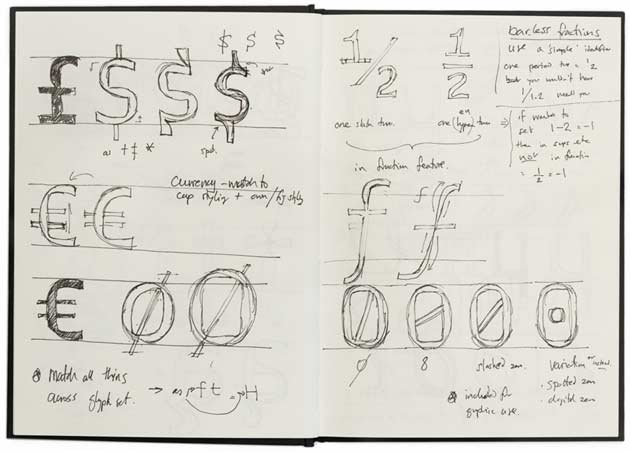 16. Expanding the ideas across the character set 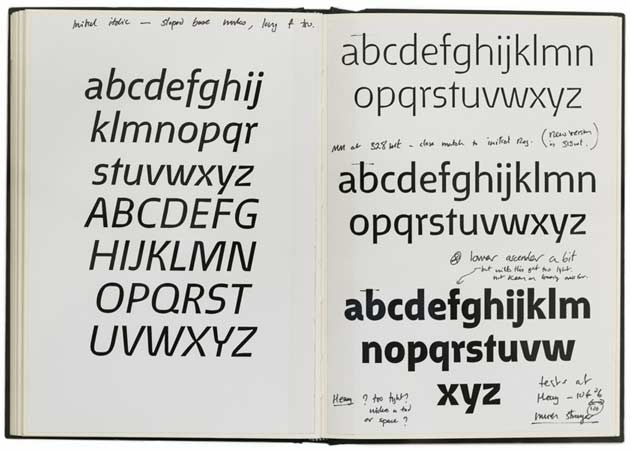 17. Review of the digital development 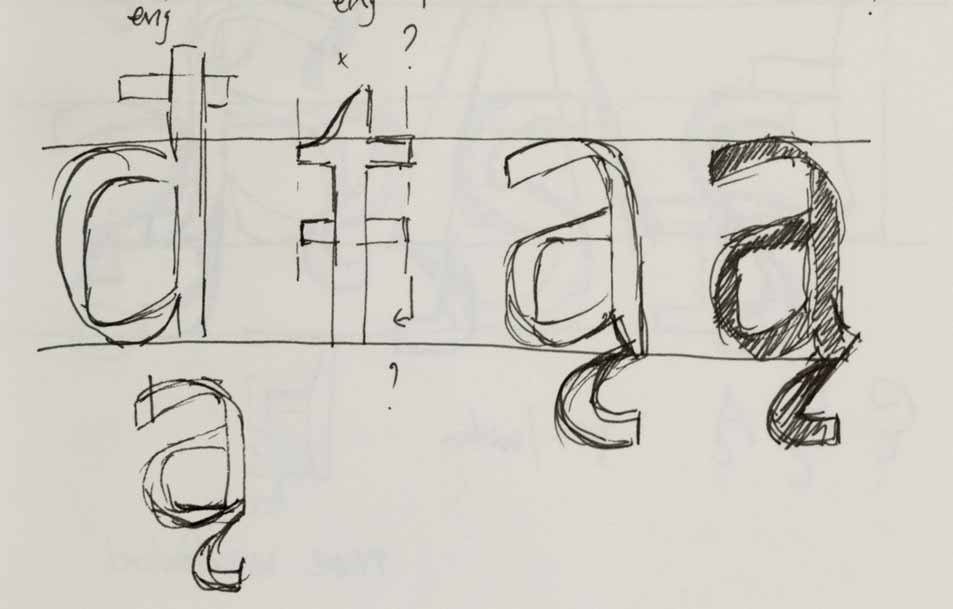 What does manufacturing and construction mean? Does it mean simplification? Simplification would result in an overly stylised pattern to text and readability would suffer. It would make the typeface less useful as continuous text. Each letter needed to be treated, not only as part of a word unit but also, as an individual shape and not flipped or repeated versions of the same thing [figs 15, 17].

Some elements of the Essential Form are required, chopping off too many bits unbalances the shape. However, some letters do benefit from reduction. The t can simply be made as a cross, but balancing these two strokes needs careful attention to avoid it becoming a symbol. A curve detail was added to the top to echo the bend seen elsewhere [fig 19]. This flexible approach to a curve is further developed in the capitals, where it appears on the inside of corners such as D and E [fig 10]. Fenland is complimented with a sloped roman italic and the whole family comprises of seven weights from ExtraLight to Heavy. 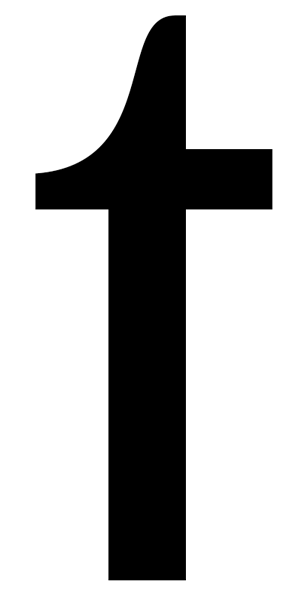 19. Simplified structure of the lowercase t 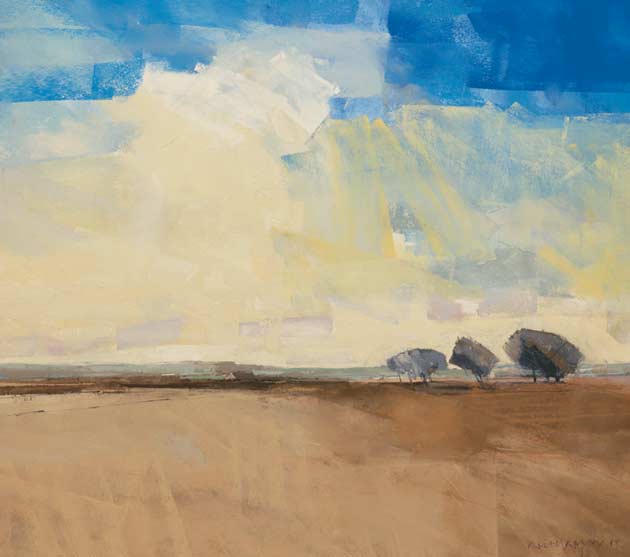 This pastel painting by the artist Keith Roper is titled Late Summer Nocton Fen. It visualises what the typeface embodies – abstract to some degree but instantly recognisable. There’s nothing there, except for the trees, yet it is perceived as a landscape [fig 20].

Zapf, Hermann. About alphabets: some marginal notes on type design, The Typophiles, 1960