The design of De Worde

1. Working up a heavy lowercase r

Italic printing type originated in Venice at the printing house of Aldus Manutius.

The first italic was cut by Francisco Griffo and used in 1501 [fig 2]. We had to wait 27 years until 1528 to see the first use of italic in England, this was by Wynkyn de Worde [figs 3, 4]. He possibly obtained his type from France. It’s more typographic than Griffo’s and like all the others at this time, was only lowercase. Italic capitals had not been invented so roman upright capitals were used. Today we think of an italic as a support style for a roman typeface, to provide emphasis or contrast in text. Yet the first italic was conceived as a stand-alone face, designed for a series of Latin classics published in a new, small format. It’s widely accepted that italic is more economical in line length, allowing for more type to the page. Less paper to use and less pages to print. Though this may not be the real reason for its creation; the jury seems to be out on this one. It may simply be that the style is less formal and so more suited to this idea of ‘pocket classics’. 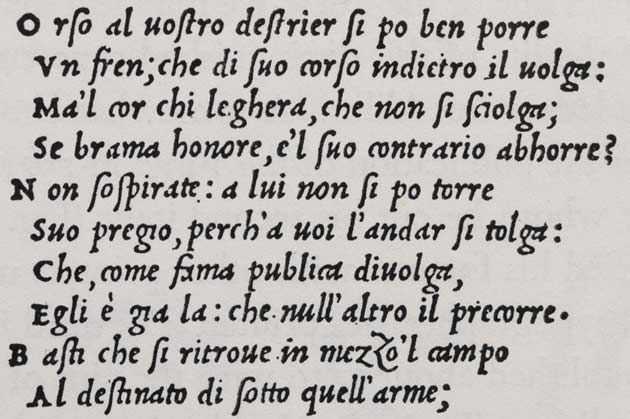 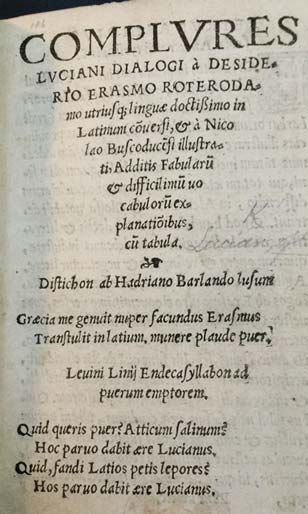 As with many of the early italics, the one de Worde used imparts a chaotic rhythm as it bounces and bumps along the line. This may be down to technical limitations, quality of printing and the skill of the punch cutter [fig 3]. All the same, looking closely at the italic, several features can be picked out. One key element is the long serif to the ascender of the lowercase l. Another is the expressive construction of the p, with its short ascender and entry stroke to the bowl which breaks the stem on the left. The construction of the m is interesting and slightly reminiscent of the gothic style where the second arch is made differently to the first. Usually (and I say this with caution) both arches of the lowercase m are treated the same – the repeated rhythm is a key asset. But here, there is a shift in movement [figs 5—9]. 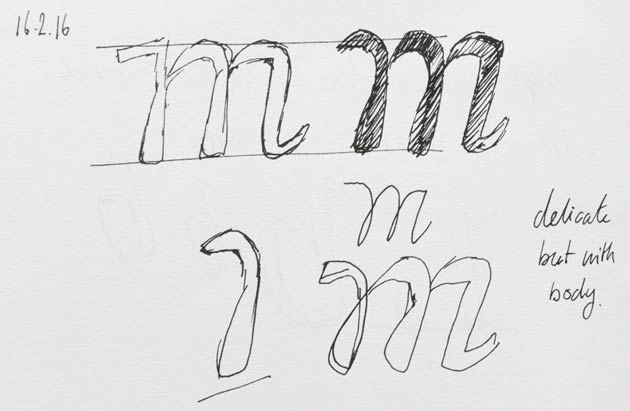 6. The long top serif of the lowercase l and the twisting in the leg of the n

7. The lowercase p with a short ascender, entry stroke for the bowl and a foot serif to the right

8. The small ascender of the q

9. The m with two different arches, reminiscent of gothic styles

Notes were made which lead onto sketches and in turn onto pencil drawings on tracing paper. These pencil drawings formed the base of De Worde [fig 10]. These aren’t produced for digitisation, but as an easy way to try out letter combinations in order to make decisions more quickly. The process forces the design stage to slow down, allowing for more attentive consideration. Drawing this way is also quite therapeutic. I find that the combined action of moving the pencil, hand and arm helps to ‘see’ the shape. Working directly on screen is quite numbing, where the connection between eye, hand, arm, pencil, paper is broken.

Working on the computer too early forces you to make the shapes perfect, way before they’re ready to be set in stone. It’s good to keep things in flux for longer at the start of a type. As a result, unexpected shapes and ideas are stumbled across, and as more letters are tackled, more core elements are brought together to form the DNA of the typeface. The integrity of a type design relies on building and developing a set of features which are played out across the character set. The pencil sketches maintain the warmth and humanity. They are the fuzzy, foggy, ‘something like this’ realisation of the design intention [fig 11].

The first italics consisted of lowercase only with upright roman capitals, yet nowadays we require italic capitals. Should De Worde’s capital letters be a sloped roman or more cursive in structure? This seemed an odd question as the lowercase isn’t a sloped roman, so why should the capitals be? However, there appeared to be no contemporary calligraphic model for italic caps to follow. There are embellished and swash capitals, but nothing as restrained as a simple (perhaps more typographic) italic cap. 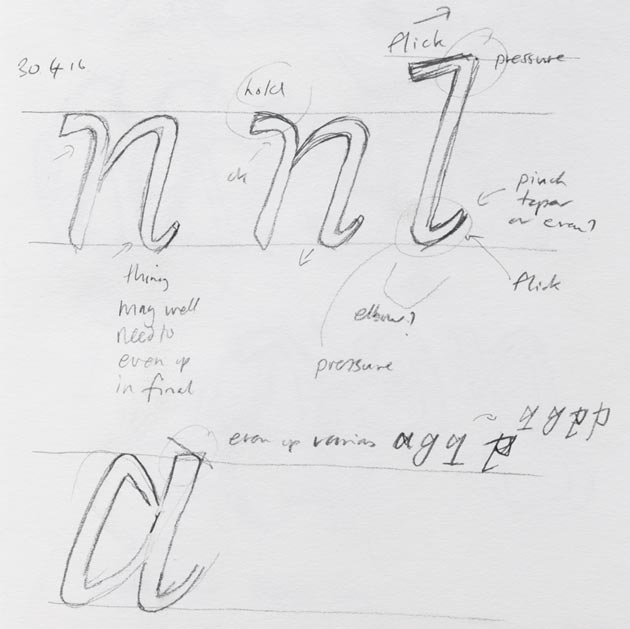 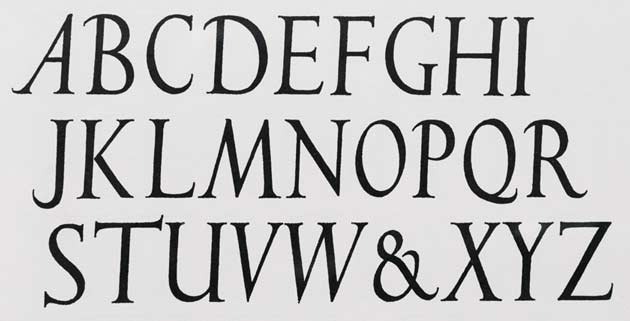 Eric Gill’s italics have always impressed me with their individuality and restraint. The design of his italic capitals show a different construction to several of the letters than might generally appear alongside the same roman letter. For instance, his italic B, D, P, R carry an expressive entry stroke at their top left. They aren’t just sloped romans and neither are they swash capitals [fig 12]. 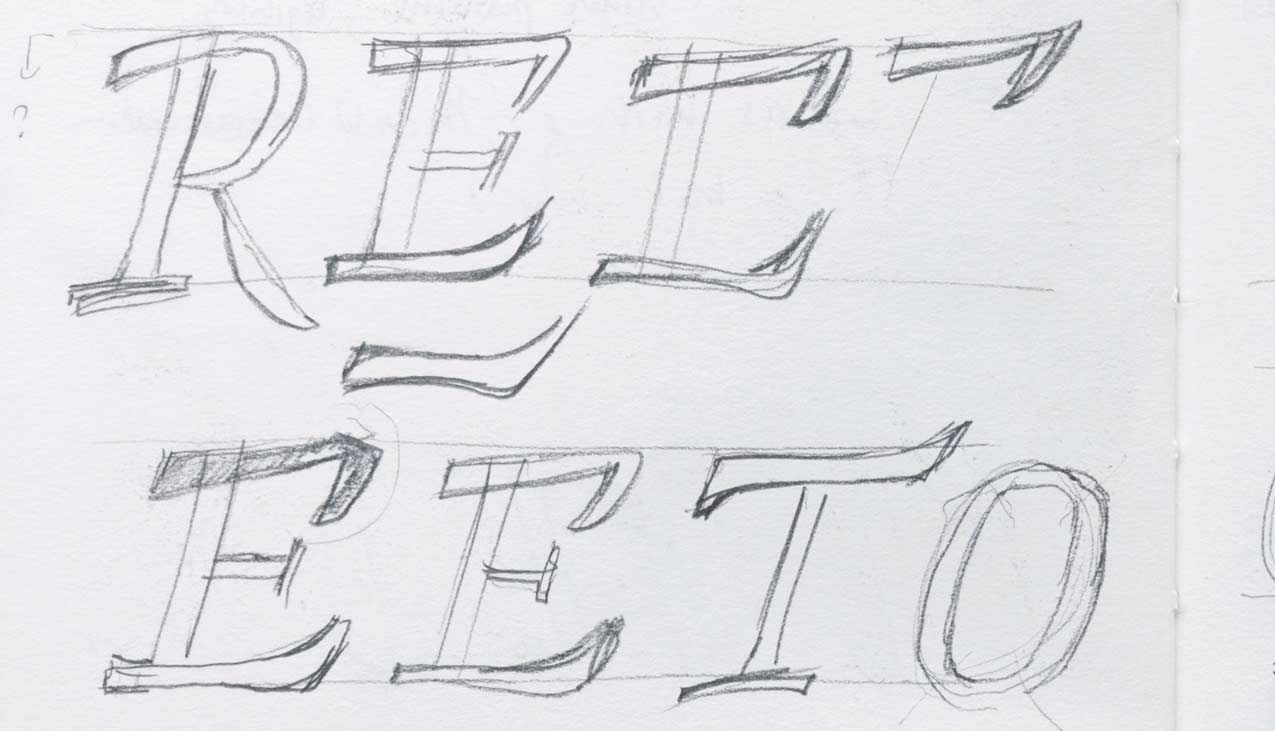 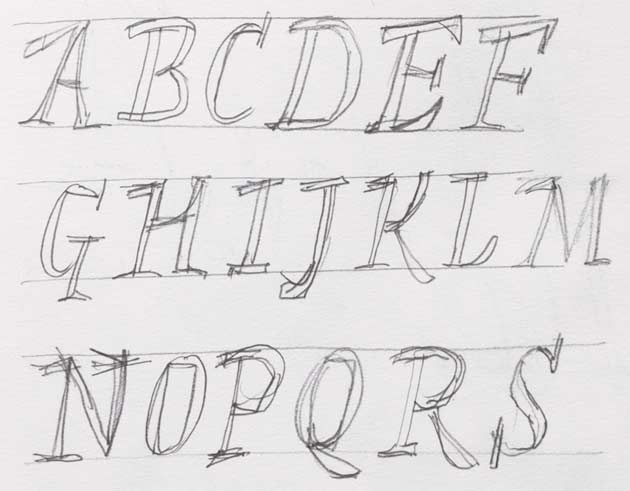 14. Initial ideas for the capitals

When creating a lowercase, several key characters are focused on, typically these may be a, n, f, g. These carry the identity of the design. It’s logical that the same applies to the capitals, but not necessarily the same letters. One could argue that key characters in the capital set could include E, R, G, M. It seemed logical to look to De Worde’s developing lowercase and utilise some of the features found there. Reinterpret them for a capital model and then bring in new features that could become part of the feature set [figs 13, 14]. 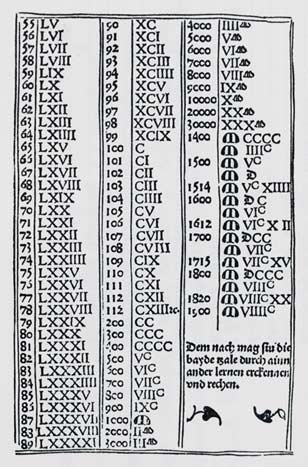 15. A table for learning the Arabic system of numerals, 1524 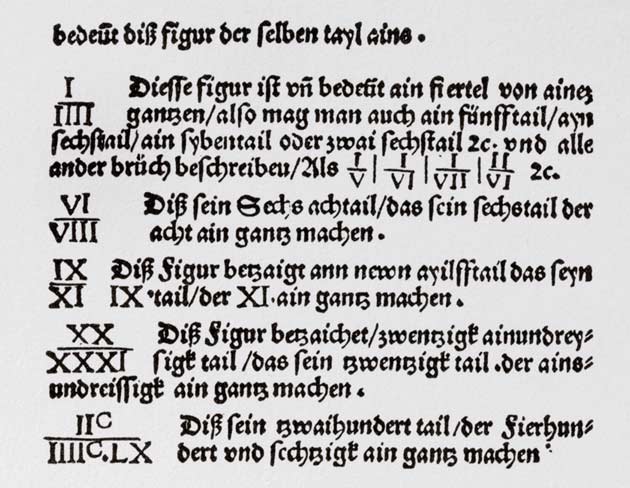 Another interesting conundrum of the early 16th century is that de Worde was printing at a time when Arabic numerals were gaining popularity over Roman numerals [figs 15, 16]. Yet it was common that both numeral styles were used together. Eventually, Arabic numerals won out as they could be stacked and used in tabula setting. Seen alongside Roman numerals, they’re a very elegant system comprising of ten discrete digit shapes which combine to create larger numbers with distinct place value. Importantly, there’s also a zero which the Roman number system doesn’t have. Stylistically, the shapes of numbers share little with the lowercase or capitals. In order to visually make them part of the same typeface, the numbers were developed from elements and stroke treatments found in the lowercase and capitals [figs 17, 18]. 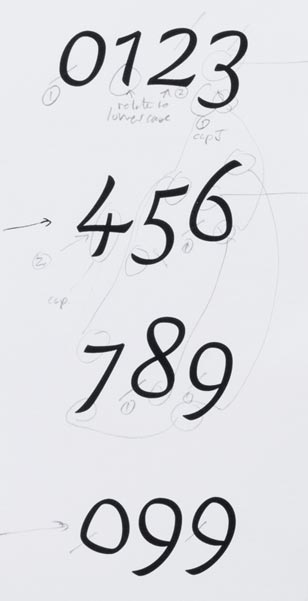 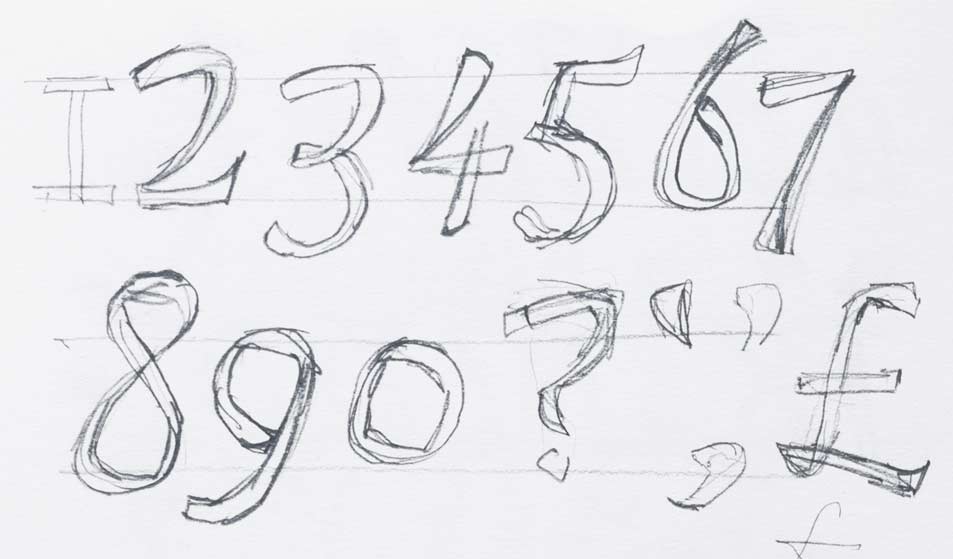 18. Sketches for the numerals

Kaufmann, Ueli. The design and spread of Froben’s early italics, University of Reading, 2015